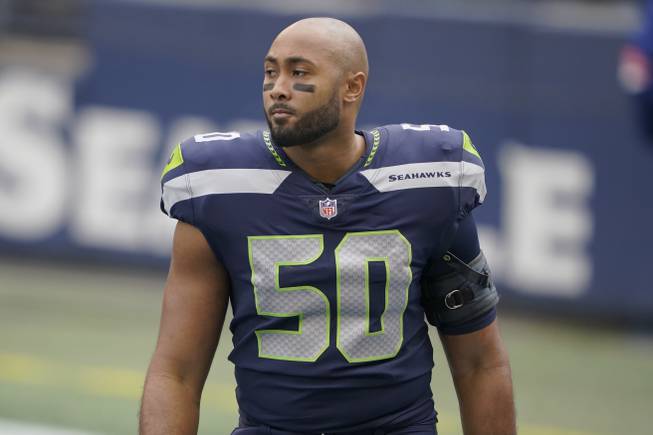 Seattle Seahawks outside linebacker K.J. Wright stands on the field before an NFL wild-card playoff football game against the Seattle Seahawks, Saturday, Jan. 9, 2021, in Seattle.

The saga is no longer continuing. It’s now culminated. Veteran linebacker K.J. Wright has signed a one-year contract with the Las Vegas Raiders, according to multiple reports.

“That’s news,” linebacker Denzel Perryman said in a news conference Thursday right as word spread. “That’s good. That’s more experience, more excitement. We know what type of player he is and what type of guys we’ve got on this team so that’s going to be exciting.”

Wright and Perryman, whom the Raiders acquired via trade from the Carolina Panthers last week, are late additions to the Las Vegas roster spurred by injuries at their position. The Raiders lost both presumed starter Nicholas Morrow and key backup Javin White at linebacker two weeks ago, which led to bringing in both veterans.

“You get punched in the gut a little bit with some injuries at linebacker,” Raiders general manager Mike Mayock said Wednesday. “But when you lose Nicholas Morrow, when you lose Javin White, are we still open for business potentially? Yes, we are.”

During the same news conference, Mayock left the podium to answer a call and referred to it as, “a continuing saga.” Hopeful fans linked the abrupt exit to the Wright situation, which now seems quite likely with a contract agreement in place.

Wright visited the Raiders’ Henderson headquarters last month but departed without a deal. The 31-year-old Wright, a former Pro Bowler who’s spent 10 seasons in Seattle, is expected to fill a starting role next to second-year Raider Cory Littleton immediately.

Perryman could also start depending on how defensive coordinator Gus Bradley wants to utilize him. Morrow had initially been tabbed a starter, but it’s unclear whether the role will now be taken over by Perryman or Nick Kwiatkoski.

“Getting Denzel Perryman was big,” Raiders coach Jon Gruden said on Thursday. “He’s a middle linebacker that gives us some playing experience and system intelligence.”

Gruden declined comment on Wright since the signing isn’t yet official other than saying he’s aware the team has been, “looking at his situation.”

Both Wright and Perryman have played under Bradley before, making their transition to a new team easier.

Wright broke into the league when the Seahawks drafted him in the fourth round out of Mississippi State in 2011 under the watch of Bradley at defensive coordinator. The two spent two seasons together before Bradley departed for the head-coaching job with the Jacksonville Jaguars.

Perryman has played alongside Bradley more recently, spending the last four seasons with him as part of the Los Angeles Chargers. He’s started practicing over the last two days and declared himself already “comfortable” with the Raiders, a team he initially thought he might play for earlier this year when he was a free agent.

“Honestly when I found out Coach Bradley and the whole defensive staff somewhat came over here, I kind of thought maybe I was going to end up here during that time,” Perryman said. “Got signed with Carolina and things just worked their way out, (now it’s) right back where I’m comfortable, where belong I feel.”

There’s been no significant update on the statuses of Morrow (foot) and White (knee) but both are expected to be sidelined for an extended period of time with the former out “a little bit longer,” according to Gruden. They were both having eye-opening training camps before their setbacks, so their losses are a hit, but the Raiders have now rallied to replace both spots.

Linebacker depth shouldn’t be a problem with Wright and Perryman on board.

“I’m still trying to wrap my head around it,” Perryman said of being traded to Las Vegas. “But I’m at peace right now.”