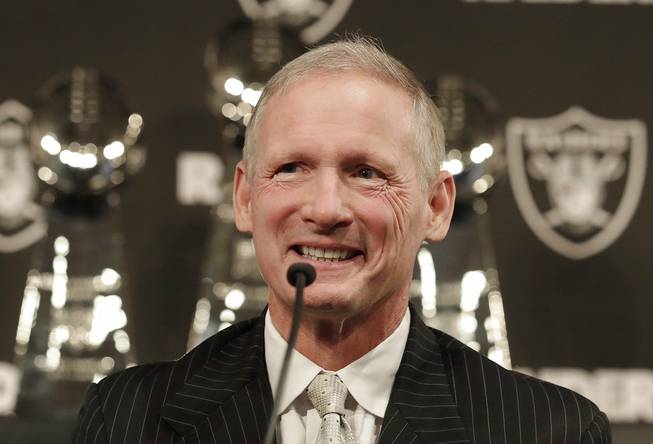 Mayock: Raiders ‘need to be a playoff team this year’

Mike Mayock smiles as at a news conference where he was introduced as the new Oakland Raiders general manager at the team’s headquarters in Oakland, Calif., Monday, Dec. 31, 2018.

Mike Mayock’s post-cutdown press conference had a bit of everything.

Meeting with the media on Wednesday, one day after he and Jon Gruden trimmed the team’s roster to 53 players, Mayock gave a real-time breakdown of how a prospect goes from under the radar to the Raiders’ draft board, offered some homespun wisdom (“My dad used to say, ‘Don’t worry about whether or not the horse is blind, just load the freaking truck’”) and provided a bit of levity — and intrigue? — by excusing himself and stepping away from the podium to take a call after his cellphone rang.

While Mayock didn’t spill the beans on that seemingly urgent phone call, he did touch on a number of wide-ranging topics. The biggest takeaways:

This is a playoff roster

Heading into Year 4 of the Raiders’ rebuild, it’s time for Jon Gruden to make the playoffs.

Mayock made it abundantly clear that the postseason is the only acceptable result for Las Vegas this season, pronouncing the assembled 53-man roster as one that should be playing in January.

“We’re not hiding from expectations,” Mayock said. “I think Jon and I will both tell you that we feel like we need to be a playoff team this year, and I don’t think there’s any doubt about that. You guys are all going to put that in your headlines, and I understand it. That’s what the expectation is. We think we’ve done the infrastructure work necessary to put us in position, and we’ve got to take care of business.”

Mayock has been the general manager for the past three years, and the vast majority of the roster has been turned over in that time. This team belongs to Mayock and Gruden.

Last year the Raiders faltered down the stretch and finished out of the playoffs at 8-8, mostly due to a leaky defense that couldn’t hold up in high-leverage situations. Mayock has tried to address those flaws with big free-agent signings (Yannick Ngakoue) and some seemingly shrewd draft picks (see below).

Will it work? Mayock believes so.

“We’ve assembled 53 players,” he said. “We think we’re going to be a pretty good football team.”

It takes a village to draft a diamond

Everyone around the Raiders is excited about rookie cornerback Nate Hobbs. The Illinois product has done nothing but impress since being selected in the fifth round, to the point where Las Vegas will head into Week 1 with Hobbs penciled in as a starting nickel back.

So, how does a player work his way from being a draft afterthought to a certified diamond in the rough? Mayock explained the process of how Hobbs put himself on the Raiders’ radar.

“I got a call from one of our cross-check scouts after the Illinois pro day,” Mayock explained, “and he said, ‘Mike, do me a favor and put your eyes on Nate Hobbs. He just ran a 4.45, he jumped 41 inches. He tested better than we thought he was going to test and I’m not sure if we got the right grade on him.’”

After that call, Mayock said he immediately watched tape on Hobbs and was so impressed that he went straight to the office of defensive backs coach Ron Milius and told him to watch Hobbs and report back with his analysis the same day. Milius studied the film and came back raving about Hobbs as well, leading Mayock to arrange a video call between the prospect and the coaching staff.

When Hobbs “knocked it out of the park” on the call, Mayock had his sleeper target. Weeks later, the Raiders snagged him with a fifth-round pick and he has been the talk of preseason. According to Pro Football Focus, Hobbs ranked as the top rookie defender in preseason among non-first rounders.

And that’s how the entire front office works together to find a starting cornerback.

“I think the cool part for me is seeing it come together,” Mayock said. “It started with a trigger from the cross-checker to tell me to get my eye on them. It went from there down to Milo, then it went to the Zoom call, and then it was the whole group getting together to say, ‘We got to get this guy.’”

Though Tuesday was officially cutdown day, Mayock cautioned not to put too much stock in how the 53-man roster looks right now. The situation is evolving and things could change in the coming days as front offices around the league manipulate practice squad spots, injured reserve lists and any number of available loopholes to build their teams.

For the Raiders, expect movement at the linebacker position. Second-year man Javin White avoided a season-ending injury last week, but he is still on the shelf for now, as is veteran Nicholas Morrow. Those injuries prompted Mayock and Gruden to trade for Carolina Panthers linebacker Denzel Perryman, but there is still work to be done.

With only five healthy linebackers on the roster, Mayock strongly hinted that more moves could be coming.

“We feel pretty good about bringing Denzel Perryman in and adding him to the group,” Mayock said, “but when you lose Nick Morrow, when you lose Javin White, are we still open for business potentially? Yeah, we are.”