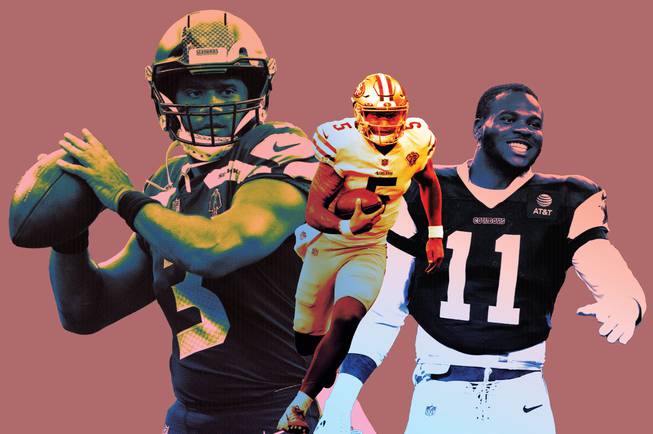 Long gone are the days when odds to win the Super Bowl and over/under team win totals were the only preseason NFL future wagers found at most sportsbooks.

Player-performance futures, both from award and statistical perspectives, have arguably become an even bigger talking point and have stimulated just as much betting action in recent years. They’re also a good way to risk a relatively small amount of money for a potentially big return while getting months of rooting interest for recreational gamblers.

Here are a handful of player future bets that could pay off for the upcoming season.

Wilson was the favorite to win the MVP through the first half of last season before tailing off and falling short. Still, it’s worth remembering the outcry during his hot streak, when every pundit was wondering aloud how the former Super Bowl champion had never as much as earned a single MVP vote.

The same support will emerge this year if Wilson is successful, and considering Seattle’s average record under him is 11-5, there’s no reason to believe he won’t be. There’s more hype around the NFC West rival 49ers and Rams, but the Seahawks are the surest thing, and that’s all because of Wilson.

Narrative matters to voters, a reason why it’s worth taking Prescott as a second mid-tier option next to Wilson. Prescott has put up MVP-worthy statistics when healthy, and despite an early scare in training camp, he now seems healthy and recovered from offseason ankle surgery.

Prescott has a strong chance to lead Dallas back to fielding one of the NFL’s most efficient offenses, and if he pulls it off, he’ll get strong MVP consideration.

Defensive Player of the Year

The traditional formula for this award is to find a team that exceeds expectations behind a great defense that makes up for a mediocre offense and pick that defensive unit’s best player.

Watt and Chubb both fit the bill perfectly. Neither Pittsburgh nor Denver is guaranteed to be any better than average this year, but they both have a chance, and if they do exceed expectations, it will be because of their defenses.

Watt narrowly finished second in the Defensive Player of the Year voting last year to the Rams’ Aaron Donald, making him a favorite worth backing this season.

Adams and White are on more offensively competent teams, but their prices are too high not to take a shot as two of the most highly-regarded defensive players in the NFL poised for their best seasons yet.

Offensive Rookie of the Year

But Lance has a big advantage over his competitors: He’s got by far the best team around him. The 49ers look like the only one of the bunch coming into the year as Super Bowl contenders if they stay healthy, and Lance’s big-play ability should only make them better.

At the least, Lance should be sitting as a co-favorite next to Lawrence at no higher than 4-to-1.

Defensive Rookie of the Year

Yes, Parsons is the favorite here, but he’s worth paying the short price for. Again, narrative matters in these media-voted awards, and Parsons is already being painted as the savior of a long-struggling Cowboys defense on Hard Knocks, the HBO training camp documentary series following Dallas this year.

The Cowboys are almost sure to improve on defense this season after bottoming out a year ago, and Parsons will get the bulk of the credit after being selected 12th overall in the NFL Draft.

Oweh, coincidentally Parsons’ teammate at Penn State, is a bet for the polar opposite reason—he’s getting no recognition, and therefore his odds are inflated. Oweh hasn’t provided any highlights in the preseason, but practice reports are positive, and he’s in a position where he can put up a high sack total with the strong Ravens’ defense.

Football Outsiders’ proven SackSeer projection system rated Oweh as the second-best edge-rushing prospect in this year’s class, but the odds currently have him much lower.

This is a pretty simple strategy: Take the top wide receiver of the NFL’s two best quarterbacks.

Hill has more competition for targets from Patrick Mahomes, but mainly only from tight end Travis Kelce this year, as the Chiefs have lost some depth on the outside. Kelce is coming off of a career year last season, and it might be Hill’s turn this time around.

Quarterbacks are unavoidable even in categories that aren’t traditionally set up for quarterbacks. That’s just the reality of the modern NFL.

Jackson becoming the first quarterback to win the NFL rushing title isn’t an outlandish possibility, and far more likely than these odds imply. The Ravens have run the ball more than any other team the past two seasons, and there’s no disputing that Jackson is their primary rusher. He has finished in the NFL’s top 10 in rushing yards each of the past two years.

The rookie Harris represents a more conventional choice. Pittsburgh has made no secret that it’s building its offense around the Alabama product, who should be more durable with less wear than other running backs around the league who have been through the rigors of multiple NFL seasons.

Mayock: Raiders ‘need to be a playoff team this year’