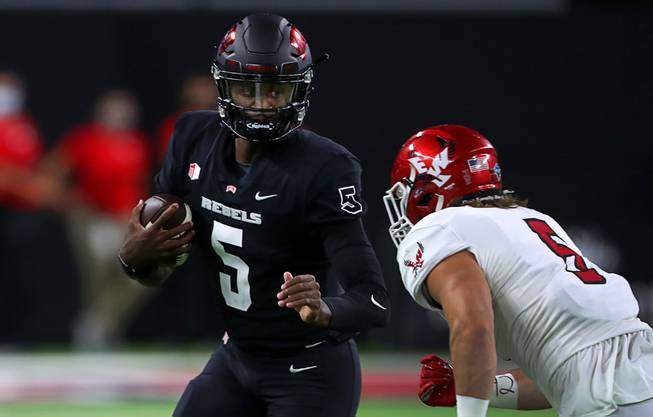 UNLV came up an inch short.

Doug Brumfield hit Zyell Griffin across the middle on a potential game-tying 2-point conversion in the second overtime, but Eastern Washington defenders converged to keep Griffin from breaking the plane. Eastern Washington players stormed the field, and the play survived a review to give the Eagles a 35-33 win.

The teams traded touchdowns in the first overtime period. UNLV got on the board first with a 13-yard scoring run by Charles Williams, and EWU answered with a 25-yard touchdown pass by Eric Barriere on the first play of their possession.

Eastern Washington got the ball first in the second OT, and again it only took one play to find the end zone as Barriere tossed another 25-yarder. Barriere threw again on the mandatory 2-point conversion attempt and a UNLV defender got a hand on the pass, but the ball deflected up and into the arms of an EWU receiver to put the Eagles up, 35-27.

Brumfield ran for a touchdown to get UNLV within two points, but his final pass just didn’t cross the goal line.

It’s a majorly disappointing start to the season for UNLV. After going 0-6 last year, losing to an FCS opponent was not the way head coach Marcus Arroyo wanted to begin his second season at the helm.

The scarlet and gray will head to Arizona State next Saturday.

After a wild fourth quarter that saw UNLV claw back from a double-digit deficit, we are heading to overtime tied, 20-20.

UNLV had a chance to take the lead late in the fourth quarter as they took possession with four minutes left and the score tied, 20-20. But after reaching midfield Doug Brumfield threw high on 3rd-and-6 and his pass was deflected and intercepted.

Eastern Washington then drove inside the 10-yard line with three seconds on the clock and lined up a 22-yard chip shot for kicker Seth Harrison. But Harrison missed wide (his third missed field goal of the game) and UNLV has new life.

UNLV will have possession first in OT, and they should have all the momentum.

UNLV storms back, tied with Eastern Washington in fourth quarter

In a stunning turnaround, UNLV has scored 14 unanswered points to tie this game, 20-20, midway through the fourth quarter.

It started with a Daniel Gutierrez 51-yard field goal to bring UNLV within 20-12, and Eastern Washington then fumbled the ensuing kickoff. UNLV recovered, and on the first play of the possession Charles Williams took a handoff and went 26 yards for a touchdown. Doug Brumfield hit Courtney Reese for the 2-point conversion and this is suddenly, inexplicably a brand new ballgame.

Now it’s up to the UNLV defense, which has performed admirably for most of the game, to get the ball back at least one more time in regulation.

The dangerous Eastern Washington offense is finally clicking, and after back to back touchdown drives the Eagles have taken a 20-6 lead going into the third quarter.

Eastern Washington’s last possession was a buzzsaw. The Eagles ran 10 plays, all at a hurry-up tempo, and covered 62 yards (capped off by a Dennis Merritt 6-yard touchdown run). After performing so admirably in the first half, UNLV’s defense is visibly tiring.

Doug Brumfield has entered the game at quarterback and provided some spark, however. He just hit Kyle Williams on a 58-yard bomb to close out the third quarter, so UNLV will have the ball inside the red zone to begin the final period.

Eastern Washington jumps ahead of UNLV, 10-6

It’s been a calamitous start to the second half for UNLV, and with 10:40 left in the third quarter Eastern Washington has pulled ahead, 10-6.

UNLV got the ball to open the half but turned in the worst offensive drive of the night so far. They took a delay of game penalty before the first snap, then got called for a false start. After Charles Williams was stuffed behind the line on 1st-and-20, another false start pushed them even deeper. Two runs later, UNLV punted.

Eastern Washington has had trouble getting its passing game going, but on third down quarterback Eric Barriere found Efton Chism over the middle. Chism made the first defender miss, then spun away from a pair of Rebels to get into the open field. He picked up a block along the right sideline and broke free for a 31-yard touchdown.

The UNLV offense is going to have to generate some type of scoring drive in order to win this game, and so far quarterback Justin Rogers has not shown he is capable of leading that kind of effort. The scarlet and gray are in trouble.

UNLV leads Eastern Washington at half, 6-3

It was ugly, but UNLV has somehow managed to carve out a 6-3 lead heading into halftime.

The game’s first truly big play came with two minutes left in the half, when Eastern Washington quarterback Eric Barriere overthrew an in-breaking route and the ball floated directly into the waiting arms of UNLV defensive back Cameron Oliver for an interception. Starting at the Eastern Washington 35, Justin Rogers was able to guide UNLV into the red zone and set up Daniel Gutierrez for the go-ahead kick at the buzzer.

It has been an ugly showing for the UNLV offense so far, as evidenced on the final drive of the half. On second down, Rogers had an open receiver running across the middle; an accurate throw would have resulted in a first down and a clock stoppage inside the 5-yard line. Instead, Rogers threw low and forced his man to make a sliding catch short of the marker. The clock ticked under 10 seconds and Marcus Arroyo had to use his final timeout to set up the field goal attempt.

The good news is that UNLV’s defense has been outstanding. Aside from Oliver’s opportunistic pick, Jacoby Windmon has been a madman from his new inside linebacker position.

UNLV will receive the ball to start the second half. It hasn’t happened yet, but if they can somehow go the length of the field and get into the end zone, they’d have to feel good about their defense holding a double-digit lead after what we saw in the first 30 minutes.

UNLV may be on the verge of making a change at quarterback after posting a zero points on three drives in the first quarter. With 14:16 left in the second quarter, we’re still scoreless.

Justin Rogers started at QB but generated little forward momentum, completing 3-of-5 passes for 14 yards while throwing one pass that was nearly intercepted.

How long will Marcus Arroyo wait before trying to inject some life into the offense? We’ll see if Rogers comes out to lead UNLV’s next drive.

Justin Rogers gets start at QB for UNLV

Justin Rogers got the start at quarterback for UNLV, but the story midway through a scoreless first quarter has been the play of the scarlet and gray defense.

The remade front looked good on Eastern Washington’s first drive, especially relocated linebacker Jacoby Windmon. On second down, Windmon chased Eagles quarterback Eric Barriere out of bounds, and on third down Windmon blitzed and spun Barriere in circles before forcing a short completion well of the first down.

After forcing Eastern Washington to punt, Rogers and the offense didn’t make much of their first possession. A couple handoffs to Charles Williams netted a first down, but Rogers took a sack and then threw short of the marker on third down.

UNLV players and coaches have spent almost nine months dwelling on their 2020 campaign, when the scarlet and gray went 0-6 and inspired little excitement about the future of the program — but they swear things will be different this year.

The team got a full, uninterrupted training camp, they’re another class deeper thanks to some good recruiting work, and fans will be allowed inside Allegiant Stadium. As head coach Marcus Arroyo has preached all offseason, the goal is to look unfamiliar compared to the 2020 team.

The first test will be a tough one, as Eastern Washington presents some difficult matchups on both sides of the ball.

What to watch for when UNLV opens its season on Thursday night (7 p.m., Stadium):

Marcus Arroyo has been coy about his No. 1 quarterback since the end of last season, but we’ll find out shortly after kickoff which player he trusts the most to lead his offense. But whether Justin Rogers or Doug Brumfield gets the start, it’s likely both QBs will play at different points throughout the game as UNLV tries the platoon approach.

The question is, will the offense look markedly different depending on which passer is at the controls? And ultimately, will one of them perform well enough to stay on the field in the fourth quarter when the game is on the line? After an entire offseason of questions and speculation, we’re about to get an (albeit temporary) answer at the sport’s most important position.

First and foremost among the many issues facing UNLV last season was rush defense. The scarlet and gray allowed 6.3 yards per carry, an ungodly number that ranked them second-worst in all of college football. It’s impossible to win that way.

Arroyo did something about it, remaking much of the defensive front in the offseason. Incoming transfer Connor Murphy takes over at one defensive end spot, while Kylan Wilborn starts at outside linebacker and former edge rusher Jacoby Windmon moves to inside linebacker. It’s a different look — bigger, stronger and faster, and theoretically more equipped to hold up against the run.

There’s no way of getting around it, this is exactly the type of game UNLV could be counted on to lose in the past. A coach in his second year promising a new culture, a wave of talented recruits, a home gimme against an FCS opponent … those are the kinds of things that make scarlet and gray fans sweat.

If Arroyo can guide this squad to a win, it will do a few things. First, it will get the winless monkey off his back after going 0-6 last year. Second, it will shake out some of the bad mojo left over from the disastrous loss to Howard in 2017. Third, it will provide some type of validation for the way Arroyo is doing things at UNLV.

For a season opener against a non-DI team, the stakes are as high as they can get. A loss would be disastrous for UNLV, but a win would be celebrated.