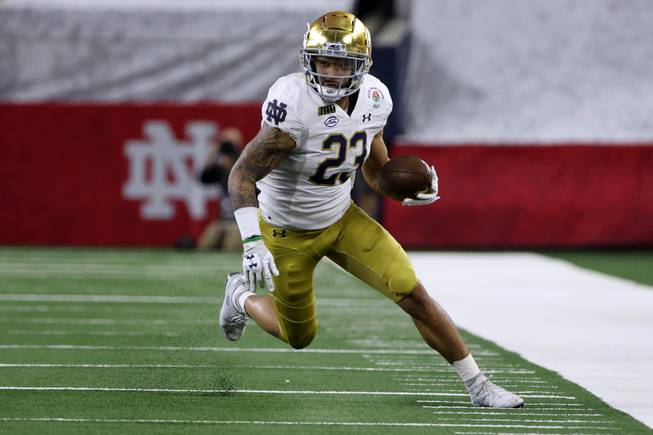 That’s going to be the advice you get from a lot of bettors for the first week of the college football season. Heck, I’m sure it’s advice I’ve both dispensed and followed in past years.

Not this year. I’m going to instead trust the work I’ve put in getting ready for the season over the last couple months and attack lines that remain off of my numbers.

After three plays to start the week (a fourth was canceled because of a date change and I’ve downgraded it to a lean here), I’ve got seven more on Saturday. Ten plays in this column is a lot for one week based on past norms, but it’s a new year.

Find picks for all of Saturday’s game, though presented in a new format, below. Lines are the best currently available in Las Vegas on the chosen side. Picks are labeled with three separate confidence categories — plays, leans and guesses.

Penn State +5 at Wisconsin, over/under: 50. There’s a compelling case to be made that both of these teams are buy-ons this year. Wisconsin’s offense shouldn’t be as maddeningly inconsistent with a high rate of returners, and much of Penn State’s terrible 4-5 campaign in 2020 was a result of bad luck and not poor underlying process. The Badgers are probably a little safer given some uncertainty on the Nittany Lions’ defense, but this line reflects that. Guess: Wisconsin -5.

Alabama -19.5 at Miami, over/under: 61.5. This is an excessively high line for what’s undoubtedly a matchup between two of the top 10 most talented teams in the nation. That being said, it’s hard to use a numerical argument for betting against the Crimson Tide when they shatter numerical expectations almost every single season. The coaching mismatch is also alarming as Manny Diaz hasn’t proven to be an above-average decision maker, let alone one who can match wits with Nick Saban. Guess: Miami +19.5.

Indiana +3.5 at Iowa, over/under: 46. The betting market almost always trends towards efficiency, but I can’t get past thinking the opening price of Iowa -5.5 was closer to the true price. I make the spread Iowa -6 and given some of its matchup advantages — namely the top-ranked defense in the country by SP+’s preseason projection against Indiana’s lack of explosive offense — the Hawkeyes may win easier than that. Lean: Iowa -3.5.

Georgia +3 vs. Clemson in Charlotte, over/under: 51. There’s been a lot of talk about Georgia’s rash of injuries and absences the last couple weeks, and yet this line keeps sliding in its direction. That’s a testament to how much talent coach Kirby Smart has assembled. The unavailability of Darnell Washington and Arik Gilbert are a hit to the Bulldogs, but they should be able to manage. They have more than enough to endure a couple secondary injuries. It goes against the norm of the last several years, but for this season, Georgia has a better roster than Clemson. Lean: Georgia +3.

LSU -3 at UCLA, over/under: 65.5. Georgia would have been a play at anything above 3 — and so would UCLA. Luckily, I already locked in UCLA +4.5 over the summer but I’ll pick everything against current prices here. The Bruins still have a great chance to win outright, especially given their strength up front that could equalize or even best the Tigers in the trenches. UCLA didn’t even have to show much to beat Hawaii 44-10 last week, as it surely has some twists stashed away for LSU. Lean: UCLA +3.

Notre Dame -7 at Florida State, over/under: 56. Everyone is calling for a Notre Dame decline, and coming from a College Football Playoff appearance a year ago, it makes sense. But decline this much? Unlikely. The Seminoles have been a mediocre-at-best Power Five conference team over the last three seasons. They’re not recruiting at the same level as they once were and will be at disadvantages to the Irish all over the field. Play: Notre Dame -7.

Louisville +10.5 vs. Ole Miss in Atlanta, over/under: 76. Here’s the second big-time battle of two bet-on teams of the week. Ole Miss’ offense should be as electric as advertised behind quarterback Matt Corral, but Louisville has firepower of its own with quarterback Malik Cunningham. The Cardinals also have a defensive edge, one that should help keep this close throughout. Play: Louisville +10.5.

Marshall -2 at Navy, over/under: 47. The Thundering Herd are breaking in new coach Charles Huff, but there’s no reason to believe they’ll regress significantly under the former Alabama and Penn State assistant. And they’d need to regress significantly in order for Navy to have a chance considering the Midshipmen were at -1.5 net yards per play last year as opposed to the Herd’s +1.1 net yard per play. Play: Marshall -2.

West Virginia -3 at Maryland, over/under: 57.5. West Virginia broke out last year behind what was quietly one of the nation’s stingiest defenses, but almost everyone from that defense has now departed. Maryland is stacked with explosive players on offense, led by quarterback Taulia Tagovailoa, that should take advantage of a green opposing unit. Play: Maryland +3.

UNR +3 at California, over/under: 52.5. Wolf Pack quarterback Carson Strong is deserving of all the praise he’s been given, but he doesn’t have enough around him. The Bears are a more complete team, one poised for a bounce-back year behind a defensive front that will harass Strong. Play: Cal -3.

UTSA +5.5 at Illinois, over/under: 49. The only thing that really separated Illinois from Nebraska in its 30-22 season-opening win was a 41-yard fumble return touchdown right before halftime. The Cornhuskers actually had a positive postgame win expectancy. Now the Illini are down to a backup quarterback in Arthur Sitkowski against a UTSA team on the rise after back-to-back big-time recruiting classes. Play: UTSA +5.5.