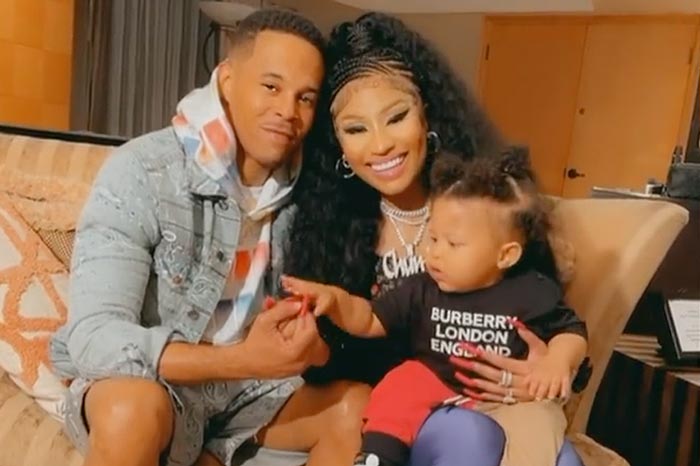 The proud mom is revealing brand new footage of her baby boy. Taking to Instagram on Thursday, the Queen shared an adorable video of “Papa Bear” sitting in his mother’s lap wearing a Burberry T-shirt. As his dad Kenneth Petty looks on, Nicki raises her son’s hand and tells him to say hi and he does, much to his parents’ surprise.

In other video clips, Papa Bear wears a bib while rolling around in his walker and listens as his mom compliments his cuteness.

Nicki, who has yet to reveal her son’s actual name, has been enjoying motherhood. “I’ve also been completely overwhelmed with joy & fulfillment in the world of Papa Bear,” she told fans in an open letter earlier this year. “Each day creates a new & fascinating, magical memory that I hide far away into a little cute compartment of my heart; vowing never to forget any of it.”

Papa Bear will celebrate his 1st birthday at the end of September. After keeping his face off social media, Nicki shared the first photos of her son in January.

Nicki said that Papa Bear was not a fan of rap when she was pregnant, but he did like her song “Seeing Green” with Drake and Lil Wayne. “He hated rap music when he was in my tummy. He’d kick rlly hard,” she said. “But he was bopping a lil bit to #SeeingGreen b4 I released it.”

Bobby Shmurda Returns with ‘No Time for Sleep (Freestyle)’

Ja Rule and Fat Joe to Face Off in Verzuz