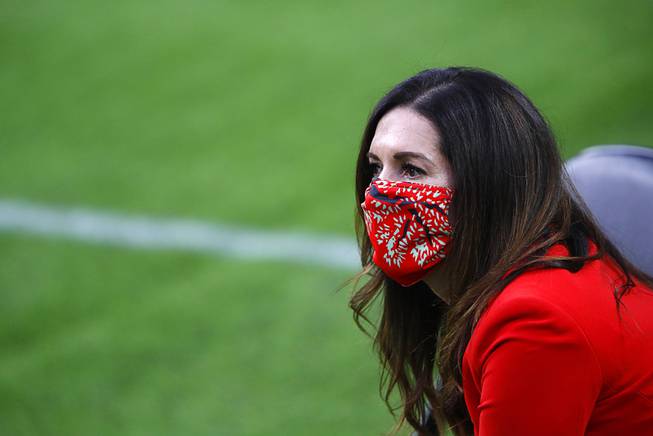 UNLV Athletic Director Desiree Reed-Francois watches the Rebels during the first half of their game against the Wyoming Cowboys at Allegiant Stadium Friday, Nov. 27, 2020.

The UNLV athletic department is losing another top official to the University of Missouri.

Greg Hulen, who had only been in Las Vegas for two months as UNLV’s senior associate athletics director, is following Desiree Reed-Francois to Mizzou as its new chief revenue officer, the St. Louis Dispatch is reporting.

Reed-Francois was the UNLV athletic director from 2017 through last month before leaving for Missouri of the SEC.

“Greg Hulen has excelled as a fundraiser and revenue generation leader at the highest levels,” Reed-Francois told the Dispatch.

Hulen, who came June 16 to UNLV from Florida State, was supposed to be in charge of resource development and philanthropic efforts. He was tasked with managing the Rebel Athletic Fund ­— the fundraising arm of the department — as well as premium seating at Allegiant Stadium and the Thomas & Mack Center.

In an interview last month with the Sun, Hulen raved about how the department was up-and-coming, saying you’d be hard-pressed to find a better game-day venue nationally than Allegiant Stadium. That’s part of the reason why he left Florida State for UNLV.

Turns out, his 10-week tenure ended here before the Rebels on Thursday could host Eastern Washington in the season opener.

Live coverage: Schedule highlighted by intriguing games in class 5A