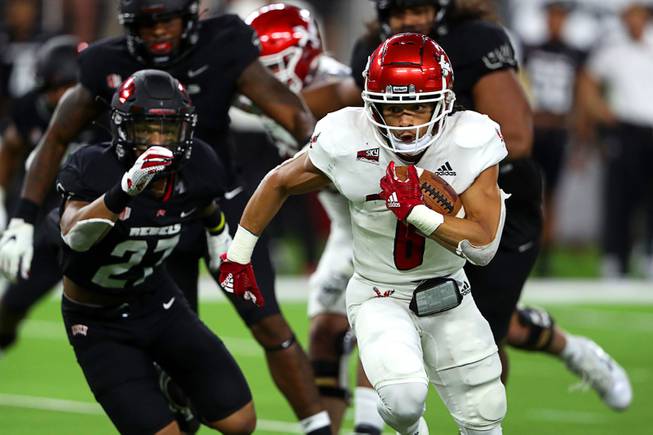 Eastern Washington running back Dennis Merritt carries the ball during the first half against UNLV at Allegiant Stadium Thursday, Sept. 2, 2021. UNLV rallied from a 14-point second-half deficit in the season opener but lost in overtime.

Charles Williams has lost a lot of games during his time at UNLV.

The sixth-year running back suffered through 37 losses between 2016-2020, to be precise. He wasn’t in uniform for all of them, as injuries have kept him sidelined for a couple significant stretches, but Williams has seen just about every manner of defeat: Games lost due to poor defense, turnovers, special-teams miscues, coaching blunders and everything in between.

And yet, he still probably wasn’t prepared for No. 38.

UNLV rallied from a 14-point second-half deficit against Eastern Washington in Thursday’s season opener and survived a last-second missed field goal by EWU kicker Seth Harrison to force overtime, only to fall when a 2-point conversion attempt in the second OT period came up inches short.

Eastern Washington players swarmed onto the field after securing a 35-33 win at Allegiant Stadium. Williams and his teammates slumped back to the locker room, stunned.

After the game, Williams was asked how he and his teammates will get through yet another seemingly crushing defeat.

His answer reflected all the accumulated losses.

“Honestly, you’ve just got to,” Williams said before trailing off. He then sighed, took a moment to compose himself, and continued. “It’s really difficult. Right now it’s difficult, yes. But as a man you’ve got to understand and learn from your mistakes and get better from it. We’re not going to dwell on this too long.”

Williams did everything in his power to drag UNLV across the finish line. He carried 27 times for 172 yards and two touchdowns, including a 13-yard TD run in the first overtime period to put UNLV ahead.

Neither team moved the ball much in the first half, as UNLV starting quarterback Justin Rogers completed 7-of-10 passes for just 23 yards. UNLV still managed to stake out a 6-3 lead at the break, but the Rogers-led offense went three-and-out on each of its first two possessions to start the second half. Eastern Washington scored a touchdown on its first drive and then kicked a field goal to extend its lead to 13-6.

UNLV head coach Marcus Arroyo made a change at quarterback at that point and inserted sophomore Doug Brumfield, who lit an immediate spark with a 52-yard bomb to Kyle Williams. The scarlet and gray didn’t finish off that drive, however, and when Dennis Merrit scored on a 2-yard run late in the third quarter, Eastern Washington took a commanding 20-6 lead.

Brumfield led a pair of field-goal drives to get UNLV within 20-12, and Eastern Washington gave the scarlet and gray serious life by fumbling a kickoff with eight minutes remaining. Williams scored on the next play from 16 yards out, and Courtney Reese caught the 2-point conversion pass to tie the game.

Eastern Washington did UNLV another favor in the final minutes by driving inside the 10-yard line and then taking their foot off the gas pedal, content to burn clock and set up a potential game-winning 22-yard field goal. The kick missed at the buzzer, however, setting up a back-and-forth overtime period.

Brumfield scored on a spectacular 19-yard run to bring UNLV within 35-33. He lined up in shotgun formation on the 2-point attempt and hit Zyell Griffin across the middle, but two Eastern Washington defenders sandwiched him and kept the ball from breaking the plane.

UNLV is now 0-1 on the season and has a brutal nonconference slate ahead, which only makes Thursday’s loss hurt even more.

Williams has suffered so much at UNLV, Thursday wasn’t even the first time he’s been on the wrong end of a season-opening defeat at the hands of an FCS program. He was a sophomore in 2017 when the scarlet and gray were embarrassed by Howard and lost outright as 45-point favorites, so if anyone could provide leadership at a time when UNLV is seriously going to need it, it’s Williams.

That 2017 team ended up going 5-7, ultimately coming up one game short of a bowl berth. Williams wants this team to refocus quickly and not let the season spiral out of control.

Brumfield finished 5-of-12 for 117 yards, though his receivers did him no favors by dropping at least three passes.

UNLV will have eight days to recover before traveling to face Arizona State on Sept. 11.