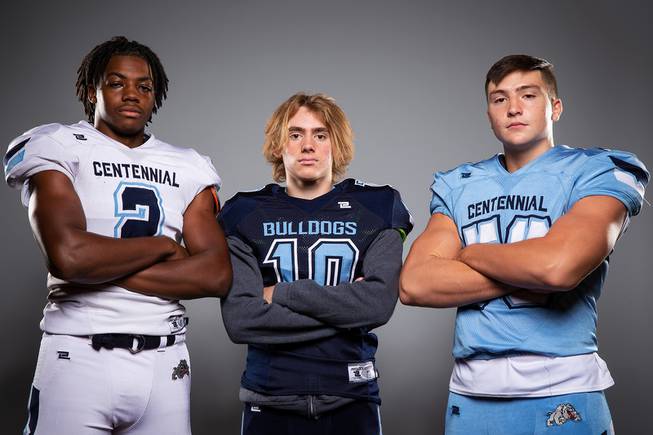 Kicker saves the day in Centennial’s win over Legacy

Members of the Centennial High School football team are pictured during the Las Vegas Sun’s high school football media day at the Red Rock Resort on August 3rd, 2021. They include, from left, Nicauri Shelton, Ben Hungerford and Thomas Gili.

On Friday night, Bayne helped give the Bulldogs their first win since advancing to the title game some 90 months ago, drilling three field goals in a 9-8 victory against Legacy.

Bayne’s field goal of 30 yards gave Centennial the lead with about seven minutes to play, and Damari Wiggins’ interception sealed the victory. Bayne also made kicks of 42 and 23 yards in a 3-for-4 night.

“Defense played lights out and we didn’t turn the ball over,” coach Dustin Forshee said.

Last week, Centennial had six turnovers in losing to Durango. Tonight, the Bulldogs finally got back in the win column — of course, they couldn’t win in 2020 because the season was canceled because of the pandemic.

“The defense was phenomenal. One big play after the next,” Forshee said.