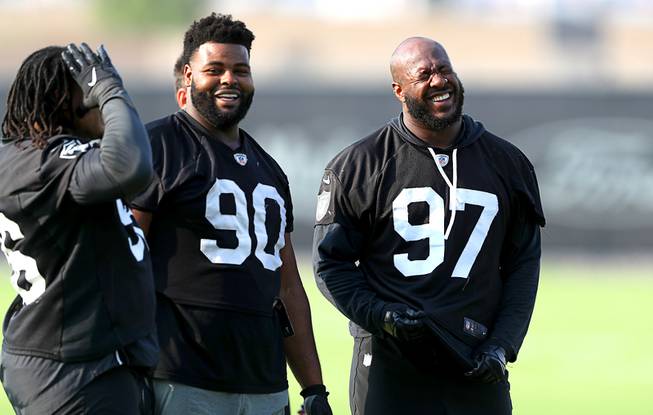 Optimism abounds as it pertains to the Raiders’ defense.

With new, proven impact players at every level — including edge rusher Yannick Ngakoue, linebacker K.J. Wright and cornerback Casey Hayward — it’s easy to envision this being the year that Las Vegas finally field a competent stop unit. The Raiders may have preferred an easier first test, though.

It’s trial by fire in Week 1 when the Baltimore Ravens come to town for a 5:25 p.m. Monday Night Football kickoff on Sept. 13 at Allegiant Stadium.

“I played for Bill Parcells and he always said, ‘Potential means you ain’t done a damn thing yet,’” Raiders general manager Mike Mayock said last week. “And I’m a big believer in that, and it doesn’t mean that these guys that are with us haven’t done it individually in the league. We just haven’t done it collectively as a Raiders defense yet. Baltimore presents a challenge that’s unique in this league and we better be ready to play, that’s all I know.”

The Ravens have fielded one of the best offenses in the league over the last two years, and they’ve done it in a way that could specifically cause problems for the Raiders — with the run. Behind the running ability of quarterback Lamar Jackson, they’ve led the league in back-to-back years with 5.6 yards per rushing attempt.

It would be a shock if Las Vegas doesn’t take at least some positive strides in defending the pass this year considering all the resources and talent it’s injected into the pass rush and secondary. Coach Jon Gruden said the defensive effort will be powered by leaders Ngakoue and Maxx Crosby — two players who have both made names for themselves in the league by pressuring quarterbacks.

Their ability to clog rushing lanes and win battles at the line of scrimmage is more in question, just as it appears to be for the whole team.

“I think that’s big, and we’ve been harping on this: Especially our first game, you’ve got to be able to defend the run too so we can’t just have rushers,” defensive coordinator Gus Bradley said. “I’m really pleased with the defensive line. (Defensive line) Coach (Rod) Marinelli, you know his mindset, they’re going to be a group that’s tough and finishes. He’s building that mindset, ‘Hey we’re not just pass rushers now, we’re also guys that can defend the run.’”

They didn’t have enough guys who could defend the run well enough last year. The NFL is more of a passing league every year, so problems in the Raiders’ secondary overshadowed it, but they were even worse up front.

Las Vegas allowed 4.2 yards per rushing attempt and ranked 20th in the NFL but those numbers make their performance sound better than it was in reality. The Raiders had the benefit of not having the NFL’s top six rushing teams on the schedule and rated 28th in rush defense DVOA, an all-encompassing metric by Football Outsiders that incorporates opponent adjustments.

It was a problem all year, with lowlights at all different points of the schedule.

The Raiders’ first loss came when the Patriots gashed them for 250 yards on 38 carries on the ground. They nearly succumbed to the then-winless Jets when they allowed a career-high 104 yards to backup running back Ty Johnson. And then, in a virtual must-win against the Colts, they got blown out and never had an opportunity to come back because they couldn’t stop Jonathan Taylor from racking up 150 yards on 20 carries.

That was all under defensive coordinator Paul Guenther’s watch, of course, and there’s hope that Bradley’s less complex scheme can shore up a lot of the issues.

The personnel moves over the last week could be interpreted expressly as the Raiders doing their best to solidify the run defense. They waived Tanner Muse, a third-round pick linebacker out of Clemson, on Monday morning to make space for Wright, who joins Denzel Perryman as new arrivals at the position.

Both have played under Bradley before and perhaps could lead a new wave of players that proves tougher against opposing run games.

“As far as the run, that’s just everybody doing their job,” Perryman said. “D-line gotta make sure they keep us in it and linebackers gotta make sure we get the double-team off them. We’ve just got to work hand-in-hand with that.”

But Bradley’s recent history as coordinator doesn’t inspire a lot of confidence either. In the last four seasons with the Los Angeles Chargers, his defenses only ranked above average against the run by DVOA once.

The Chargers’ average run-defense ranking was 22nd in the league under Bradley. This is a new set of players, though, and Bradley is confident he has the right mix.

Stopping the run starts up front and Bradley prefers to have big defensive tackles manning the middle, which he’s got in newcomers Quinton Jefferson and Darius Philon next to returning stalwart Johnathan Hankins. He’s also got more interchangeable pieces at his disposal as he has said Clelin Ferrell and Solomon Thomas could rotate both inside and outside.

“We’re trying to create enough flexibility that, in those games where we have to get bigger in certain situations, we can,” Bradley said. “But (run defense) is really a mindset. Good technique, doing it over and over again.”