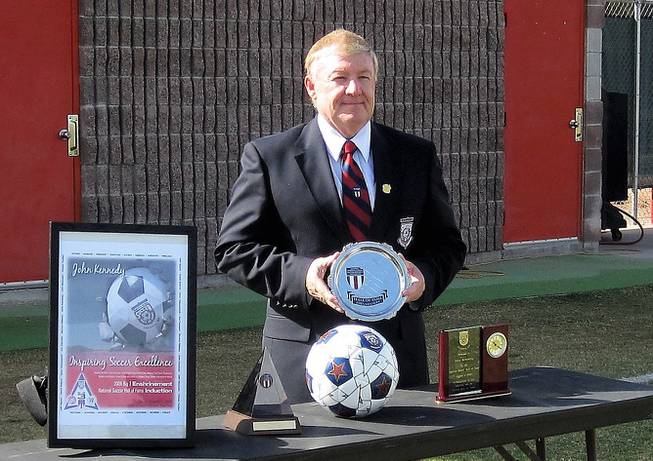 John Kennedy, a legend in the Las Vegas soccer scene for more than 40 years, is ending his days as a referee. Kennedy, an inductee in the National Soccer Hall of Fame, never turned down an assignment from the Southern Nevada Official Association and worked an association-best 17 state championship games.

If you grew up playing soccer in Las Vegas, there’s a strong chance John Kennedy was the referee at many of your most meaningful games — regardless of the level. It certainly was that way for me.

Kennedy is retiring after four decades of working youth, high school, college and professional matches. He has worked both indoor and outdoor games, and he has traveled across the country at a moment’s notice when called to referee. Later in his career, he called the games of players whose mothers and fathers would comment afterward that he also was their referee back in the day.

For many of us in the soccer community, Kennedy is Las Vegas soccer. He’s our ambassador, the man who helped take the sport to new heights, all with the class and dignity of someone determined to advance the sport in his adopted home of Las Vegas. He last called a high game in 2019 prior to the pandemic. His last official game was assisting at a recreation game at the Big League Dreams facility.

When Kennedy, 71, a transplant from Scotland, announced his retirement on Facebook, nearly 300 people commented to wish him well. A sampling:

• “You raised me on the soccer field. I bet you were at 75% of the games I played in my entire life.”

• “You’re an absolute legend! Yes, a great member in the world of soccer but a greater friend and human being.”

• “Thank you for the positive impact you have had on soccer in Vegas for so many years. You’re the best! Love you John!”

Kennedy was overwhelmed with emotion when reading the comments, many of which he proudly shared with his wife of nearly 50 years, Marj.

“There is a lot of kids on there that I haven’t seen in years,” Kennedy said. “Being a referee is a difficult job, but to be able to maintain the respect of the players and coaches you reffed over the years, that is the key to everything. That is what makes me proud.”

Of all of the matches he refereed over the years, none were longer than the eight-overtime NCAA championship game between UCLA and American University in 1985. UCLA won 1-0 after 166 minutes, 5 seconds. He jokingly says he’s fortunate that he was only a linesman that day.

He did get the assignment as the middle official the following year for the collegiate title game, when Duke beat Akron for the championship.

While Kennedy made a splash nationally, including in 2009 being inducted into the National Soccer Hall of Fame, that’s not why he is so popular here. Kennedy never turned down an assignment from the Southern Nevada Official Association and worked an association-best 17 state championship games.

It’s odd for a referee who is called to do higher level games to continue working on the local pitch, but Kennedy’s love for the game kept him coming back. If there was soccer to be played, Kennedy wanted to be around the game he loved.

Vince Kristosik, president of the Southern Nevada Officials Association, said Kennedy was one of the best the association has had — regardless of sport. “He’s an official we aren’t going to be able to replace,” he said. “Everyone, the players, coaches and parents, knew John and trusted John. He’s a legend in this community.”

Every official, regardless of the sport, will miss a call here and there. And, like clockwork, every official will also be faced with an argumentative coach or player pleading their case to have the call changed.

Kennedy always listened — maybe even too much, estimating he only issued about 20 red cards through the years. That ability to be flexible is what helped Kennedy gain respect.

“There’s nothing more important than being calm in a stressful situation, and he had that quality,” said Marc Ratner, the longtime commissioner of officials who worked all 40 years with Kennedy. “His accent gave him more credibility in a lot of ways because people thought he knew what he was talking about.”

Kennedy also briefly coached, serving as an assistant with the indoor Las Vegas Dustdevils for their championship season in 1994. He stays in contact with many of those players, often meeting at Crown & Anchor British Pub for a beer and to watch matches.

“I still love the game as much as I did when I was a 4-year-old kicking the ball for the first time,” Kennedy said. “And because I love the game, I also respect it. It’s time for me to only watch.”

Kennedy was working a club tournament in 1983 when he was spotted by then UNLV coach Barry Barto, who was the chairman for the NCAA championship committee for men’s soccer. Barto was impressed with Kennedy’s style and added his name to the mix to work college games.

At the time, when the Las Vegas population was about 500,000, and with the area not known as a soccer hotbed, having someone reach the national stage was unheard of. Then, again, Kennedy was surely in a class of his own.

“He tolerated the players, tolerated the coaches, had a good demeanor and didn’t balk at any questions,” Barto said. “He understood the game, and that makes it a lot easier. … Having a good referee makes all the difference in the world, and that’s why John was called to do a lot of big games across the country.”

And that’s why the local pitch will be noticeably missing one of its icons this fall.

“I am going to miss the interactions with everyone,” he said. “Those were some special times.”

Raiders receivers to be tested by elite Baltimore secondary

College football by the odds: Vegas preview and picks of every Week 2 game