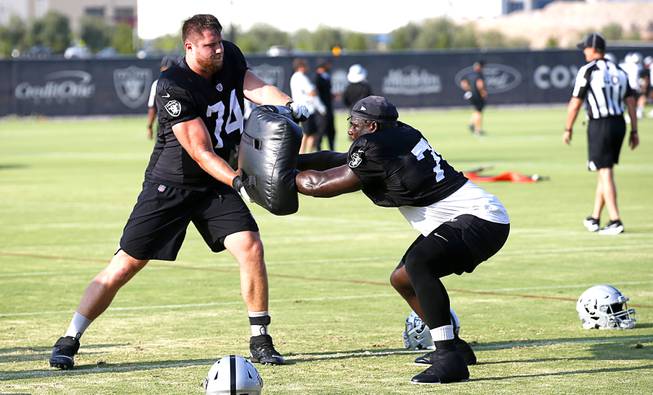 For the past two seasons, everyone associated with the Las Vegas Raiders jumped at any chance to declare that the team had “the best offensive line in the league.” They won’t be claiming that this year, at least not to start the season.

That’s not to say the organization doesn’t trust the five big guys up front; it’s just that the unit is no longer a veteran-laden group and now needs to prove itself. With a tightening NFL salary cap as a result of last season being contested without fans, the Raiders needed to cut roster costs and decided offensive line was the best place to do it.

They traded away three veteran starters—right tackle Trent Brown, right guard Gabe Jackson and center Rodney Hudson—and committed to more of a youth movement. The Raiders have fielded one of the NFL’s best offenses the past two seasons, and the onus is on the new line to coalesce quickly to maintain that standing.

Here’s how it looks, position-by-position:

Miller has improved every season since the Raiders took him in the first round of the 2018 NFL Draft out of UCLA—to the point where the team believes he has All-Pro potential. Las Vegas signed Miller to a three-year, $54 million contract extension this offseason in a show of confidence that he can become an undisputed franchise cornerstone.

The emotional leader of the line, Incognito is heading into the 16th season of an NFL career that dates back to before some of his youngest teammates were in elementary school. He’s technically one of two returning starters on the line (along with Miller), but he played in only the first two games last year before injuring his Achilles and missing the rest of the season.

James has the tallest task ahead of him—replacing a reliable Pro Bowler in Hudson. Las Vegas only moved on from Hudson because it was so confident in the progress James had shown in practice for the past two years since going undrafted out of UCLA, where he was a teammate and close friend of Miller’s.

With injuries compounding up front last season, Good had to shift between every offensive line position other than center to become the ultimate utility man—and someone Derek Carr called the team’s “most valuable player.” Good opted to stay with Las Vegas rather than move on in free agency, with the promise of a shot at a full-time starting role for the first time in his seven-year career.

Las Vegas was so enamored of the rookie from Alabama that it took him with the 17th overall pick in April’s NFL Draft—a round higher than most had graded him. Leatherwood did nothing to make the Raiders regret the decision in training camp, picking up the offense at warp speed and flashing big-time athleticism.