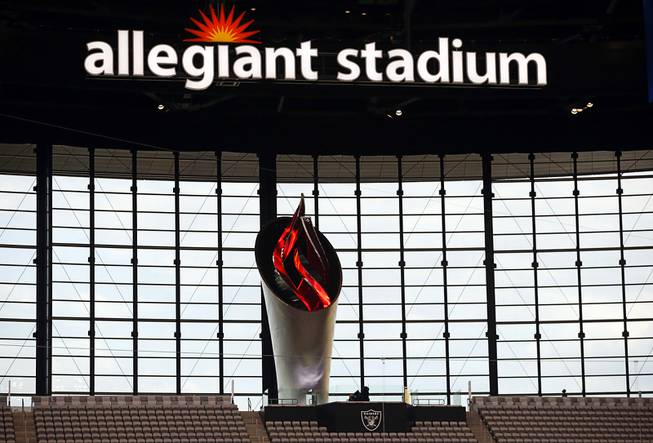 The Al Davis Memorial Torch is lit during the Raiders’ first home game against the New Orleans Saints at Allegiant Stadium Monday, Sept. 21, 2020.

Sandoval, now the president of UNR, was instrumental in bringing the Raiders to the Silver State, the team said. He signed bills into law in 2016 to clear the team’s path for relocation from Oakland, California.

In a tradition that began in 2011, a selected person lights the torch before each home game. Those chosen for the honor include former Raiders, celebrities and fans.

The team also announced Gladys Knight will sing the national anthem on Monday.

The singer-songwriter, entrepreneur and humanitarian will be seen by over 60,000 fans expected to attend the game.

“The Raiders are like family to me, and I’ve been a Raiders fan for decades,” said Knight, who sang the national anthem at Super Bowl 53 and is a seven-time Grammy winner. “To be able to honor our country, the Raiders team and my home of Las Vegas by singing the anthem, it is just so special.”

As Knight hits the final notes of the Star-Spangled Banner, F-35 fighter jets from Nellis Air Force Base will fly over the stadium and the Las Vegas Strip, the team said.