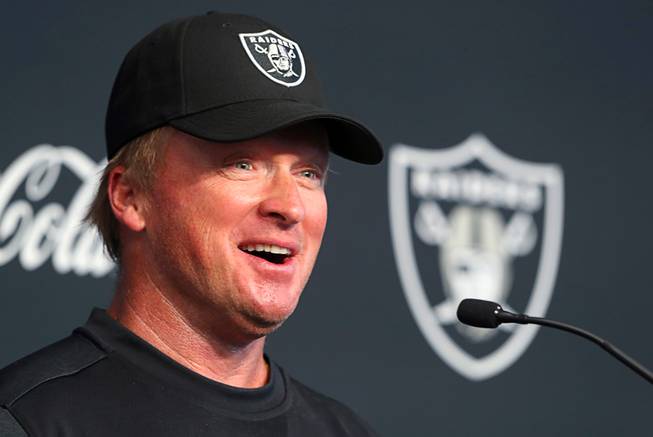 While pivotal for Jon Gruden, it’s not a make-or-break season

Las Vegas’ fourth-year coach would be one of the first people to arrive at the Intermountain Healthcare Performance Center in Henderson early in the morning, giving him ample time to prepare for his team’s 7:30 a.m. practices. The practice fields are where Gruden’s energy really came across. He’d bounce between the huddle and the sidelines in a black Raiders’ athletic shirt and black Raiders’ hat, yelling and instructing when necessary but just as often smiling and appreciating the effort of his players despite the desert heat.

Then, on days when he held a news conference afterwards, he’d always make a joke and share a laugh anytime a player came to the media room podium directly before or after him.

“He’s the most consistent person I’ve ever seen as far as his personality and what he brings to the table every single day,” wide receiver Zay Jones said. “Whether it’s installing the plays, whether it’s being around the building, he has an infectious personality and loves the game of football, every facet of it.”

Gruden sure wasn’t publicly acting like the on-edge control freak who’s entering the season at risk of losing his job that some national speculation may have led fans to believe. The Raiders’ 58-year-old coach is aware the first three years in his second tenure with the team, which have resulted in a 19-29 overall record, haven’t been good enough.

He reluctantly gave last year’s 8-8 campaign a “C” grade when asked in his season-opening news conference and acknowledged expectations are amplified this season. But, for the most part, questions about the big-picture, past- or forward-looking topics are likely to get a meme-worthy scowl out of Gruden.

He’s more concerned with his process, one that’s already delivered slow-but-steady progress and should probably result in a playoff berth this season if it continues to move at the same pace. As far as the consequences if things don’t go according to plan, that’s something Gruden refuses to speculate on.

“Pressure, man, that’s on everybody,” Gruden said. “You’ve got pressure on you if you want to talk about the pressure you’re going through. But I try to apply pressure, not feel it. We’re going to always do the best we can. I’m really proud of the effort we’re putting forth and I feel good about myself at the end of the day because of it.”

Not everyone has such positive feelings toward Gruden’s recent job performance, but that type of scrutiny was bound to come after Gruden signed a 10-year, $100 million contract with the franchise going into the 2018-2019 season.

That mammoth deal also guaranteed something else, too — patience. Raiders owner Mark Davis didn’t dole out such a large contract without the intention of giving Gruden at least half of the term to turn around a long-suffering franchise that’s now gone 19 straight years without a playoff win.

The road to relevance may be stretching longer than fans wanted under Gruden, but it’s hard to argue he’s not on the right route. The Raiders are in a better place than they were when he took over following a 6-10 season in 2017.

They’ve improved their record and point differential in each of the last two seasons and gotten off to a pair of hot starts — 6-4 in 2019 and 6-3 in 2020 — that showed a potential they ultimately couldn’t sustain. If this year’s team isn’t Gruden’s best team — but it’s certainly looked like his best team in training camp — then it’s at least the one made most in his image after four offseasons of input if not ultimate authority.

“We’ve got a great group of guys,” Gruden said. “The energy level is extreme, and we’ve got good veteran leadership on this team. I like the culture here better than any teams I’ve had in a long time or been a part of.”

Gruden’s “seat” will only be hot if Las Vegas bottoms out this year and, in another break from what seems to be the widespread perception, that seems highly unlikely. The surest path to a team reaching the bottom of the league is a quarterback injury, but the Raiders are one of the few teams that have a true contingency plan in place.

They might have the best backup in the league in Marcus Mariota behind Derek Carr, not to mention the luxury of an emergency quarterback who might be better than some second-stringers. Nathan Peterman has now spent four years under Gruden and is coming off an unprecedented preseason where he took all but one snap.

The rest of the roster is upgraded too, and that’s largely a credit to Gruden. Almost every free agent that’s signed with Las Vegas has raved about the opportunity to work with him.

Gruden was the primary reason the Raiders were able to sign Nelson Agholor to a minimum one-year deal last year, and the wide receiver became the team’s top target outside of tight end Darren Waller. The veteran rehabilitated his career and signed a big contract with the New England Patriots in the offseason.

In a strikingly similar spot to Agholor last season steps in 28-year-old Willie Snead this year, another player who says he was drawn to the Raiders because of Gruden. Snead loved Gruden’s outlook “from afar” when he grew up watching his now-coach work as a commentator on Monday Night Football.

“It was just tremendous respect for him and it’s an honor to be able to be coached by him,” Snead said. “The energy he brings every day to the practice field, to the meetings, he keeps everything upbeat and fun. When you play for a coach like that, you can’t help but love the game. He’s asking you every day, ‘Do you like it or love it? Do you love this game?’ It’s like, ‘Coach, I love it with a passion.’ It’s a reminder every day.”

There are a lot misconceptions about Gruden, and many of them are his own doing. He likes to romanticize about his old-school football, but his offenses have been far from stuck in the past over the last three years.

Gruden utilizes run-pass option less than most of his contemporaries — though that could change Mariota is ever pressed into action — but he’s torched opponents with modern uses of motion, pace and short passing routes. Few offenses in the league have produced more efficient numbers than the Raiders over the last two years

Gruden has also been accused of being an enemy of analytics, and yet, he required all players to wear GPS-tracking technology throughout training camp so his staff could make more informed practice decisions.

“There’s reports out there that I don’t listen to that stuff,” Gruden said with a laugh. “I sarcastically say that to make some of my adversaries happy. I’m not an idiot.”

He was still prone to what analytics would characterize as some overly-conservative in-game decisions last year, but nothing worse than the majority of coaches in the NFL. Edjsports rated Gruden as the 12th best coach in the NFL last season based on its ratings system, which measures the added or lost win probability of every coaching decision made in a game.

That’s not going to land Gruden any sort of trophy, but it’s also not the type of figure that’s going to run him out of town. He doesn’t have that to be worried about, though.

Not yet. Gruden’s plan for this season is to keep doing what he’s doing with no regard for the outside judgments he leaves in his wake.

“I don’t know who does all these grades,” Gruden said with a smirk early in the summer. “They have a lot of grades out there. My grades aren’t very good, so I don’t agree with a lot of the grades.”