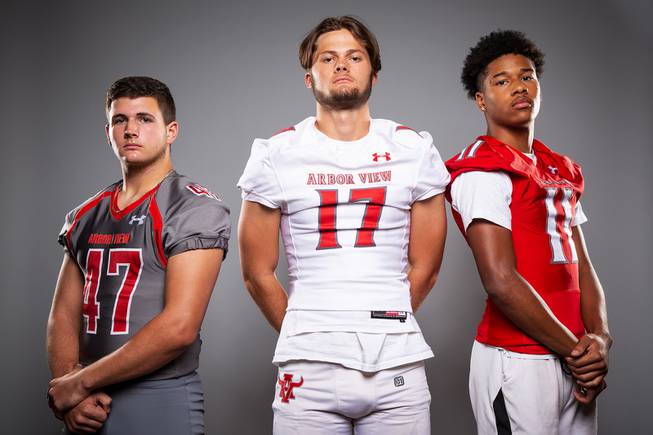 Arbor View gets its revenge against Centennial

Members of the Arbor View High School football team are pictured during the Las Vegas Sun’s high school football media day at the Red Rock Resort on August 3rd, 2021. They include, from left, Bryce Ericson, Kyle Holmes and Kyri Shoels.

The Arbor View football team wasted little time on Friday in regaining the upper hand in its rivalry with Centennial.

D’Andre Washington caught a 79-yard touchdown pass from Kyle Holmes on the game’s first play and the Aggies cruised to a 48-0 win.

After losing to Centennial in the first conference game of 2019, it’s safe to say the rematch two years later — albeit with different rosters — had much significance for the Arbor View program.

“We have been looking forward to this one for about two years now,” Arbor View coach Matt Gerber said.

Arbor View (3-1) led 27-0 after the first quarter and its defense “was outstanding” in limiting Centennial to virtually no yardage, Gerber said.

“It was a pretty dominant performance tonight,” the coach said.