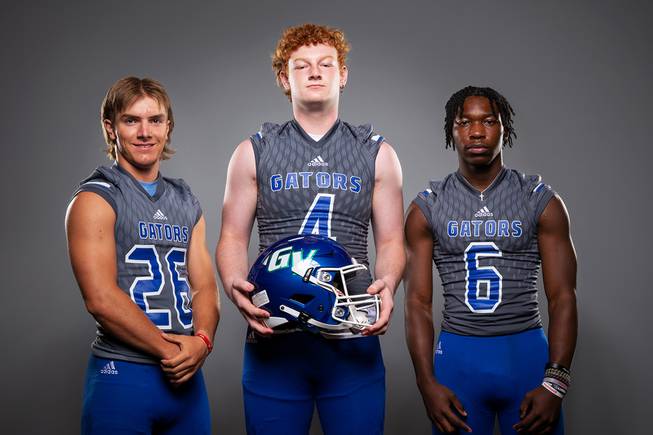 Members of the Green Valley High School football team are pictured during the Las Vegas Sun’s high school football media day at the Red Rock Resort on August 3rd, 2021. They include, from left, Mark Rerecich, Cole Castro and Jaylen McKnight.

Jaylen Mcknight rushed for two touchdowns tonight for the Green Valley football team in a 35-14 victory against host Coronado.

After losing in the final seconds last week against Palo Verde, the Gators were solid down the stretch in closing with 14 unanswered points.

“They responded pretty well. We harped all week about finishing the game,” Green Valley coach Brian Castro said. “We didn’t do that well last week and learned a lesson.”

Owen Adams, Freddy Rodriguez and Josiah Edwards all scored for Green Valley. The Gators return to action in two weeks against Basic in the annual Henderson Bowl game.

“This was a nice win going into the bye week,” Castro said.

Arbor View gets its revenge against Centennial