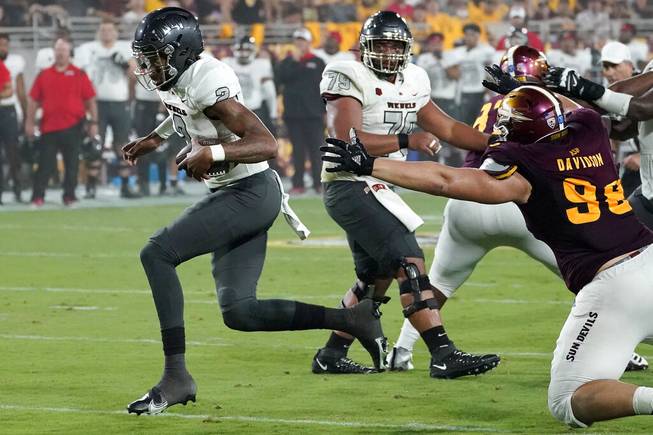 UNLV quarterback Doug Brumfield (2) runs for a touchdown against Arizona State during the first half of an NCAA college football game, Saturday, Sept. 11, 2021, in Tempe, Ariz.

UNLV’s offense came up empty—completely empty—in the second half, and No. 23 Arizona State was able to pull away for a comfortable 37-10 victory on Saturday.

After a hot start that saw the scarlet and gray jump out to an early 10-7 lead on a spectacular touchdown sophomore quarterback Doug Brumfield, the ASU defense locked in and only allowed UNLV to gain one first down in the entire second half.

Brumfield exited the game after taking a hard hit in the pocket early in the third quarter and backup Justin Rogers came in to mop up. Rogers found little success (1-of-5 for seven yards, three sacks); if Brumfield is unable to play next week, it could open the door for Tate Martell to see the field.

UNLV falls to 0-2 on the season with Iowa State coming to Las Vegas next weekend.

Arizona State put the game away early in the fourth quarter when Rachaad White plunged into the end zone for a 1-yard touchdown, extending the Sun Devils’ lead to 27-10. With Brumfield out (and the second-half offense looking pretty listless even when he was in the game), that was plenty enough cushion for ASU, which out-gained UNLV 466 to 155 on the night.

Sun Devils quarterback Jayden Daniels warmed up as the game went on and finished 20-of-29 for 175 yards and two touchdowns; he also ran for a game-high 125 yards on 13 carries.

UNLV’s upset hopes took a big hit in the third quarter, as the offense stalled and Arizona State punched in a touchdown to extend its lead to 21-10 entering the final period.

UNLV had four possessions in the third quarter and managed to pick up just one first down. The scarlet and gray only ran 10 total plays from scrimmage on those drives, which has put a physical strain on the defense. Arizona State has taken advantage by winning in the trenches; running back Rachaad White scored way too easily on a 3rd-and-8 handoff with 45 seconds left in the quarter to give the Sun Devils some breathing room.

To make matters worse, Doug Brumfield took a big hit and has exited the game. Justin Rogers piloted UNLV’s final drive of the quarter and threw two incomplete passes before taking a sack on third down.

Arizona State now has a double-digit lead and the ball heading into the fourth quarter.

Arizona State leads UNLV at half

Arizona State has taken a 14-10 lead into the locker room at halftime, but UNLV appears poised to make a serious upset bid over the final 30 minutes.

The Sun Devils regained the lead late in the second quarter on a trick play, as Daniyel Ngata took a double handoff and walked into the end zone untouched from 13 yards out. UNLV went 3-and-out on its next possession, giving ASU a chance to extend the lead just before the half. But the UNLV defense came up with a big stop, sacking QB Jayden Daniels on 4th-and-short to keep this a one-score game heading into the break.

UNLV will receive the ball to start the second half. To this point the offense has rested on Doug Brumfield’s shoulders. The sophomore southpaw has completed 6-of-11 passes for 60 yards and run five times for 33 yards and a touchdown.

UNLV came into this game as five-touchdown underdogs, but no one told Doug Brumfield.

In his first career start the lefty quarterback is putting the UNLV offense on his shoulders, as he just somersaulted over a defender and into the end zone to give the scarlet and gray a 10-7 lead midway through the second quarter.

The play came on 3rd-and-goal from the 5-yard line; Brumfield dropped back and scanned the field, and when he found no one open he sprinted straight up the middle. A defensive back met him at the goal line, but Brumfield went up and over the top, performing one full rotation before landing on his back in the end zone.

Brumfield has completed 6-of-10 passes for 60 yards while rushing five times for 33 yards.

Doug Brumfield looks very smooth so far in his first career start, leading UNLV to a field goal and an early 3-0 lead at Arizona State.

After cornerback Nohl Williams picked off Jayden Daniels in the end zone to bail out the UNLV defense, Brumfield and the offense marched nearly the length of the field to take the lead. Brumfield converted three 3rd-and-longs, hitting Zyell Griffin and Kyle Williams with chain-moving passes while scrambling for another first.

On 3rd-and-10 from the 11-yard-line, Brumfield wisely fired high and out of the end zone when he couldn’t find an open receiver and kicker Daniel Gutierrez came on for the chip shot.

Not only does UNLV have an unexpected lead, but the long drive took a lot of time off the clock, too. Arizona State will take possession with 4:35 left in the first quarter.

It’s unlikely but not impossible, as the twice-transferred former Bishop Gorman star is suited up and currently on the field for warmups at Arizona State.

Martell has battled a thumb injury through most of the offseason and did not dress for last week’s opener against Eastern Washington. He’s not listed on the depth chart for tonight—Doug Brumfield is the No. 1 QB, while Justin Rogers is No. 2—and it would probably take extenuating circumstances for him to see action in a game considering he has so little practice time under his belt.

Still, if the game is out of reach in the second half and head coach Marcus Arroyo wants to take a look, a Martell appearance is apparently on the table.

UNLV football going for first win at No. 23 Arizona State

UNLV has had nine days to plan, prep and generally tinker since its season-opening loss to Eastern Washington, and head coach Marcus Arroyo expects to see exponential growth on Saturday when the scarlet and gray face No. 23 Arizona State (7:30 p.m., ESPN2).

If there is one aspect of the UNLV offense that should travel, it’s the running game fronted by senior Charles Williams.

It took Williams some time to find his stride against Eastern Washington, but once the light went on and he got used to his offensive line he took off, posting 177 yards and two touchdowns on 28 attempts. The attempts set a new career high, while the yardage was the second-best mark of his career.

If UNLV is to hang around against the Sun Devils it would behoove them to get Williams near those career highs again. Arizona State won’t make it easy; in their win over Southern Utah last week, the Devils held SUU to four first downs on the ground and just 78 yards (3.0 yards per carry).

It’s a strong defense, so Williams won’t be able to do it single-handedly. When UNLV calls on quarterback Doug Brumfield to throw the ball, he’ll have to be on-time and on-target.

“Brumfield, he’s a kid we actually recruited,” Edwards said. “We know a lot about him. Big, strong-arm guy who can throw the football.”

While UNLV attempts to put the game on Williams’s shoulders, Arizona State will likely be trying the same approach with its running back duo of Rachaad White and DeaMonte Trayanum. They combined to rush for 116 yards and four touchdowns on just 13 carries last week, spearheading an ASU attack that piled up 228 yards on the ground.

The UNLV defense wasn’t bad against the run in Week 1, as the rebuilt front held Eastern Washington to 97 yards and 2.9 yards per carry, but that was Eastern Washington. UNLV won’t have an overwhelming size and athleticism advantage up front today, and the depth will be tested. Can players like defensive linemen Conor Murphy and Kolo Uasike and linebackers Kylan Wilborn and Jacoby Windmon stay on the field and hold up effectively over the course of the entire game?

After opening at home last week, the scarlet and gray won’t find many partisans on their side on Saturday. For the first time under Marcus Arroyo, this is going to be a true road game, against an opponent that is capable of creating (and capitalizing on) momentum.

Arroyo said he tried to prepare his players for the environment they’ll face at Sun Devil Stadium (capacity: 56,634).

“We’re going on the road, first time in our program in a really hostile environment with a crowd, with a really good football team, with a well-coached football team,” Arroyo said. “That’s going to be a challenge in itself, but then you’ve got to instill and execute and fix the things from the week before.”