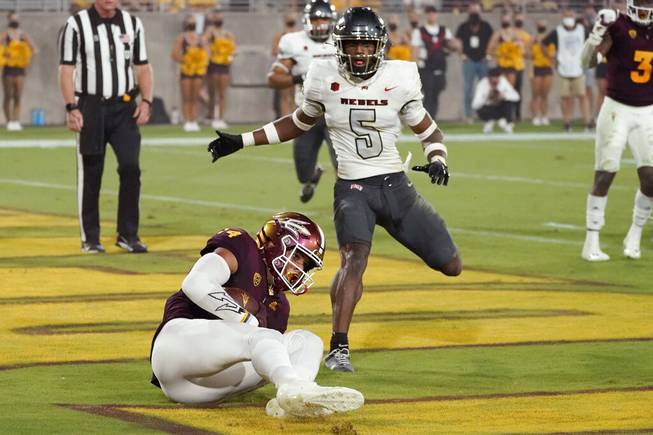 Arizona State wide receiver Johnny Wilson (14) pulls in a touchdown as UNLV defensive back Phillip Hill (5) pursues during the first half of an NCAA college football game, Saturday, Sept. 11, 2021, in Tempe, Ariz.

The less said about UNLV’s second-half performance on Saturday, the better.

Let’s get the gruesome details out of the way as quickly as possible. UNLV got the ball to start the second half, trailing at No. 23 Arizona State, 14-10. At that point the scarlet and gray were thinking upset. Then they proceeded to gain 19 total yards (on an average of 0.9 yards per play) and pick up just one first down over the final 30 minutes.

With the UNLV offense spinning in place, Arizona State pulled away for a 37-10 victory that left head coach Marcus Arroyo with no choice but to state the obvious.

“The second half, we sputtered,” Arroyo said. “We’ve got to execute. It’s going to take two halves of football to beat a team like that on the road.”

The key play of the game turned out to be a rollout pass attempt by quarterback Doug Brumfield with nine minutes left in the third quarter. The sophomore took a big hit on the play and was forced to leave the field. He returned for UNLV’s next drive but took a third-down sack and exited the game for good.

Without Brumfield to leap over defenders and flip into the end zone (which he did on a spectacular second-quarter touchdown run to give UNLV a 10-7 lead), the offense died. Justin Rogers replaced Brumfield and mostly just took sacks; Rogers completed 1-of-5 passes for seven yards and was brought down in the backfield four times.

While UNLV punted over and over again, the Arizona State offense ran 39 plays in the second half and wore down the scarlet and gray. It scored touchdowns on three consecutive possessions spanning the third and fourth quarters to turn a potential upset bid into a laugher. For the game, Arizona State ran 76 plays to UNLV’s 51.

UNLV is now 0-2 on the season, and things could get worse before they get better if Brumfield is out for any extended period of time.

Brumfield completed 6-of-14 passes for 60 yards and ran eight times for 43 yards. After the game Arroyo declined to give an update on Brumfield’s injury, but it goes without saying that the team will need him back if they’re to stand a chance next weekend against Iowa State.

Charles Williams followed up his 172-yard, two-touchdown performance in the season opener by carrying 13 times for 35 yards against an Arizona State defense that was just too fast up front.

Arroyo said while he did see some growth in his team from Week 1 to Week 2, the bottom line is that they didn’t play nearly well enough to win.

“We took care of the football this game; we weren’t explosive enough. Did a good job on third downs in the first half; didn’t do a good job in the second half on third downs. You get 51 plays in a game, you’ve got to be really good and those have to be efficient plays to beat a team like that.”