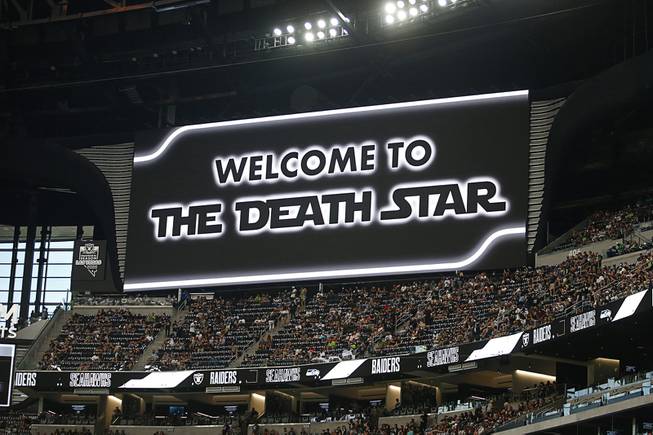 A sign before an NFL preseason football game between the Las Vegas Raiders and the Seattle Seahawks, Saturday, Aug. 14, 2021, in Las Vegas.

• Who: Ravens at Raiders

The Raiders are desperate to develop a homefield advantage at Allegiant Stadium. Defending the $2 billion venue they colloquially refer to as “the Death Star” has been one of the primary talking points of the offseason. The effort begins in earnest with the first Monday Night Football game of the year against what’s been one of the NFL’s best teams over the last three years. Baltimore hasn’t missed the playoffs since quarterback Lamar Jackson took over behind center in 2018, peaking in 2019 when the quarterback won the MVP award as part of a 14-2 season. The Raiders have only ever encountered Jackson once, in a 34-17 loss on the road on November 25, 2018, where they gave up 249 total yards and two touchdowns to him. After a big victory over the Saints in Allegiant Stadium’s debut last year — where Las Vegas came in as an identical 4.5-point underdog on Monday Night Football —the Raiders lost six of their remaining seven home games, directly leading to a postseason absence.

Homefield advantage has steadily decreased across the NFL until all but bottoming out last year when hosts only outscored visitors by.05 points per game across the entirety of the regular season. There’s a theory that home teams will bounce back in 2021, largely because of the presence of fans after last season was contested mostly without them in the midst of the first wave of the pandemic.The Raiders always had a solid advantage at the Oakland Coliseum behind the strength of the “Black Hole” and the rest of their notoriously rowdy and passionate fan base. They’re confident they can recreate the scene at Allegiant, and there’s no time like now to start with a sellout crowd of 65,000 fans expected for the first time. Crowd noise can be simulated but never quite duplicated in practice, and loudness when the Ravens have the ball could certainly affect them negatively after getting used to a year of games being contested in silent, empty venues.

“I still sometimes pinch myself when you’re out there looking at the mountains of Las Vegas, you see the Strip down there and you’re getting ready to play pro football here. It’s really a credit to Mark Davis and a lot of people in this city who made this happen. Vegas is an exciting place and I hope we give them a show that’s worth the price.” -Coach Jon Gruden on going into his first local regular-season game with fans

“I’ve been pissed off all offseason. I’ve been very, very angry. I’ve been at peace, but I’ve been mad at the same time, if that makes sense. I had a lot of people doubting me this offseason and I’m still keeping it going. I’m thankful to be here but that burning desire you’re talking about is on 100 right now.” -Linebacker K.J. Wright on the frustration he felt during free agency before signing with the Raiders

“Dual-threat quarterback — he can throw, he can run, he can do magic tricks apparently.” -Linebacker Cory Littleton on Ravens quarterback Lamar Jackson

“I’m just looking like, ‘Wow, this is amazing.’ Miami has (Club) LIV up top (of the stadium) but there’s nothing like this. Club sections all over the place. It’s like, ‘Yo, Monday Night Football is going to be crazy.’ I can only imagine.” -Wide receiver Willie Snead after checking out Allegiant Stadium and the Wynn Field Club in the North end zone

Baltimore has led the NFL in rushing in back-to-back years, and while Jackson draws the lion’s share of the credit, its offensive line has just as much to do with the success. Led by All-Pro and Bishop Gorman High graduate Ronnie Stanley, the Ravens are bullies up front in the run game. They’re expected to be as strong as ever this season despite trading the tackle opposite of Stanley, Orlando Brown, to the Kansas City Chiefs in the offseason. It’s a big unknown how a retooled Las Vegas defensive front will fare against Baltimore. The Raiders should be fine if the line — led by expected starters Yannick Ngakoue, Johnathan Hankins, Quinton Jefferson and Maxx Crosby — is as explosive as coaches think it has the potential to be. But it was also assembled with an eye on pressuring quarterbacks more than disrupting run games, meaning this first game will be an ultimate challenge in testing what could be a potential weakness.

Starting the season with any other choice would be equal parts disrespectful and foolish. The 6-foot-6, 255-pound Waller is the unquestioned focal point of the Raiders’ offense after setting a franchise record with 107 receptions last year. There’s a good chance he breaks his own record this year if he stays healthy, and he might get on pace immediately. Out of all receiving targets, the Ravens performed the worst against tight ends last year by Football Outsiders’ DVOA ratings. Waller may also relish a chance to play against his former team, as he spent his first three seasons in Baltimore before Las Vegas claimed him off Baltimore’s practice squad late in the 2018 season. It’s proven to be the best move of coach Jon Gruden’s second tenure with the team. Over the last two years with the Raiders, Waller has amassed 197 receptions for 2,341 yards and 12 touchdowns.

That’s how many career tackles the newest Raider, outside linebacker K.J. Wright, has racked up over the course of his 10-year NFL career, all with the Seattle Seahawks. That ranks 101st all-time in the NFL record books, and sixth among active players. Tackles aren’t a statistic that illustrates quality, but compiling as many as Wright has shows his reliability and longevity. On paper, the 31-year-old looks like exactly what the Raiders needed to help turn around their defense. Wright only came to a contract agreement with the Raiders less than two weeks ago but vowed he’d be “ready to go” for the season-opener. He says he’s in the best shape of his career, and he’ll need to be in order to play a key role in containing Jackson from getting loose in the open field.

Edwards and Zay Jones were the best receivers of training camp, and it wasn’t all that close. With Waller missing an extended stretch of preseason practices to rest, Raiders quarterback Derek Carr seemed to develop a deadly rhythm with both of them. Jones will get some snaps against the Ravens, but Edwards is at the top of the depth chart and could be a go-to option. With that in mind, this yardage number seems a little short. Edwards doesn’t have the big-play ability and isn’t as much of a deep threat as his fellow second-year starter, Henry Ruggs, but that’s advantageous for this matchup. The Ravens rarely give up big plays and are more likely to surrender intermediate routes — the exact type that Carr has been finding Edwards on continually for the last couple months.

Plum scores 26 of her 30 points in 2nd half, Aces beat Wings