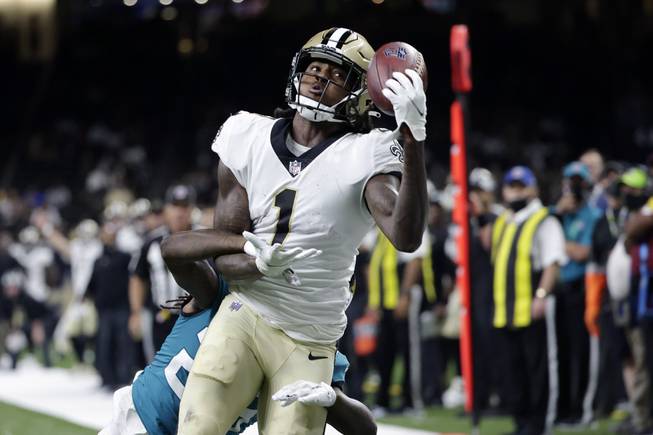 Point spreads aren’t enough when it comes to the NFL.

There are so many ways to bet America’s most popular sport, and I don’t want to ignore the rest of them in service of the most popular method. So, for the second straight year, Talking Points is bringing back the Sunday Sweats column that includes four weekly NFL-centric categories to supplement the game picks earlier in the week.

It was a blast last year and ended up quite profitable, adding to the bottom line of the pre-existing weekend wagers series. Weekend wagers will go into hiatus again for the Sunday Sweats.

It’s NFL season now, and there’s just so much to cover, so much to handicap.

Read below for this week’s bets as part of the Sunday Sweats column.

Start the Sunday Sweats column with a Monday Night Football play? Makes a lot of sense, right? Maybe not, but I’ve neglected totals in my preparation for the season and Week 1, and therefore, none are jumping out to me. Possibly with the exception of the Raiders’ first open-to-fans Allegiant Stadium appearance. Both of these teams are going to run the ball a lot, keeping the clock running and cutting down on the chances for points. The Raiders were in a lot of shootouts last year, but they should find themselves in fewer this year. Their defense has looked much-improved in training camp. The Ravens’ defense is always stingy. I’d expect something like a 24-20 game here.

No matter how this column winds up, my best call came a week ago in the final weekend wagers piece (for now) when I decided to jump into the teaser fray early. A lot of the textbook teaser options — going through the 3 and 7 — are gone including my favorite from a week ago. That was the Washington Football teased to +7.5 when it was a 1.5-point underdog, as I placed a bet on the Football Team +1.5 and the 49ers at -1.5. The only obvious two-team choice left is 49ers -2.5 and Rams -1.5, but I don’t have a great feeling about that one so I’m going to go a little off the beaten path. Here, I at least get through the 7 and 10 (almost) with two teams that should be in low-scoring games. I don’t see either the Jets or the Steelers losing by double digits, so while I may not love it as much the earlier Football Team-49ers pairing, I still think this one is safe.

Same basic formula as last year: Find two of my favorite moneylines and hope to match with a sports book that has better-than-market prices on them. I may occasionally gamble with a three- or four-teamer, but let’s try to bank a profit first. I’m looking for any and all opportunity to bet against Tennessee this year as it may have the worst defense in the league and should see close-game luck from the last two years regress. This is a great spot with Arizona at +135 when the Cardinals arguably should be closer to a pick’em. As for Atlanta, I thought the opening prices of -200 and -4 months ago were more accurate than the current consensus of -175 and -3 (-120) currently available. William Hill is even lower than that on the Falcons, with a -170 available. I’ve got a sneaking suspicion there’s late steam on Atlanta tomorrow to make the -170 price tremendous value.

The Saints are going to give the Packers problems. Jameis Winston is going to give the Packers problems. And if those two statements prove true, it’s going to have to happen in part through the Saints’ top wide-receiver target. There’s no doubt that’s the second-year Tennessee product coming into the season. Callaway showed how electric he could be and how much chemistry he had developed with Winston in the preseason, and even if he can’t hit those heights when the games matter, he should at least be able to get over this short number. Like last year, I’ll also have a weekly prop play on the Raiders’ game that runs in the gameday preview but is tracked here. Look for that on Monday this week. Spoiler: It’s another over on a wide receiver.

Aphibarnrat rode a putting heater to the top of the leaderboard after two rounds in England but he cooled off and fell back on Saturday. More of the latter should be expected on Saturday. Despite sitting one stroke behind, Sharma has been the better overall player and entered on better form. The 25-year-old from India has been grinding away on the European Tour this year, putting up consistent results. He sits second in strokes-gained tee-to-green in this week’s tournament and profiles as more likely to keep up his success on Sunday than Aphibarnrat.