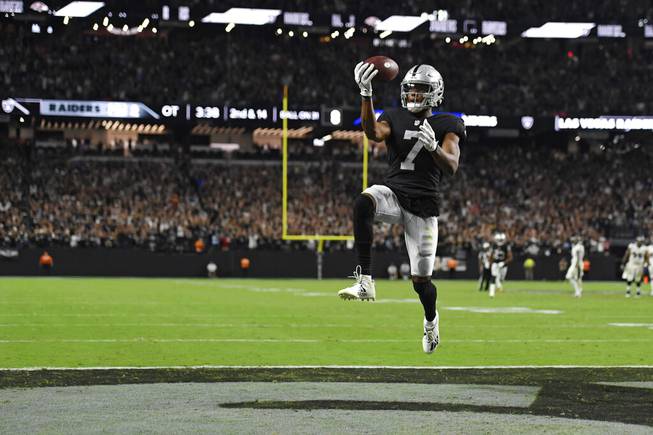 The Raiders were down and out at several points in Monday night’s season opener, but Derek Carr, Daniel Carlson, Carl Nassib and Zay Jones were able to produce some late-night magic in a 33-27 overtime victory.

What we learned from a Monday night nailbiter:

Jon Gruden opted not to play his starters in the preseason, and the offense looked summarily rusty for most of the opener. Protection broke down on passing plays, the timing with receivers was off, and a shotgun snap flew past Derek Carr to stall the first drive. It was a mess.

Carr and his crew eventually got things straightened out, mostly. Carr led two late scoring drives in the fourth quarter to send the game to overtime, and though he missed an open receiver on the goal line on the first possession of OT (a pass that was deflected and intercepted), he bounced back with the game-winning 31-yard strike to Zay Jones.

Carr completed 34 of 56 passes for 435 yards with two touchdowns and one interception.

Though the running game sputtered for much of the evening (21 carries, 82 yards), one somewhat bright spot was that the Raiders actually got some production out of their young wide receivers. Eleven of Carr’s 12 first-half completions went to tight ends, slot receivers, running backs and fullbacks as second-year wideouts Henry Ruggs and Bryan Edwards were non-factors.

They came alive late, however. Ruggs caught two passes late in the fourth quarter to set up the Raiders’ game-tying touchdown with nine minutes to play, and after Baltimore kicked a field goal with 37 seconds left to take a 27-24 lead, Edwards took over. Edwards caught two passes from Carr on the final drive (20 and 19 yards, respectively) to position Daniel Carlson for the game-tying field goal.

In overtime, Edwards hauled in a spectacular 39-yard bomb that was initially ruled a game-winning touchdown (replay overturned it and placed the ball at the 1).

Ruggs finished with two catches for 46 yards, while Edwards caught four for 81 yards. There’s a lot of work to be done on offense, but if the youngsters can produce like that all season in support of No. 1 target Darren Waller (10 catches, 105 yards), the Raiders’ passing game can flourish.

Despite the stops and starts, Carr was all smiles in his post-game press conference.

The Raiders defense did an admirable job containing Baltimore quarterback Lamar Jackson for most of the night, even when it looked like the former MVP was on the verge of taking over the game.

The Ravens’ second touchdown was all Jackson, as he eluded two defenders in the backfield, stepped up in the pocket, then rolled right to buy time before firing a precise 10-yard laser to Marquise Brown in the back of the end zone. It was a play few quarterbacks would think of attempting, and Jackson was downright nonchalant in pulling it off.

Midway through the fourth quarter, Jackson saw a matchup he liked: speedy wide receiver Sammy Watkins 1-on-1 against linebacker Nick Kwiatkoski. Jackson took advantage by lofting a deep bomb to Watkins for a 49-yard gain. Latavius Murray rolled into the end zone on the next play to give Baltimore a 24-17 lead with six minutes remaining.

On the final drive of regulation, Jackson scrambled away from pressure and zig-zagged his way upfield for a pivotal 28-yard gain that moved Baltimore into Justin Tucker’s field goal range.

The Raiders finally got to him in overtime. On a key 3rd-and-7, defensive end Carl Nassib crashed down the line of scrimmage and sacked Jackson, forcing the ball out in the process. Las Vegas recovered the fumble at the Ravens’ 27-yard line, setting up a short field for the game-winning drive.

Jackson finished with 235 passing yards and 86 rushing yards and only accounted for one touchdown, and as strange as it may sound, those are not eye-opening numbers compared to what he has done to other defenses around the league. When it mattered most, the Raiders’ rebuilt defense was able to contain him.

Maxx Crosby’s performance on Monday must have the Raiders dreaming about the kind of impact he can make this season.

The third-year defensive end was all over the field—more specifically, he was all over the Baltimore backfield, chasing down Jackson for 2.0 sacks while also registering four quarterback hits. That’s about as good a line as you can hope to put up against Jackson, who is as elusive as any NFL quarterback to ever take the field.

And Crosby’s big plays came in big moments. On the Ravens first drive, he broke through to sack Jackson on third down, forcing a punt. He also killed Baltimore’s opening drive of the second half with a third-down sack.

If Crosby can make the leap and become this kind of game-changing player on a week-to-week basis, we’ll be able to look back at this Monday Night Football showing as his coming out party.

Having to win twice: Raiders thrill in overtime collapse, comeback

Plum scores 26 of her 30 points in 2nd half, Aces beat Wings