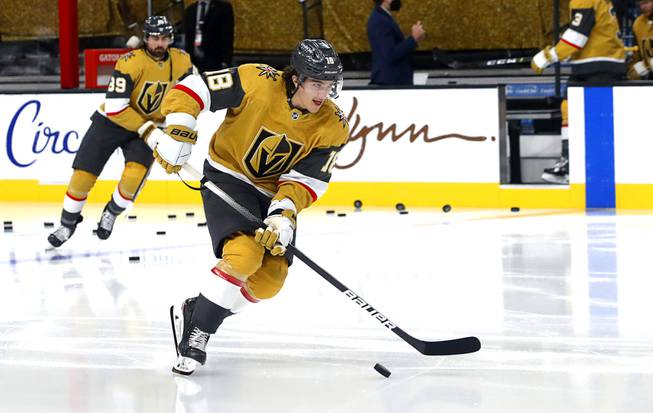 Vegas Golden Knights left wing Peyton Krebs (18) warms up before a game against the St. Louis Blues at T-Mobile Arena Saturday, May 8, 2021.

The weather is still hovering near 100 degrees in Southern Nevada, T-Mobile Arena isn’t open for games and you won’t hear the sound of pucks, skates and sticks on the ice quite yet, but a new season of Golden Knights hockey officially returns today.

The Golden Knights open rookie camp at City National Arena with medicals and fitness testing, and on Thursday the first on-ice workouts. The Vegas rookies will travel to Arizona for three exhibitions on Friday, Sunday and Monday.

Training camp for the full squad opens next week.

The star of rookie camp will be Peyton Krebs, the 2019 first-round pick who is the unquestioned top prospect in the Golden Knights’ system.

Krebs has done nothing but dominate since his name was called by Vegas — 103 points in 62 Western Hockey League games over the past two seasons, which earned him last year’s league MVP honor, eight points in seven games with Team Canada at last year’s World Juniors, five points in five games with the Henderson Silver Knights, and even a call-up to the NHL, picking up an assist in four games with the Golden Knights.

Had Krebs not been injured by an errant slapshot May 8 against the Blues, we may have seen him in the postseason. Because he was considered an under-20 player by the NHL’s calendar last season, Krebs could play in up to six games without burning a year of his entry-level contract he signed two years ago.

The injury kept Vegas from having to decide whether it wanted him to play in the postseason and use a year of his deal, or keep him on the bench and have his deal slide another season.

But now Krebs is too old to return to juniors, and will play professional hockey in the valley this year. The question remains whether that will be in Henderson with the Silver Knights or in Vegas with the Golden Knights.

Krebs has shown he’s ready for the challenge of the NHL, so we likely won’t learn much about him as he spends the week competing against other rookie players. The big test will come next week, when he’ll skate with the team’s veterans trying to make the big club, as well as the seven-game preseason slates that begins Sept. 26.

Still, Krebs is one of the most exciting young players to ever come through the Vegas system. Watching him in camp and the three-game rookie tournament in Arizona will be an excellent appetizer for Golden Knights fans ahead of the main course of the season.

Aside from Krebs, several of the Golden Knights’ best prospects have little chance of making the NHL squad.Brendan Brisson, a 2020 first-rounder, won’t attend camp, as he’s with his college team in Michigan; Russian center Ivan Morozov is signed to a KHL contract for one more season; 2021 first-rounder Zach Dean is still 18; and Vegas will likely want to see a repeat performance from 2020 third-rounder Lukas Cormier, who was dominant in the Quebec Major Junior Hockey League as an 18-year-old last season. Keep a close eye on Dean and Cormier, who are poised for big seasons in the Quebec league and whom Vegas fans will get a first look at this week.

But there’s still plenty of players who could crack the NHL roster.

Winger Jack Dugan led college hockey in points just two seasons ago, and while on the older side as far as prospects go (23), he did have 33 points in 37 AHL games last year and will get a look at some NHL games this year.

Lucas Elvenes is in a similar situation as Dugan. A fellow fifth-rounder who turned himself into a legitimate prospect, Elvenes had a strong debut season in the AHL two years ago. He dipped a bit in production last season, but could be in a line for a call-up sometime this season.

Kaedan Korczak seems to get lost in the shuffle of Vegas prospects, but he’s perhaps the most NHL-ready with the highest upside. Taken in the second round of the 2019 draft, Korczak profiles as a defensive blue-liner but has still shown some offensive flair in juniors, including 55 points in 75 WHL games since his draft. He played in the WHL, AHL and with Canada at the World Juniors last year, and at just 20, could be knocking on the door of NHL duty.

Vegas is set at the goaltending position with Robin Lehner as the starter, Laurent Brossoit as the backup and Logan Thompson as the first option out of the AHL, but three goalies will take part in rookie camp.

Jiri Patera has been in the Golden Knights’ system since he was taken in the sixth round of the inaugural draft. He split last season between the Czech league and the AHL, and is expected to return to Henderson this season.

The other two are relative newcomers from Sweden: 2020 fifth-rounder Jesper Vickman and 2021 seventh-rounder Carl Lindbom. Vickman, 19, will make the jump across the ocean to join WHL Vancouver this season, while Lindbom, 18, will remain with Djurgardens IF J20 in the Swedish junior circuit. Both are several years from making an impact in Vegas.

UNLV basketball staying home for most of non-conference schedule

College football by the odds: Vegas preview and picks of every Week 3 game