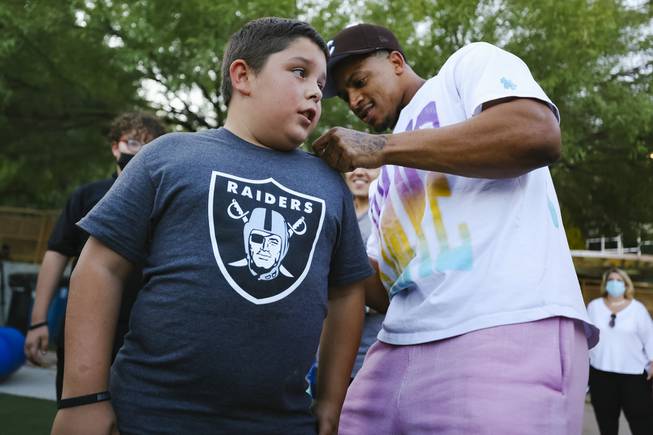 On Tuesday evening at the Springs Preserve amphitheater, he didn’t need to — his own wide grin was indicative. About 50 children and their mentors from Big Brothers Big Sisters of Southern Nevada were on hand to receive free athletic shoes. Abram — who 24 hours before was playing in his team’s thrilling overtime victory at Allegiant Stadium — was their guest of honor.

The honor appeared to be his.

The mere sight of the NFL player sent the children, and some of the adults, into a craze. Photos were snapped, and autographs signed, but there would be more time later for that: Abram wanted to play cornhole.

So, they followed, creating what looked like a magnetic snake, zigzagging toward the two wooden boards placed on the artificial grass. Soon, he was teasing them and teaching them how to best throw bean bags at the hole in each board.

They moved on to the shoe booth lined up with orange boxes. One by one, the children approached Abram, who shared some words and took photos with them as he tried hard to rebuff pleas to sign their new sneakers.

Instead, he autographed the boxes, each with a personalized message, such as: “To the Great Selene, the One & Only!” and “Raider Nation! You’re Amazing. Never Forget!”

“Everybody needs somebody in their corner … helping them, leading them in the right direction,” Abram said later, when asked about how crucial mentorship is to the development of a child. “We all make mistakes along the line somewhere, so to have somebody to help guide you along the road, it’s very helpful, very useful.”

Abram, who has his own child mentorship nonprofit, vowed to continue assisting the community at similar events.

The giveaway of 170 pairs of shoes, one for each child in the Big Brothers Big Sisters of Southern Nevada mentorship program, was sponsored by Health Plan of Nevada, which aims to promote active and healthy lifestyles.

“It starts young,” said Dr. Ruth Ezhuthachan, explaining that the lifestyles carry into adulthood, helping eliminate such maladies as stress and depression.

The pediatrician has been with the organization for two decades. “These are our neighbors, these are people we know,” she said about the children. “I’m helping my neighbors, I’m helping my friends, family, essentially. … Your community is your family.”

In a short presentation, Las Vegas City Councilman Brian Knudsen told the children about the dedication of the volunteer mentors with Big Brothers Big Sisters.

One of the kids was 9-year-old Khairi.

“I’m very happy and excited to be here,” the boy said. Asked if he knew what Nike was, his eyes widened and his voice pitched higher with an excited “ye-e-es!”

“He’s very cool,” the boy said about his “Big,” Damon Williams, who wasn’t able to make it to the event.

Williams, who was once a “little” in the program, suggested that the boy’s mother accompany him, one of the few parents who made it, his match support specialist said.

How much does the boy like the program? “Probably more than I like anything else,” he answered.

Not long after, Khairi was breaking in his new silver sneakers, throwing a football into a net and then getting to meet Abram.

Children in need of positive adult support are referred through different organizations across the valley, then paired with volunteers in the hope that they can build a long-term relationship, she said. The “littles” in the program often see better grades at school and better relationships with their peers and family members, she added.

“It’s amazing what just a few hours a month of a consistent, dedicated adult in their life, an additional (life)line, can help,” she said.

Latham said the pandemic hampered in-person interactions until earlier this year, but that the meetings were happening virtually.

“It’s very fulfilling to watch a young person grow up, to see the changes in them, to be their confidant and their trusted adult in the world. So, it can make a big difference in the life of the kid,” she said.

And it’s also very fun, she added. “Where else can you do bouncy-pony races?”