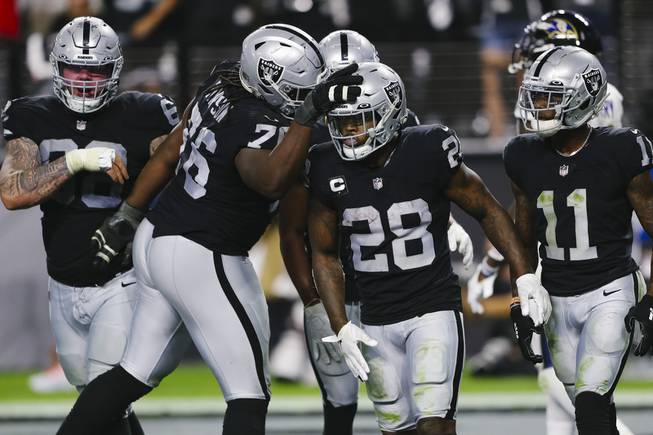 Josh Jacobs out of Raiders’ game at Steelers; Yannick Ngakoue to play

Las Vegas Raiders running back Josh Jacobs (28) celebrates with his team after completing a touchdown during the second half of an NFL football game against the Baltimore Ravens at Allegiant Stadium Monday, Sept. 13, 2021.

Raiders Pro Bowl running back Josh Jacobs missed practice all week, and now will not play against the Pittsburgh Steelers on Sunday.

Coach Jon Gruden made the announcement in his final media availability of the week, adding that recent acquisition Peyton Barber would assume some of his lead running back duties. The 27-year-old out of Auburn has spent most of his five-year NFL career with the Tampa Bay Buccaneers, but Las Vegas claimed him off of the Washington Football Team’s practice squad.

“We really think he’s a heck of a back coming from Tampa,” Gruden said. “We’ve really had the chance to get behind the scenes on him. I like the way he runs and catches and picks up blitzes.”

Jacobs is listed on the injury report with toe and ankle injuries. He was questionable to play in the Raiders’ Week 1 win over the Ravens with illness and injuries but convinced the coaching staff to let him on the field.

He registered 10 carries for 34 yards and two touchdowns. Some may have assumed high-priced free-agent Kenyan Drake would slide into Jacobs’ featured role, but Gruden hinted the six-year veteran would remain a passing-down back.

“Kenyan will continue to play a role in our system no matter who the other back is,” Gruden said. “We’re excited about this opportunity to see what we have.”

In better news for Raiders’ fans, edge rusher Yannick Ngakoue will play through a hamstring injury against the Steelers. He exited in the fourth quarter of the Ravens’ game but practiced with his leg taped up the last two days after being limited on Wednesday.

“He’s one of our toughest players,” Gruden said of Ngakoue. “He’s a team captain almost unanimously selected, it says a lot. He wants to win and knows we’ve got to have him to win. I admire these players that go to extreme measures to do what they have to do to play mentally and physically and he’s at the top of the chart when it comes to that.”