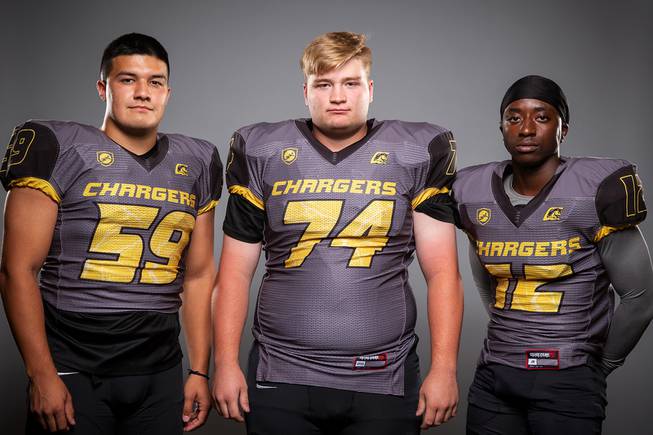 Clark gets new opponent on Thursday, improves to 4-0 on Friday

Members of the Clark High School football team are pictured during the Las Vegas Sun’s high school football media day at the Red Rock Resort on August 3rd, 2021. They include, from left, Reyes Reynaga, Weston Petty and Lebon Maquashi.

The Clark High football team was going through its final preparation on Thursday afternoon for the following day’s game when word came down: The Spring Valley program was dealing with a positive COVID test and had to cancel.

A few hours later, Clark coach Deumaine Reeder’s phone rang with an update: The schedule makers at the Clark County School District found in a new opponent, Sierra Vista. But the game would be played in about 18 hours.

Even though Clark had little time to prepare or study film on Sierra Vista, the Chargers still managed a 31-14 win in improving to 4-0 on the season.

“At the end of the day, no matter how prepared you are or aren’t, football is still blocking and tackling,” Reeder said.

Reyes Reynaga and D’on Williams had rushing touchdowns for Clark, Mathew Solomon recovered a blocked punt for a score, and Lebon Makwashim had a 60-yard interception return for a touchdown. Lucas Petty added a field goal.