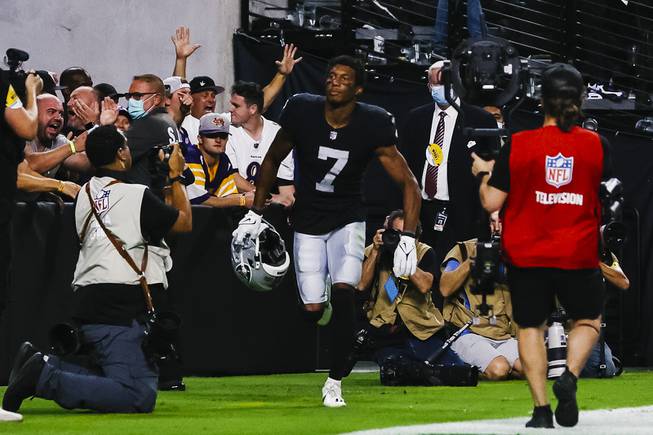 Analysis: Zay Jones won’t be a one-hit wonder for the Raiders this season

Las Vegas Raiders wide receiver Zay Jones (7) removes his helmet after running in the game winning touchdown during overtime of an NFL football game against the Baltimore Ravens at Allegiant Stadium Monday, Sept. 13, 2021.

Las Vegas Raiders receiver Zay Jones scored one of the most memorable touchdowns of last year’s first-ever game at Allegiant Stadium — mainly because of his hand-sanitizer celebration that followed — and then all but disappeared the rest of the season.

There might be a temptation to think history will repeat this year after the veteran backup scored the overtime game-winner against Baltimore in front of the first live crowd in Allegiant Stadium history on Monday night. Don’t subscribe to that theory.

The Raiders’ coaching staff wants to avoid overlooking Jones in his third year with the Raiders, and focus on keeping him more involved in the offense throughout the season.

“I’ve got to get him on the field more,” coach Jon Gruden said earlier this week. “It’s a competitive group of receivers. He’s an energy force for us. He finishes everything.”

Jones played 20 snaps against the Ravens, the second-fewest among the Raiders’ receivers, and actually saw a slight dip in playing time percentage-wise (from 26.69% of plays last year to 23.26% in Week 1 this year). He made the most of those opportunities, catching a pair of passes for 46 yards but also running crisp routes and providing solid blocking.

He was the highest-graded receiver on the team by Pro Football Focus in Week 1 and caught the coaches’ eyes — something he’s done all offseason. Teammates have raved about Jones’ dedication ever since the end of last season and were ecstatic when it paid off against the Ravens.

Most players made available to media after the win went out of their way to praise Jones, including quarterback Derek Carr, who hit Jones perfectly in stride with the decisive deep ball.

“I can’t be happier,” Carr said. “If I had to pick somebody (to catch the pass), I would probably pick Zay. Please let Zay catch the game-winner because he does so much for us.”

For the second straight offseason, Carr organized throwing sessions with his receivers at parks around town before team activities began in the summer. Jones didn’t miss any of them.

Even when Carr requested to throw at 6 a.m. — he says as a way to test his teammates’ determination — Jones showed up.

“When I needed him the most, he was there for me,” Carr said. “Regardless if he caught that ball or even went on that route, he’s family to me. But the fact that he did, I just get to celebrate him. I get to celebrate his success. He had a rough time in Buffalo, and he found a home here.”

Jones still holds the Football Bowl Subdivision record for most career receptions (399) from his time at East Carolina. His storied college career was part of the reason the Bills used a second-round pick on him in the 2017 NFL Draft.

He started promisingly in Buffalo, racking up just short of 1,000 yards and nine touchdowns in his first season, but eventually fell out of favor. The Bills traded him to the Raiders in the middle of the 2019 season and his tenure with the Silver and Black has been similarly disappointing — at least on the surface.

Jones amassed only 14 catches for 301 receiving yards and a touchdown in his first two seasons with the Raiders but was quietly making his mark behind the scenes. He felt so confident in his place on the team that he bought a home in Las Vegas before the Raiders had completed their move.

“Even with one year left on my contract, I told my parents, ‘I’m moving to Las Vegas,’” Jones said during training camp. “They were like, ‘Are you sure?’ I was like, ‘Yeah, I want to do this. This is something I feel like I need to do.’”

Jones became a free agent this offseason, but never seriously considered signing anywhere else. He agreed to a one-year deal to return to Las Vegas.

“I really wanted to plant some roots down and really establish myself and become part of this team, and really prove I belong here and can do something helpful for this football team,” he said. “That was my mindset. It wasn’t about trying to seek money elsewhere. It was really just about wanting to finish something I started in my journey.”

With the Raiders bringing in veteran free agent receivers John Brown and Willie Snead in the offseason, some saw Jones as long shot to make the team. Not those closest to him, though.

Gruden famously warned not to sleep on Jones on the opening day of training camp, and the receiver went on to be arguably the most productive pass catcher on the roster this summer. Brown wound up being a surprise release with Jones having earned a roster spot.

“He lives in the neighborhood right across the street from me so (I’ve been) just hanging out with him a lot over the summer and talking about life, the ups and downs,” tight end Darren Waller said. “To see him go out there and make that happen, that’s like seeing your brother go out there and do something crazy.”

After slow starts against the Ravens, Raiders starting receivers Henry Ruggs and Bryan Edwards broke out late in the game. Waller and slot receiver Hunter Renfrow, meanwhile, are secure in their spots as two of the team’s top targets, but Gruden thinks there are enough passes to go around to expand Jones’ role.

Everyone with the Raiders sees the game-winner against the Ravens as the beginning of a big season for Jones, and not the peak that last year’s early success proved to be.

“You could talk to any one of the offensive players in the locker room and there is a lot of love for that player,” offensive coordinator Greg Olson said. “He’s a tremendous player as well. So, we’re fortunate in our opinion to have the depth that we have.”