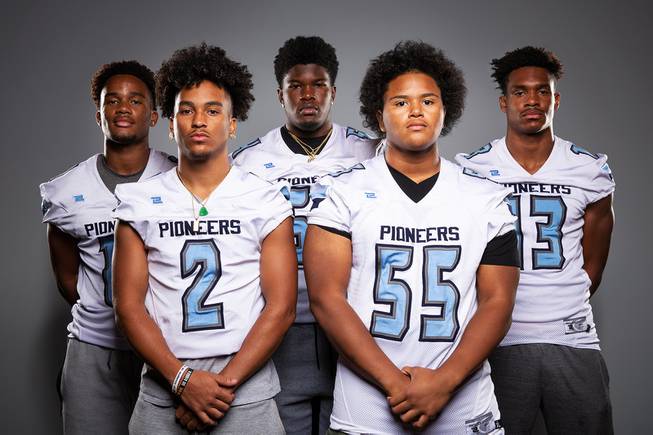 In the minutes before the Faith Lutheran vs. Canyon Springs football game Friday night, players and coaches from both teams came together at midfield for a prayer.

Canyon Springs coach Gus McNair couldn’t help breaking down in tears. His teenage son, Tyrique Watley, was shot and killed Aug. 29 in Oakland, Calif., where he was playing football for Lincoln College.

The pregame moment started a night of healing for the McNair family, whose younger son, Tayvian McNair, had 41 receiving yards in the Pioneers’ 28-27 overtime win. When Faith Lutheran lined up for a 2-point conversion in overtime to win the game, Gus McNair said he couldn’t help looking up to the sky.

“We found a little bit of luck tonight,” coach McNair said. “I looked up and there was one star shining in the north, and only one star.”

The East Bay Times reported Watley was shot in Oakland’s Uptown district. Police believe his group wasn’t the intended targets and “he had nothing to do with what was happening,” McNair said.

Watley’s funeral was Thursday in Las Vegas. During the two weeks following the shooting, McNair continued to pour hours into the football program in getting them ready to play. The end result was a beautiful tribute in the first game after the incident.

“The kids came through for me in my lowest moment,” McNair said.

McNair was overly appreciative of the Faith Lutheran program, which all week included the McNair family in their prayers. Assistant coach Jake Kothe led the pregame prayer, which had many from both sides in tears.

“Hats off to that school. They are a class act,” McNair said. “This is bigger than the game. It was being supportive of another community and coach.”

The win was the first of the season for Canyon Springs, who started the season with about 24 players because of the pandemic. Students who fell behind during the pandemic were required to sit out three weeks to open the season, and that was the unfortunate reality for many in the Pioneers program who had obstacles during remote learning last school year.

“We are slowly piecing it all together,” McNair said. “We finally have all of our guys.”

That includes Tayvian McNair, who is just a freshman and well on his way to having a great high school career. “Tay is just special,” he father said. “The kid just wanted to honor his brother.”

Canyon Springs jumped out to an early 13-0 lead thanks to a 2-yard Darion Smith touchdown run and a Willis touchdown pass to Ricardo Pulcher.

Faith Lutheran proceeded to score 21 unanswered points before Davion McCoy scored on a 17-yard touchdown run with four minutes remaining and Willis connected with Dionn Whittaker for the 2-point conversion to even the score and bring overtime.