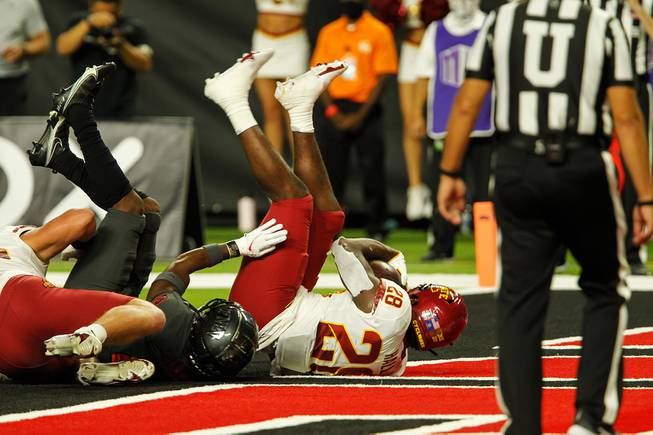 Iowa State’s Breece Hall (28) scores a touchdown in the first quarter of their game against UNLV at Allegiant Stadium Saturday, Sept. 18, 2021. The Cyclones beat the Rebels 48-3. CHRISTOPHER DEVARGAS

This one is mercifully over, as Iowa State punished the home team for 60 minutes in a 48-3 win over UNLV.

UNLV will begin Mountain West play next week with a trip to Fresno State, and they’ll be very happy to do so. This was UNLV’s second straight game against a ranked opponent, and those two teams combined to outscore the scarlet and gray, 85-13.

After Cameron Friel completed 1-of-4 passes in the first half for four yards, Marcus Arroyo spent most of the second half shuttling Friel and Tate Martell onto and off of the field sporadically. Friel finished the game 8-of-13 for 67 yards and an interception, while Martell connected on 2-of-6 for 26 yards.

As much as UNLV struggled on offense, the defense fared only slightly better. They managed to record two stops in the first half (one via a fumble recovery, the other on a goal-line stand), but Iowa State didn’t punt until 13 minutes remained in the fourth quarter. The Cyclones outgained UNLV on the night, 486-130.

UNLV is now 0-3 on the season, and depending on Doug Brumfield’s health it looks like this could be another long week of quarterback speculation for UNLV.

Iowa State put its second-team defense on the field and UNLV responded with a field-goal drive to get on the board and avoid the shutout. With 3:39 left in the third quarter, Iowa State leads 31-3.

Cameron Friel started the drive for UNLV and converted a couple of first downs through the air, then Tate Martell came in and picked up a first with his legs on a QB option. Together they moved the ball inside the Iowa State 10, but eventually got pushed back and had to settle for a 30-yard field goal from Daniel Gutierrez.

UNLV is going to lose this game, but the way Marcus Arroyo deploys his two quarterbacks over the final 18-plus minutes could tell us something about how he’s going to approach next week’s game at Fresno State.

Iowa State scored 10 points in the final two minutes of the half to take a 24-0 lead into the locker room.

Not only did UNLV not capitalize on the ISU fumble, quarterback Cameron Friel threw an interception to give the ball right back to Iowa State. The grateful Cyclones took over at the UNLV 29-yard line and three plays later Brock Purdy rolled right and hit Xavier Hutchinson in the back of the end zone for a 19-yard touchdown to make it 21-0 in favor of Iowa State.

Interestingly, Tate Martell was in at quarterback for UNLV to begin its second-to-last drive of the half, but stayed on the field for just one play before ceding to Friel. Two plays later Friel threw the damaging interception.

UNLV went 3-and-out on its ensuing possession as Friel took sacks on second and third down. That allowed Iowa State to get one more drive before halftime, and Purdy led the Cyclones into position for a 41-yard field goal as time expired to make it 24-0.

We’ll have to see if Martell gets a longer look at some point in the second half. This game is effectively over, and at halftime Friel has just four passing yards.

UNLV down 14-0 but driving late in half

UNLV just got its first break of the game.

Trailing, 14-0, with four minutes left in the half, an Iowa State turnover will give the UNLV offense a chance to chip into the deficit before halftime.

Iowa State quarterback Brock Purdy kept the ball on a designed run and was hit by UNLV cornerback Bryce Jackson; Jackson popped the ball out and UNLV recovered at its own 20.

Nothing has gone right for UNLV so far, but they’re somehow down only two touchdowns and looking at a chance to build some momentum. They’ll need to generate some offense here, however. To this point UNLV has gained just 25 yards of offense.

Iowa State jumps out to 14-0 lead over UNLV

UNLV won the opening coin toss. Things have been all downhill since then, and Iowa State has a 14-0 lead early in the second quarter.

UNLV chose to defer to the second half, a decision that came back to bite them when Iowa State took the opening kick and marched the length of the field for a touchdown. Superstar running back Breece Hall did the honors with a 1-yard scoring run to put the Cyclones up 7-0.

Cameron Friel then took the field as UNLV’s starting quarterback, but his first drive sputtered after picking up one first down (via a pass-interference penalty on a throw targeting Kyle Williams). After a punt, Iowa State went the distance again, and Hall punched in another 1-yard TD on the first play of the second quarter to make it 14-0.

As things stand now, UNLV has run six plays from scrimmage and is already trailing by two touchdowns. Unless Friel and the offense can string something together on this possession, things could get real ugly for the scarlet and gray.

Doug Brumfield out for UNLV

UNLV is currently on the field for pregame warmups, and quarterback Doug Brumfield is not in uniform. So who is going to play QB for the scarlet and gray tonight?

While Justin Rogers started the opener and came into last week’s game in relief of Brumfield, it looks like true freshman Cameron Friel is leading the position group through warmups. The Hawaii native has yet to take a snap at the college level, but he was an early enrollee and therefore went through spring practice, so he should be just a bit more seasoned than a normal freshman.

Brumfield made his first career start last week at Arizona State but was knocked out in the third quarter after taking a big hit.

With UNLV entering the game as a 32-point underdog to Iowa State, there is a good chance Marcus Arroyo will be dialing up pass plays in an effort to keep pace. Is Friel ready for that kind of responsibility?

UNLV football is 0-2, but the atmosphere inside Allegiant Stadium tonight should be electric for the scarlet and gray’s Week 3 matchup against Iowa State (7:30 p.m., CBS Sports Network).

Granted, the majority of spectators will likely be traveling fans of the No. 13 Cyclones (just the 10th ranked team to play UNLV in Las Vegas), so things could get confusing for UNLV players expecting a partisan home crowd. It will be up to head coach Marcus Arroyo to have his players prepared for that environment as they seek their first win since 2019.

This is becoming a weekly trend, as UNLV will once again head into a game with uncertainty looming over the quarterback position. Starter Doug Brumfield was knocked out of last week’s game at Arizona State and has been day-to-day this week, so we’ll have to wait and see if he’s under center for the first snap tonight.

If Brumfield can’t go (or gets forced out of the game again, something UNLV is desperately hoping to avoid), which backup will be first off the bench? Justin Rogers started the season opener and relieved Brumfield at ASU, but the offense has been completely ineffective with him at the helm. Cameron Friel is a true freshman, and high-profile transfer Tate Martell isn’t even listed on the depth chart.

Best case, Brumfield starts and finishes the game. If he can’t manage, it’s anyone’s guess as to who will take over against an elite Iowa State defense.

Iowa State is ranked No. 13 in the nation, and though the Cyclones are coming off a deflating loss to in-state rival Iowa last week they still possess one of the toughest defenses in the nation. In addition to being stingy against the pass (5.0 yards per attempt allowed, 19th in the nation) they rank sixth in the country in rush D, giving up a miniscule 1.7 yards per carry.

That’s not good news for the UNLV offensive line and running back Charles Williams, especially after they were dominated by Arizona State’s front last week (Williams picked up just 35 yards on 13 carries at ASU). Considering the issues at quarterback, UNLV is going to need much, much better production on the ground in order to be competitive with Iowa State.

If there’s one opponent weakness UNLV may be able to exploit, it’s Iowa State’s wobbly passing attack. Cyclones quarterback Brock Purdy has been bad this season, to the point where he was pulled from last week’s loss against Iowa (and there is now a QB controversy in Ames.

The scarlet and gray have been surprisingly competent in pass defense this season. Sophomore Nohl Williams appears to be developing into a legit cornerback (see his end-zone interception last week), and UNLV has already picked off three passes this season, already eclipsing last year’s total (two).

Purdy completed just 13-of-27 passes last week and tossed three interceptions. If UNLV can somehow force Iowa State into passing situations and make a play or two, they may be able to throw a scare into a ranked team for the second straight week.