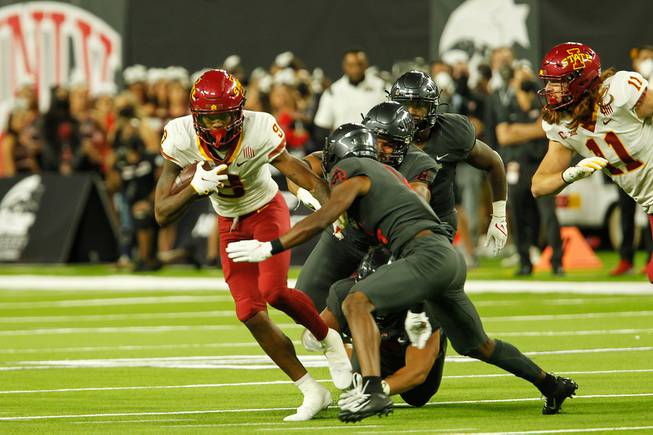 Iowa State’s Joe Scates (9) makes a run past UNLV’s defense in the fourth quarter of their game at Allegiant Stadium Saturday, Sept. 18, 2021. The Cyclones beat the Rebels 48-3. CHRISTOPHER DEVARGAS

UNLV’s matchup against No. 13 Iowa State was expected to be a rough one for the winless and rebuilding scarlet and gray, and Saturday night’s proceedings stuck to the script as the Cyclones rolled to a 48-3 victory at Allegiant Stadium.

Things turned bad before the game even got underway, as Iowa State fans flooded Allegiant (announced attendance of 35,193) and outnumbered UNLV fans at least four to one.

The opening minutes were particularly gruesome.

UNLV won the coin toss and deferred to the second half; Iowa State gladly received the opening kick and embarked on a 13-play touchdown drive. Superstar running back Breece Hall did the honors with a 1-yard scoring run to make it 7-0 in favor of the “visiting” team.

With Doug Brumfield out due to injury, freshman Cameron Friel got the nod at quarterback to start the game. On UNLV’s first third-down attempt, the frenzied Iowa State contingent created so much noise that an offensive lineman jumped out of his stance and was called for a false start.

After a UNLV punt, Iowa State took possession and marched the length of the field, topped off by another Hall 1-yard plunge to make it 14-0 early in the second quarter.

At that point in the game the Cyclones had outgained UNLV, 161-9.

Friel picked up his first completion on UNLV’s next drive, a short pass that eventually set up a 4th-and-1 at midfield. Friel handed off to Charles Williams, and Iowa State stuffed him behind the line for a turnover on downs. (Iowa State came into the game allowing 1.7 yards per rush, making them the sixth-best run defense in the nation.)

Midway through the second quarter, heralded transfer Tate Martell came in to spell Friel for one play. Martell handed off, then went back to the sideline. Friel threw an interception two plays later, and the Cyclones immediately cashed in with a 19-yard touchdown pass from Brock Purdy to Xavier Hutchinson to push their lead to 21-0.

UNLV seemed to catch a break on Iowa State’s next possession, when they somehow managed to stop Hall at the goal line on fourth down with two minutes left in the half. But the offense was completely backed up, and UNLV ran the ball three times before punting it back to midfield. Iowa State quickly moved into field-goal range and kicked a 41-yarder just before the half to make it 24-0.

It was all academic from there, with the only remaining intrigue being Martell’s usage. Head coach Marcus Arroyo shuttled his quarterbacks in and out of the game for most of the second half; Friel ended up completing 8-of-13 passes for 67 yard and Martell hit on 2-of-6 for 27 yards.

After the game Arroyo said the team had practiced all week with Friel and Martell swapping places, with certain offensive packages tailored to each QB’s skill set.

“The rotation was planned,” Arroyo said. “Never easy to do. My hat’s off to those guys for the week that they put in.”

UNLV has now fielded four quarterbacks through the first three games and there is still no evident answer at the position. Brumfield is injured, Justin Rogers dropped to the bottom of the depth chart due to ineffectiveness, and neither Friel nor Martell could get much of anything going against Iowa State’s elite defensive unit.

For the season, UNLV passers have completed 29-of-61 passes for 301 yards. That works out to a measly 4.9 yards per attempt.

Tight end Giovanni Fauolo caught passes from both Friel and Martell and said he believes any of the team’s quarterbacks are capable of running the offense.

UNLV is now 0-3 on the season and 0-9 under Arroyo. The scarlet and gray will try to break that streak next week when they head to Fresno State for a Friday night game against the 3-1 Bulldogs.

Whoever ends up taking the snaps, Arroyo said it will be up to the coaches to come up with a way to maximize UNLV’s available roster of quarterbacks.