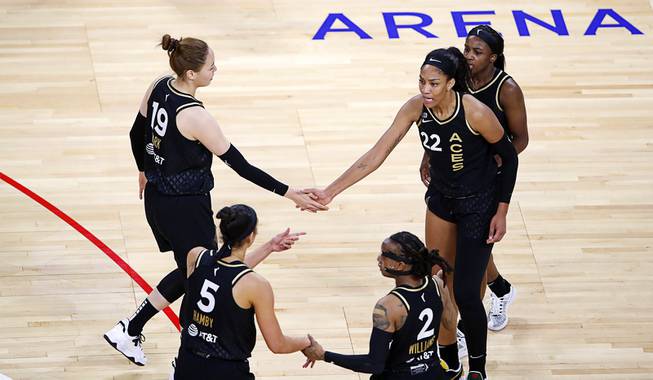 Las Vegas Aces players congratulate Las Vegas Aces forward A’ja Wilson (22) after Wilson made a basket and drew a foul during the Aces’ home opener against the Los Angeles Sparks at the Mandalay Bay Events Center Friday, May 21, 2021.

The Las Vegas Aces have been on an upward trajectory ever since the franchise moved to Nevada and hired coach Bill Laimbeer. From a 14-20 record in Year 1 that more than doubled the win total of the team’s final season as the San Antonio Stars, to back-to-back-to-back playoff berths, the Aces find themselves now as a favorite to win the WNBA championship Here are seven reasons that is within their reach:

1. Half the work is already done

The top eight teams qualify for the WNBA playoffs, but by virtue of their 24-8 record, the Aces earned the No. 2 seed—and a double bye directly into the semifinal round.

Skipping over the first two rounds of the playoffs is a distinct advantage, especially because those rounds are single-elimination games. Las Vegas will avoid those landmines and move straight to the best-of-five semis, where one bad shooting game or unlucky bounce won’t doom their entire season.

Laimbeer doesn’t want his team to be satisfied with the second seed, however. “I think we did what we were supposed to do,” Laimbeer says. “We haven’t won anything yet. We know where we’re at; we know what’s in front of us; we know how much hard work is still to be put in.”

After last year’s run to the finals, Las Vegas is sufficiently experienced to win it all. Young supporting players like Dearica Hamby and Jackie Young have plenty of postseason games under their belts now, and superstar A’ja Wilson—who led her South Carolina squad to an NCAA title in 2017—proved last year she’s capable of being the No. 1 option on a title-caliber team.

The roster includes four Olympic gold medalists and three college champions, and the Aces have played 13 postseason games in the past two years. They’ve seen it all—except a WNBA championship.

3. Getting right at the right time

It’s been a trying year for center Liz Cambage, as she opted out of the WNBA bubble last summer and withdrew from the 2021 Olympics for mental health reasons. And most recently, a COVID-19 diagnosis forced her to miss five contests.

Cambage was cleared to return for a tune-up in the final regular-season game, and another week off for recovery should help her get back to top form (again, the double bye comes in handy).

“The girls really held it down and locked in that second spot,” Cambage says. “That’s really going to help me get back into it. They need a break, but I need to turn it up, and we all know that. They’ll get their rest, and I’ll come catch up with them after a hard week on court.”

When Cambage has been on the floor she’s been as good as ever, averaging 14.7 points and 8.4 rebounds while shooting 54.5% from the field in 24 games.

The Aces signed veteran point guard Chelsea Gray in the offseason to bring a steady, championship presence to the backcourt, and the addition has proven to be excellent. Gray averaged 11.1 points and 5.9 assists in the regular season, and maybe more importantly, she helped bring out the best in third-year guard Jackie Young.

Young, the No. 1 overall pick in 2019, set career highs in points (12.2 per game), assists (3.2), steals (1.1) and shooting percentage (50.5%), and together she and Gray have turned Las Vegas from a post-oriented half-court offense into one of the fastest, most dynamic attacks in the league.

When healthy and firing on all cylinders, these Aces might have the best offense in WNBA history. They led the league in points per game (89.3), field goal percentage (47.2%), points in the paint (41.4) and offensive rating (109.0), and the margins weren’t particularly close.

They were also the first team in league history to have seven players average in double figures (the previous high was five).

The only weak spot? Compared with other teams, the Aces are still reticent to shoot 3-pointers; they ranked dead last in long-range attempts (13.5 per game). But when they do take them, they make them at a high rate (37.5%, second-best in the league).

It’s hard to imagine any opponent slowing down this Aces attack over the course of an entire playoff series.

All five Aces starters averaged at least 10 points per game, and when Laimbeer looks down his bench, he can call on not one, but two reserves who also scored in double figures.

Forward Dearica Hamby is the two-time reigning Sixth Woman of the Year and had another sterling season, posting 11.6 points on 54.5% from the field. And guard Kelsey Plum has evolved into an absolute assassin off the bench, putting up 14.8 points per game (second on the team) while nailing 38.6% of her 3-pointers.

Plum, in particular, will head into the postseason on fire—she averaged 20 points over the final six games of the regular season.

Plum says the Aces are playing cohesive basketball. “We have a lot of trust in each other,” she says. “It’s been really cool to see the growth with everyone on this team and how it’s come together. It’s exciting that we’re clicking at the right time.”

When all else fails, the Aces have the best player in the league: A’ja Wilson. The reigning MVP had another monster campaign in 2021 (18.3 points, 9.3 rebounds, 3.1 assists), and it just feels like it’s time for her to cement herself as the face of the WNBA.

A championship would certainly do that.