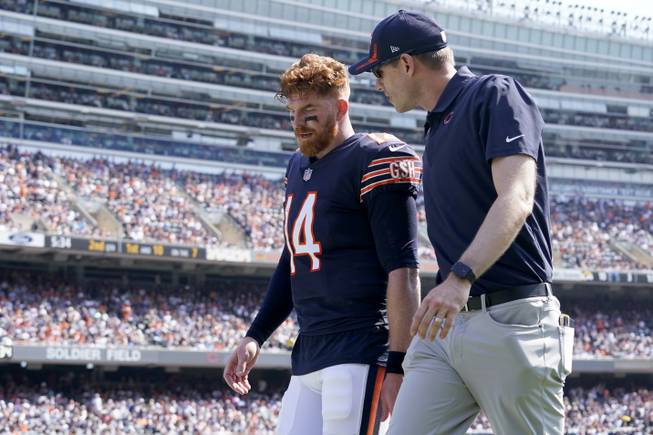 Chicago Bears quarterback Andy Dalton walks to the locker room with an unidentified trainer during the first half of an NFL football game against the Cincinnati Bengals Sunday, Sept. 19, 2021, in Chicago.

Accounting and adjusting for injuries annually ascends to the single most important aspect of handicapping the NFL at some point of the season.

It’s just not usually as early as Week 3. That’s how it feels this year, though, with a handful of quarterbacks and an even bigger number of other key players dealing with health setbacks after the first two weeks of the season.

Some gamblers will see all the uncertainty as a nuisance, but the best view it as opportunity. There’s no handbook or widely available number detailing every player’s worth to the point spread, leaving it to all bettors to ascertain the value themselves.

The ones who do it the best will be handsomely rewarded. I’ll give it my best shot on every game below, as I continue to pick every game against the spread.

Read below for picks of every Week 3 game, separated into three confidence categories and listed in rough order of confidence. Lines are the best currently available in Las Vegas on the chosen side.

Carolina Panthers -7.5 at Houston Texans The Panthers’ defense has been the NFL’s best by a significant margin through two weeks, and now gets to feast on a rookie third-round quarterback in Davis Mills. Combined with going up against a first-year coach in his first Thursday Night Football slot, this is a terrific spot for the Panthers where they should be laying double digits.

Los Angeles Rams +1.5 vs. Tampa Bay Buccaneers The opening spread, which had the favorite flipped, fit more in line with my number. The Rams have been the most impressive team in the league through two weeks, and barring injury, shouldn’t be a home underdog to any opponent — even the undefeated, defending Super Bowl champions.

Kansas City Chiefs -6.5 vs. Los Angeles Chargers Who would have ever thought the market would present a buy-low opportunity on the back-to-back AFC champions this early in the season? There’s still a sizable gap between Kansas City and the rest of the NFL in offensive EPA (expected points added) per play, which is more predictive going forward than a pair of disastrous defensive performances against two strong teams.

Minnesota Vikings +2 vs. Seattle Seahawks A missed field goal and a lost fumble away from 2-0, the Vikings are no ordinary 0-2 team. If either of result flipped the other way, it’s likely this game would be a pick’em — more in line with where it belongs.

Green Bay Packers +3.5 at San Francisco 49ers San Francisco’s offense was highly disappointing in a 17-11 win over the Eagles last week that was closer from an efficiency standpoint than the score indicated throughout. The 49ers’ defense is less of a question mark but it’s yet to encounter an offense with Green Bay’s ceiling, part of the reason this spread should be no higher than 3.

New England Patriots -2.5 vs. New Orleans Saints The market seemingly inching towards the Saints gives me pause, but perhaps it’s not weighting the fact that they’re playing practically their third straight road game and dealing with significant defensive injuries enough. The Patriots’ defense, meanwhile, looks more like the 2019 edition that swallowed up the league than last year’s mediocre unit.

Atlanta Falcons +3 at New York Giants The Giants aren’t being dinged enough by the market for cluster injuries along the offensive line, linebacking corps and secondary. The Falcons have been the NFL’s worst team through two weeks, but their priors weren’t that negative coming into the season to make some positive regression likely.

Cincinnati Bengals +3.5 at Pittsburgh Steelers The Steelers’ injury report might not be the NFL’s longest, but it just be the most significant. With T.J. Watt, Ben Roethlisberger, Joe Haden, Devin Bush and several more players potentially missing time, anything more than 3 against a younger, healthier team is a gift.

Chicago Bears +7.5 at Cleveland Browns Contrary to popular belief, Cleveland’s defense offers a soft landing spot for Chicago rookie quarterback Justin Fields’ first career start. The Browns rank 31st in the NFL in defensive EPA per play. The extra half-point comes close to making this a play, but it’s rapidly disappearing at sport book and +7 is a significant difference not nearly as appealing.

Las Vegas Raiders -4 vs. Miami Dolphins It sure sounds like this game is going to be a Derek Carr vs. Jacoby Brissett quarterback battle, which makes it a little easier to back the home team. But some caution may still be advised as the Dolphins are healthier overall and teams coming off lopsided losses like their 35-0 setback against the Bills last week are traditionally profitable investments the next week.

Dallas Cowboys -4 vs. Philadelphia Eagles Based on this season alone, this line is too high as Philadelphia has surprisingly been above-average in every area on a per-play basis. But the Eagles’ roster is still flawed and unproven and there’s a better chance they regress while the Cowboys should have the higher upside.

Indianapolis Colts +5.5 at Tennessee Titans If Carson Wentz plays, even on a pair of bum ankles, this line is undeniably inflated. It’s a tougher proposition with Jacob Eason making his debut under center, but I’m willing to gamble considering all statistical evidence indicates these two teams are evenly-matched.

Buffalo Bills -7.5 vs. Washington Football Team With edge-rusher Gregory Rousseau adding to what was already one of the NFL’s most talented defenses, the Bills are going to be increasingly difficult to score on. Washington quarterback Taylor Heinicke has performed better than expected in his brief starting career, but this defense will be the toughest he’s faced.

Jacksonville Jaguars +7.5 vs. Arizona Cardinals *Sighs.* The Jaguars might be this year’s objectively terrible team that continually costs me money. But with spreads this far-reaching, so be it. Arizona was a 2-point favorite in this spot coming into the season, and a 6-point favorite last week, making the current line reek of major overreaction to two games.

New York Jets +10.5 at Denver Broncos This is the same non-confident overreaction reasoning as the above game. The Broncos were an 8.5-point favorite here in last week’s lookahead line, and a 5.5-point favorite before the season, so a jump over 10 appears drastic no matter how poorly the Jets have played.

Baltimore Ravens -7.5 at Detroit Lions This number is perfectly fair, but it’s hard to shake memories of the Ravens regularly blowing out overmatched opponents. Over the past four seasons, they’ve gone 10-6 against the spread when laying a touchdown or more on the point spread.