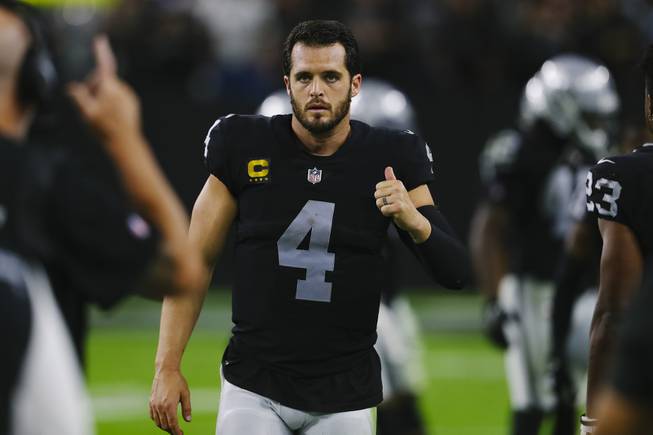 Las Vegas Raiders quarterback Derek Carr (4) stands on the field during overtime of an NFL football game against the Baltimore Ravens at Allegiant Stadium Monday, Sept. 13, 2021.

He was open to discuss his success in the Raiders’ 26-17 victory at the Steelers on Sunday, but only after giving requisite background information. Namely, he wanted to share that he wasn’t fully happy with his performance in a 33-27 overtime victory against the Ravens the week before.

That’s quite a harsh takeaway out of a game where the eighth-year veteran led a comeback by throwing for 435 yards, the highest total in any game by any quarterback this season, but it’s classic Carr. He’s a perfectionist when it comes to his play, one who’s heard a lot of negativity about it over the years but none that he says matches the criticism he personally reserves for himself.

If there was ever a chance to bask, now would be it. Carr leads the NFL in passing through two weeks with 817 yards and has become one of the hottest topics in the league. Shows have dedicated segments to ranking his place among the quarterback hierarchy and sports books have dropped his MVP odds to as low as 15-to-1.

But Carr’s got no time for such commendations. He wants the Raiders to focus on not only maintaining but surpassing the bar they’ve set with their 2-0 start, and believes he must originate the attitude.

“That’s something we’re trying to stay away from — the pats on the back,” he said. “Tell me what I did wrong, tell me what I can do better. Just keep that arrow going forward instead of settling.”

Carr’s mindset is one reason why his recent level of play appears sustainable, but it’s far from the only reason. Here’s the primary one: He’s already displayed this level of consistency over the past couple of seasons.

Sure, he’s never had as bulky of a yardage total in back-to-back games before, but from an efficiency standpoint, nothing he’s done so far this season in unprecedented. Coming into this season, he’s improved in each of his three years under coach Jon Gruden by QBR.

Other advanced metrics like expected points added per dropback or Football Outsiders’ DYAR paint a similar picture, unanimously ranking him as one of the better quarterbacks in the league since 2019. But the Raiders have performed mediocre overall, so Carr has gotten tagged as mediocre.

It’s never been all that fair and makes the sudden praise feel a long time coming for those within the organization.

“I just let his performance speak for itself,” Gruden said. “I’ve been clamoring for Derek Carr since I’ve been here, so hopefully he gets some recognition for what he did (against the Steelers). He had some long drives. He was big at the end of the game against two great defenses two weeks in a row, and he’s a big reason we’ve been able to win two games.”

If any doubt ever existed that teammates hold the same reverence as Gruden for Carr — and many have raised such suspicions over the years — a scene in the third quarter at Pittsburgh should have eliminated it. Carr went down and grasped for his ankle after throwing a nine-yard touchdown pass to tight end Foster Moreau.

Las Vegas’ celebration was cut short as the team emptied the bench to huddle around Carr. That response momentarily made the injury look much worse than it was.

“That’s an awesome quarterback,” Moreau said when asked about the play. “I love the guy to death. He was just letting me know like, ‘Hey go get (the touchdown).’ We know the play. We know the matchups and we’re just trying our best, but my mood definitely switched (when Carr went down), sunk down. Way down.”

Carr didn’t end up missing any snaps, and was arguably even better when he re-entered with a swollen ankle. That’s at least when one of the highlights of the year happened, a 61-yard touchdown heave to Henry Ruggs.

Deep passing is one area where Carr has been undeniably better so far this season. His average of 9 intended air yards per attempt, according to NFL Next Gen Stats, is a career-high and the aggressiveness has paid off with several long gains.

It must be a point of pride after he’s been accused of checking down to receivers on short routes too often in the past, but Carr has been careful not to indicate as much publicly. He’s deflected the credit.

Carr practiced in full on Wednesday, erasing some fear that his ankle injury could worsen and hold him out of Sunday’s Week 3 game at home against Miami. He said he’s treated it ever since the end of the win against the Steelers, going to exhaustive, secretive lengths to make sure he doesn’t miss any time.

The acclaim for Carr might be new, but his production isn’t.

“I still have to find a way to play at a high level regardless of what’s going on,” he said. “I don’t want or need a perfect situation, man. I just want guys that love football and will compete with me. That’s definitely something we have.”