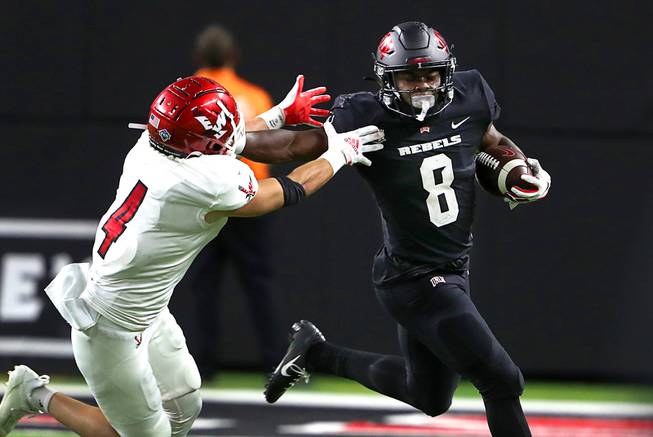 UNLV Rebels running back Charles Williams (8) fends off a tackle attempt by Eastern Washington Eagles defensive back Calin Criner (4) during the second half of an NCAA college football game at Allegiant Stadium Thursday, Sept. 2, 2021, in Las Vegas.

Talk about a lightning strike.

Doug Brumfield returned to lead the UNLV offense to start the second half, and his first play was a screen pass that wide receiver Tyleek Collins took 80 yards to the end zone. The long touchdown extended UNLV’s lead to 21-9, though Fresno State answered with a TD on its ensuing possession to make it 21-16 with 7:35 left in the third quarter.

UNLV has halftime lead at No. 22 Fresno State

Fresno State scored a touchdown in the final minute of the half to trim UNLV’s lead to 14-9 at the break, but the bigger concern is the status of Doug Brumfield.

UNLV’s starting quarterback has played well tonight, completing 5-of-10 passes for 63 yards and a touchdown, but he left the field with three minutes left in the half with an undisclosed injury. Cameron Friel led UNLV on its final drive of the half and went 3-and-out, giving Fresno a short field for its 2-minute drill. Bulldogs QB Jake Haener hit Erik Brooks for an 18-yard score with under a minute on the clock. The scarlet and gray defense turned away Fresno State’s 2-point conversion attempt.

UNLV should feel great about taking a lead into halftime on the road against the No. 22 team in the nation, but Brumfield’s injury makes it difficult. They will receive the kickoff to begin the second half, so let’s see if head coach Marcus Arroyo can game-plan a drive to get Friel into the swing of things.

Things were going just a little too well for UNLV.

Doug Brumfield just took a couple hard shots in succession and had to be taken to locker room following UNLV’s most recent possession. Freshman backup Cameron Friel is now in the game as UNLV looks to build on its 14-3 lead with 3:20 left in the half.

Friel started last week’s game against Iowa State and completed 8-of-13 passes for 67 yards, with no touchdowns and one interception.

The hope for UNLV is that the defense can continue to play well—they’re currently allowing just 4.6 yards per play—and Friel won’t be asked to do too much.

Could this be the night for UNLV football?

Charles Williams just scored a 1-yard touchdown, and suddenly UNLV finds itself with a 14-0 lead at Fresno State at the end of the first quarter.

Williams’s run capped off a 14-play, 95-yard drive that was aided by a pair of defensive penalties. UNLV has scored touchdowns on both of its possessions so far, as Doug Brumfield tossed a 10-yard touchdown pass to finish a 7-play, 60-yard drive earlier in the first.

Brumfield has 63 yards passing and 38 yards rushing, while Williams has 25 yards on seven carries.

The UNLV defense has done a good job getting off the field so far, but Fresno State just picked up a couple first downs and will begin the second quarter in UNLV territory.

UNLV couldn’t have asked for a better start tonight as the team looks to upset five-touchdown favorite Fresno State.

The scarlet and gray won the opening toss and deferred, and the defense came through by forcing a 3-and-out. Doug Brumfield then ran for 37 yards on UNLV’s first play from scrimmage, then finished off the drive by hitting Steve Jenkins for a 10-yard touchdown pass.

UNLV managed to force another punt on Fresno State’s ensuing drive, so Brumfield and the offense will take over with a chance to extend the lead. With 8:40 left in the first quarter, it’s UNLV 7, Fresno State 0.

Three keys for UNLV football at No. 22 Fresno State

UNLV will attempt to pick up its first win of the season at Fresno State tonight (7 p.m., CBS Sports Network), but it’s not going to be easy. The No. 22 Bulldogs are the third straight ranked opponent for UNLV, and the scarlet and gray have lost the previous two contests by a combined score of 85-13.

Can UNLV pull off the stunner and get its first victory since 2019? Three keys to watch:

UNLV’s run defense has allowed 5.6 yards per attempt this season, 112th in the nation, but it’s the passing game where Rivers can really hurt. Is UNLV’s reconfigured linebacking corps capable of keeping Rivers under wraps when he sneaks out of the backfield as a pass catcher?

UNLV is glad to have a healthy Doug Brumfield back under center after he missed last week’s game against Iowa State due to injury. The offense has looked competent with Brumfield, particularly the passing game—Brumfield, a sophomore, has averaged 6.8 yards per pass attempt, while the team’s other three QBs have managed just 3.5 yards per attempt.

The question now is whether Brumfield is capable of finishing a game. He only played in relief as a freshman, and he was knocked out of his first career start (at Arizona State) after taking a big hit outside the pocket. Head coach Marcus Arroyo wants Brumfield to play smart, stay upright and stay on the field for all four quarters.

Could this be the game that Charles Williams puts UNLV on his back and carries them across the finish line? The sixth-year senior (and Fresno native) has a long history of outstanding performances against FSU, as he has averaged 111.3 yards in four games against his hometown program.

The Chuck Wagon has been quiet since a big Week 1 showing, as he’s logged just 77 yards on 32 carries the last two weeks. UNLV is hoping he blows up in a big way tonight.