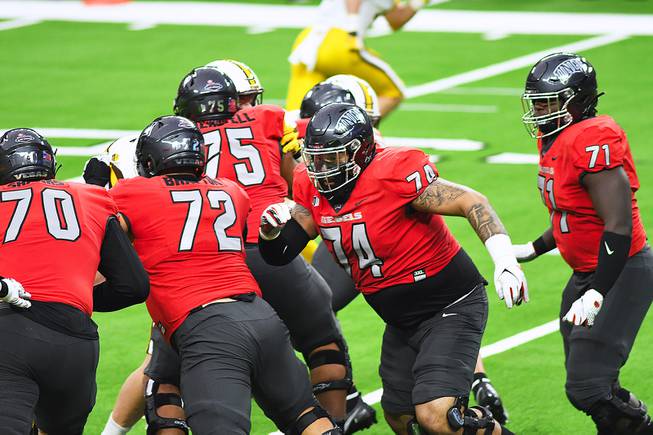 As an old football adage goes, the less you hear about the offensive line, the better.

Through the first three weeks of the season, the scarlet and gray blockers have made way too much noise. And that’s almost always a bad thing, as the quickest way for an offensive line to draw attention to itself is by getting running plays blown up and allowing sacks.

UNLV has the fifth-worst sack rate in the nation, as their quarterbacks have been walloped on 17.4% of dropbacks.

The team’s run-blocking has been nearly as hideous, as UNLV ballcarriers have averaged just 2.0 yards per attempt — the seventh-worst mark in the entire country.

It’s impossible to win without blocking the defense, and UNLV currently checks in at an appropriate 0-3 on the season as they head to No. 23 Fresno State for the Mountain West opener tonight.

What has gone so horribly wrong upfront?

It’s hard to pin the poor play of the offensive line entirely on recruiting. The program consistently fielded sturdy O-lines under previous coach Tony Sanchez, and two of the starters on this team (sophomore center Leif Fautanu and senior left guard Julio Garcia) were recruited to UNLV by Sanchez.

Current coach Marcus Arroyo brought in junior guard Daviyon McDaniel and senior left tackle Clayton Bradley as college transfers from Charleston Southern and USC, respectively, so youth can’t be used as an excuse. The only player along the line who is unseasoned is right tackle Tiger Shanks, a redshirt freshman who was recruited out of high school by Arroyo.

After UNLV quarterbacks were sacked three times on 22 dropbacks in a 48-3 loss to Iowa Sate, Arroyo said Shanks had a difficult time matching up physically and that it might take “a couple years” to catch up.

Asked about his team’s pass blocking to this point in the season, Arroyo said it’s a work in progress.

“A lot of room for growth,” Arroyo said. “We need to protect the quarterback and we got some 1-on-1 situations versus good opponents that are going to take technique, fundamentals and time, especially with guys who are new.”

On the ground, UNLV averaged just 1.3 yards on 31 rush attempts against Iowa State.

Arroyo hinted that he might shuffle the offensive line in an effort to create a more cohesive blocking unit.

“We pride ourselves on getting to be a physical program,” Arroyo said. “That’s going to be a big piece of what we do, our identity. So running the football is what we have to do. Gelling upfront and getting guys, mixing some positions upfront to see if we can get some more chemistry there upfront.”

Senior running back Charles Williams has seen a sharp decline in his production since Arroyo took over. In four years running behind Sanchez lines, Williams averaged 5.7 yards per carry, culminating in a 2019 campaign that saw him rack up 1,257 yards and earn All-Mountain West First Team honors. In two years under Arroyo, he has dropped to 4.3 yards per carry.

Williams said the team is trying to focus on the next nine games, not the three that have already been played.

“We work so hard and we haven’t gotten the outcome we want, but we’re working,” Williams said. “Most people would just be throwing in the towel. It’s kind of difficult to block the outside noise sometimes, but you have to.”

Blocking Fresno State isn’t going to be easy. The Bulldogs rank 31st nationally in run defense, giving up just 3.1 yards per rush, and they get after the quarterback to the tune of an 8.2% sack rate, good for 38th in the country.

The good news is, Williams has a history of strong performances against his hometown team. The Fresno native has recorded two of his 11 career 100-yard games against FSU, and he averages a healthy 5.7 yards per tote in four contests.

Arroyo believes establishing a formidable ground game will make life easier on the offensive line and the offense as a whole.

“We’re going to keep feeding Chuck,” Arroyo said. “Chuck is a workhorse for us. We believe in the run game, obviously.”