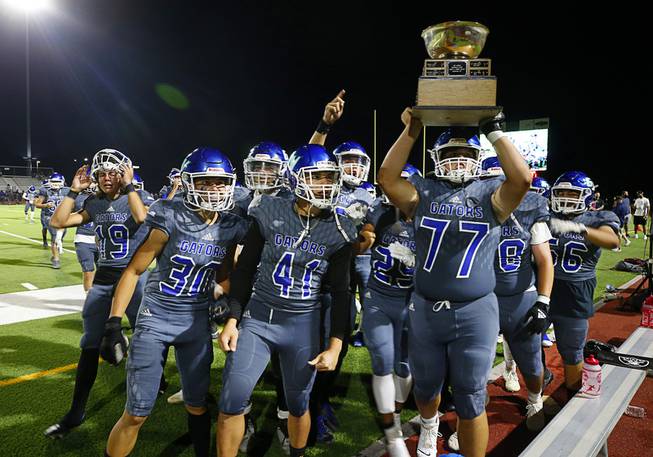 A few minutes after winning the Henderson Bowl rivalry game, players on the Green Valley football team gathered for a team photo in the middle of their home field.

They joyfully huddled around a homemade sign proclaiming them “Henderson Bowl Champs.”

It was a picture two years in the making.

The Gators’ 46-21 win over Basic in the annual game between Henderson’s oldest high schools was far from perfect, as there were miscues on special teams, fumbles, poor coverage in the secondary and a few penalties. But that couldn’t stain the excitement of the evening.

The 2020 edition of the game was canceled because of the pandemic, and players on both teams surely appreciated getting their chance to create a memory in a rivalry some have waited their entire careers to be part of.

“For our seniors, this was special,” Green Valley coach Brian Castro said. “Usually when you are a varsity football player, you get two opportunities in this game. Well, they got one. I am super proud of how they played.”

Jaylen McKnight had a pair of long touchdowns to lead the Green Valley offense, including breaking loose for a 68-yard scoring run in the fourth quarter to essentially seal the win after Basic had trimmed the deficit to 17 points.

McKnight, a senior, knew he had one — and only one — chance to be part of this game. He surely made the most of the opportunity.

“It was amazing. Not having a game last year really was a downer,” he said. “This is our history. This is a rivalry since way back when. We had to show out and do our best to have a good senior year.”

The pandemic shelved the entire fall and winter season in the Clark County School District during the 2020-21 school year. While games are back on this fall, it’s certainly not the same, as positive COVID cases have forced many programs to pause. It’s the same with every sport.

Having some normality with a postgame celebration was certainly a welcome interruption. Basic, who earlier this season had a game canceled because of protocols hours before kickoff, was also surely happy simply to be playing — even in defeat.

Green Valley trailed 7-6 after the first quarter, when on the quarter’s last play Damian Gramajo connected with Marcellus Moore for a long touchdown. Every time Green Valley tried to pull away, Basic answered.

“Basic shows up every year and plays hard,” Castro said. “Coach (Jeff) Cahill does a good job of getting them ready to play.”

Anton Keeling and Josiah Edwards had touchdown runs for Green Valley, and Jack Stevens connected with Nate Richter on a touchdown of more than 50 yards in the final seconds of the first half for a 26-7 advantage.