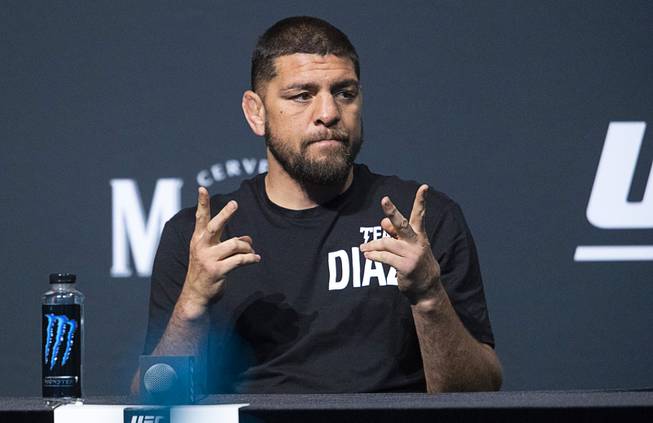 Nick Diaz is back, and not just his fighting.

The attitude that made Diaz a cult hero, and eventually a prizefighting superstar, is back. The unpredictability that accompanies every public appearance made by the now 38-year-old is back. The sideshow that’s just as entertaining as the actual competition is back.

Many fans, and even bettors, are indicating surprise with all the commotion Diaz has created going into his five-round pay-per-view fight against former champion Robbie Lawler in the most anticipated bout of Saturday night’s UFC 266 at T-Mobile Arena.

Mixed martial arts, and the UFC, has grown considerably since Diaz last fought six-and-a-half years ago. Those surprised by his antics must not have been around back then.

He may have taken it to an extreme in some respects this week, but for the most part, everything that’s happened in the last five days is classic Diaz.

A quick refresher: Diaz was contracted to fight Lawler at their traditional welterweight class. The 170-pound division is where they initially fought more than 17 years ago at Mandalay Bay Events Center. Diaz knocked out Lawler in the second round that night, on the undercard of the UFC 47 event headlined by the first fight between Chuck Liddell and Tito Ortiz.

But Diaz decided earlier this week he didn’t want to fight at welterweight anymore. He wanted the fight to be at middleweight, and he’s the rare fighter who has enough pull to strong-arm both the UFC and his opponent into a last-minute change, so the request was granted.

That raised some eyebrows, but what fully pulled them up was what happened when Diaz arrived in Las Vegas. He hasn’t looked as in shape as expected, and in a wide-ranging interview with ESPN, said he would have rather not returned to the octagon and shared that he resented the sport.

The betting market reacted swiftly. Money had come in on Diaz for months, making the fight a pick’em after Lawler opened around a -200 (risking $2 to win $1) favorite, but started drifting back the other way.

Lawler is now as high as a -160 favorite, and honestly, it might not be enough. The 39-year-old “Ruthless” doesn’t come into the fight with a great deal of momentum in his own right, having lost four straight and only won once since losing the welterweight title in 2016.

But he’s at least been active. He seems to have his mind and body in the right place going into UFC 266.

That’s more than can be said for Diaz, though it would be unwise to completely count him out. Again, the bizarre nature of his fight week is not unprecedented, so it shouldn’t be a total shock if he gives Lawler some trouble.

It would just probably be more of a shock than the odds are implying. The opening price of -200 might have been more fair, and there’s only one way to look as long as the price stays below that threshold.

Read below for a rundown and bets on four other UFC 266 fights.

The main event may not be getting the attention of Diaz’s featured bout, but it should turn out to be every bit as entertaining.

Riding a UFC-high 19-fight win streak, the featherweight champion Volkanovski is among the most complete fighters in the sport. Ortega has looked like he could be in the same conversation at his best, including an eye-opening unanimous-decision win over “The Korean Zombie” Chan Sung-Jung in his most recent fight.

Ortega is durable and should have a grappling advantage, but Volkanovski is in a class of his own on the feet. Before the victory over Jung — and Volkanovski’s controversial split-decision win over Max Holloway in his last fight — this line would have been at least 50% higher.

A discount on one of the best fighters in the world isn’t something to pass up.

If either of these veterans had another opponent, they might be fade candidates given their difficulties in getting to Las Vegas. But as it turns out, they both went through the same thing to neutralize any advantage.

Neither Hooker nor Haqparast could secure travel visas until the last minute and they both ended up arriving on Thursday with no time to spare ahead of weigh-ins.

Hooker, a 31-year-old from New Zealand, is the bigger name and more battle-tested fighter. But a number of wars over the last several years — including two straight losses to Michael Chandler and Dustin Poirier — may have taken their toll.

Haqparast, a 25-year-old from Germany, should be the fresher fighter with more upside going forward. This is a step up in competition for him, but he’s a technical striker who’s improved his defense enough that he should be able to avoid getting tagged by Hooker.

Daukaus is on a tear, having knocked out four straight opponents in the first round.

The 31-year-old may have been outmatched against the veteran Abdurakhimov a few years ago, but not anymore. Abdurakhimov now hasn’t fought in two years, and there are major questions regarding his return to the octagon at 40 years old.

The other heavyweight fight on the card, Curtis Blaydes vs. Jairzinho Rozenstruik on the pay-per-view, might be the one to watch from a quality standpoint, but this ESPNNews-televised preliminary is where to find value.

Daukaus has leveled up, and the market isn’t giving him enough credit.

Medic deserves to be put in the same exciting up-and-comer class as Daukaus after four straight first-round knockouts including over Aalon Cruz in his March UFC debut.

But his level of competition leaves much to be desired. Turner will be the best fighter he’s faced, and it’s not all that close.

Turner has endured an up-and-down three-year tenure with the UFC, but his last two performances have been among his best — back-to-back second-round stoppages over Josh Culibao and Brok Weaver.

Medic could catch Turner for a flash knockout, but the latter is more well-rounded and should have an advantage the longer the fight goes.