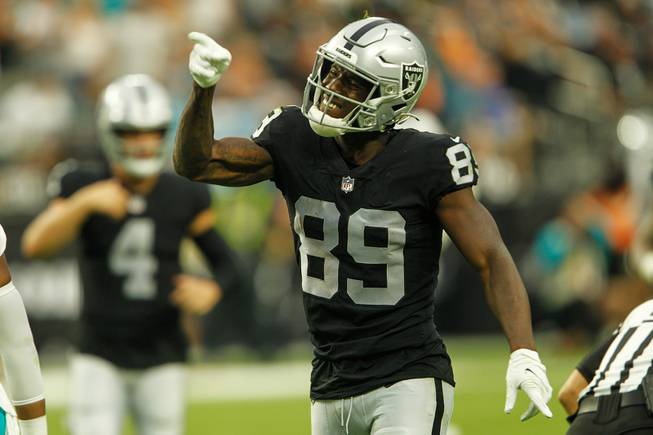 Las Vegas Raiders wide receiver Bryan Edwards (89) celebrates after a play during the overtime minutes of their game at Allegiant Stadium Sunday, Sept. 26, 2021. The Raiders beat the Dolphins 31 to 28 in overtime.

How did that happen?

Las Vegas notched its second overtime victory of the season, 31-28, over the Miami Dolphins, but the way the Raiders got there was a wild journey indeed.

The Raiders appeared to be sailing to a comfortable win after erasing an early 14-0 deficit, but the Dolphins scored the final 11 points of regulation—including a FitzMagic redux from backup quarterback Jacoby Brissett—to force an unlikely overtime period.

It was a wild ride, and one that probably didn’t have to go to overtime. But the bottom line is the Raiders are now 3-0 and in first place in the AFC West (tied with the Denver Broncos).

Derek Carr continued his excellent start to the season, but he had to work at it.

The day couldn’t have begun much worse for the Raiders quarterback. On the second drive of the game he tossed a pick-6 that wasn’t entirely his fault (tight end Foster Moreau appeared to cut in the opposite direction that Carr had anticipated). The next Raiders possession ended in their own territory when consecutive running plays were stuffed in the backfield on 3rd-and-1 and 4th-and-inches; Miami scored four plays later to make it 14-0.

Two possessions later, Carr once again moved the ball to the edge of the red zone before center Andre James fired a shotgun snap over his head on first down. Another potential scoring drive ended in a punt.

Carr kept pushing, though, and he eventually found his rhythm. A short touchdown to fullback Alec Ingold in the second quarter and a catch-and-run touchdown by Hunter Renfrow in the third quarter gave Las Vegas its first lead, 19-14, and Carr led another scoring drive (finished off by a Peyton Barber 1-yard TD run) to make it 25-14 early in the fourth quarter.

And when Miami came back to tie the game on the final play of regulation, Carr regrouped the offense and put points on the board in overtime. The Raiders won the toss and drove 60 yards to set up Daniel Carlson’s 38-yard go-ahead field goal; Carr was 2-of-4 for 48 yards on the drive. After Miami extended the game, Carr hit Bryan Edwards on a 34-yard corner route to help set up the winning field goal.

Despite the early struggles Carr finished 26-of-43 for 386 yards with two touchdowns and one interception. It was a class in not panicking, either early or late, and grinding out another close victory.

Jon Gruden stopped coaching this game with four minutes left in the fourth quarter, and it almost cost the Raiders a win.

Protecting a 25-18 lead, the Las Vegas defense forced Miami into a 4th-and-1 from midfield with 4:33 on the clock; Brissett attempted a QB sneak but was stuffed. At that point the Raiders players began to celebrate, and Gruden seemed to think that was that. On the Raiders’ ensuing possession, he called handoffs to Peyton Barber on first and second down as if the game were already decided. Both plays went nowhere, and Carr was sacked on third down. Las Vegas punted it right back to Brissett, who led Miami downfield for the game-tying touchdown and 2-point conversion with two seconds on the clock.

It’s not the first time Gruden has gotten too conservative in a big spot, and it won’t be the last. That’s just his nature. Taking his foot off the gas with so much time on the clock was inexcusable, except that Carr and the offense did excuse it by scoring twice in overtime.

Sometimes it’s better to be lucky than good, and you can’t argue with a 3-0 record.

Miami jumped out to a 14-0 lead thanks to a pick-6 and a short field after a Las Vegas turnover on downs—nothing that could be blamed on the defense. And Gus Bradley’s crew took over from there, shutting out the Dolphins until allowing a 46-yard field goal midway through the fourth quarter. By that time, Miami had gone scoreless on five straight possessions, allowing Las Vegas to put up 25 unanswered points to come all the way back and take control of the game.

The first big play came via offseason addition Casey Hayward. Miami tried to throw a wide-receiver screen while backed up at its own 1-yard line and the veteran cornerback pounced, tackling Jaylen Waddle in the end zone for a safety. That made it 14-2 and completely reversed the momentum of the game, which had been all Miami to that point.

And they got the huge stop on 4th-and-inches, stuffing Brissett behind the line to seemingly seal the game in the fourth quarter (or so Gruden thought). That was all really good.

But on Miami’s final drive, things came unglued. Brissett completed 7-of-9 passes for 50 yards to move the ball to the goal line, then scored on a 4th-and-goal scramble with two seconds left; his 2-point conversion pass to Will Fuller was good, and it was off to overtime.

After the Raiders put up three points on the first drive, Brissett threw three incomplete passes (sandwiched around a penalty) to put Miami in a 4th-and-20 situation. In a play reminiscent of the Ryan Fitzpatrick miracle/fiasco from last year, Brissett stepped up in the pocket and hit a wide-open Mike Gesicki for 27 yards and the ultra-long conversion.

To the credit of Gus Bradley’s defense, they did show some resolve in holding Miami to a field goal on that drive and giving Carr a chance to win the game. It’s fair to say that side of the ball is a work in progress, but still much improved over last year.