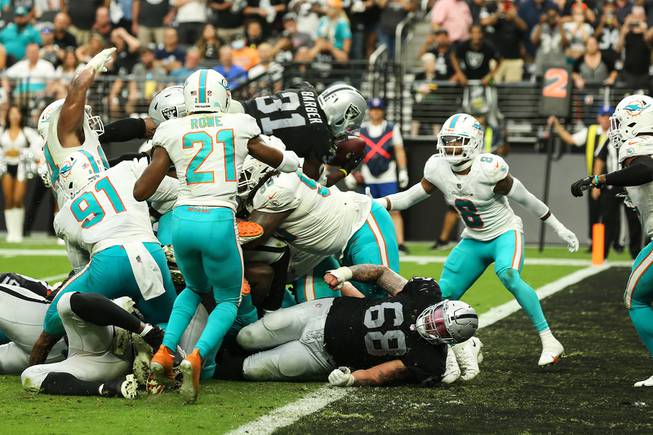 Las Vegas Raiders running back Peyton Barber (31) dives to score a touchdown against the Miami Dolphins in the fourth quarter of their game at Allegiant Stadium Sunday, Sept. 26, 2021. The Raiders beat the Dolphins 31 to 28 in overtime.

Derek Carr sat in the Raiders’ Allegiant Stadium locker room after a whirlwind 31-28 overtime victory against the Miami Dolphins on Sunday vocally going over his mistakes with Jon Gruden.

It’s part of Carr’s gameday process, but in his words, “so much chaos,” happened in Las Vegas’ latest victory that he was struggling to recall everything. Still, he tried — detailing missed throws and forgone opportunities before Gruden interrupted him.

The Raiders’ coach had heard enough.

It wasn’t flawless; heck, it was downright sloppy, but the Raiders persevered against the Dolphins to start a season 3-0 for the first time since 2002. And Las Vegas did it by winning the exact type of game it lost to Miami last year.

Foolish errors and untimely gaffes piled up in a similar fashion to the way they did to lead the Raiders to a last-second loss in December, but this time, they fought through them.

It was a victory for the “just win, baby” pantheon, a second-straight disorienting thriller since the Raiders opened their $2 billion stadium to fans.

Here’s the important thing sure to be lost in the recounting of all the swings of fortune and the analyzing of a win-probability chart that looks like a seismograph — The Raiders played more than well enough to get it done faster. Strictly from an efficiency standpoint, they might have played their best game of the year — putting up 497 total yards and averaging 6.1 yards per play to the Dolphins’ 330 and 4.2.

Renfrow said a whole lot of “self-inflicted” wounds kept things interesting, and that wasn’t just coach-speak. The box score clearly illustrates that the Raiders kept the Dolphins in the game more than the Dolphins kept themselves in it.

“I don’t apologize for winning games no matter how we won them,” Gruden said.

“There were some catastrophic plays today and you can write (them), you can list them.”

“We were lucky to overcome those,” Gruden said.

And, at least for those burdened by recent history, the Raiders seemed unlikely to overcome those mistakes. One reason they’ve been among the NFL’s losingest franchises over the last decade is because they often can’t find a way to finish close games.

But Las Vegas found a way against Miami, and it found it with a variety of players. The early comeback started when Casey Hayward continued to stake his claim as the NFL’s top cornerback early this season.

He allowed his first reception of the year, to Jaylen Waddle on a screen at the goal line but stuffed it in the end zone for a safety.

“Right before that play, I talked to (Trayvon Mullen) and said, ‘Somebody’s got to make a play,’” Hayward recalled. “It just happened to be me. I think it was a momentum-shifter. After that, we got it going.”

They got going largely behind their duo of second-year receivers as Brian Edwards and Henry Ruggs were their top two receivers, combining for seven catches for 168 yards. Ruggs made a leaping catch over Xavien Howard, whom Carr called the NFL’s top cornerback earlier in the week, as part of the Raiders’ first touchdown drive.

He flexed, yelled and jumped in celebration, emotion that’s typically out of character but was drawn out Sunday in part because Ruggs was motivated by a poor game against Howard last December.

“I had a little fire behind me in this game,” Ruggs said.

Barber eventually got ignited too. Filling in for the injured Josh Jacobs, who missed his second straight game, Barber ran for a career-high 111 yards and pulled in three catches for 31 yards.

Claimed off of the Washington Football Team practice squad just three weeks ago, Barber became a vital part of the Raiders’ offense and awoke their dormant running game.

Daniel Carlson’s game-winning 22-yard field goal as time expired in overtime was set up by four straight runs for 40 total yards from Barber.

“I hardly even know this guy, but I gave him a big smile and a game ball, I’ll tell you that,” Gruden said.

Like Carr, Barber had some plays he probably wished he could redo after the victory. He fumbled going into the end zone early in the game, but Ingold averted disaster by snatching the loose ball out of the air at the 1-yard line.

That was symbolic of the whole game. The Raiders continually came close to giving it away, but kept finding ways to stay afloat and ultimately did enough to win.

And the Allegiant Stadium crowd, for the second straight home game, got quite the unexpected, suspense-filled show out of it.

“I think they’re getting their money’s worth and I just don’t care,” Carr said. “I just want to win. So, if they see us win 40-0 and want to leave at halftime — I don’t think they will, hopefully they don’t, but I would much rather do it that way. But I am happy we’ve been able to pull out two overtime wins because what a great win for our city.”

‘UNLV getting a good one’ in Coronado lineman, high school coach says