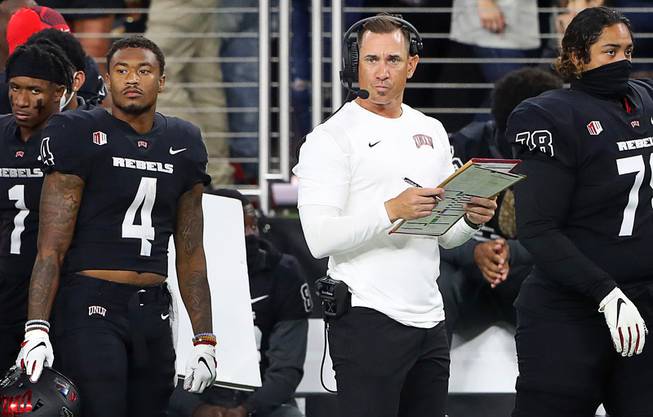 After close calls, UNLV hoping to break through for first win

In Marcus Arroyo’s first 10 games as head coach, UNLV football has lost all 10 contests by an average of 20.6 points.

The vast majority, obviously, have been blowouts. But while only two of those games were single-possession finals, they’ve both come this season as UNLV gets closer and closer to that first win under Arroyo. They went to double overtime in Week 1 before falling to Eastern Washington on a failed 2-point conversion, and they built a two-touchdown lead at Fresno State last week before ultimately losing, 38-30.

Arroyo is keenly aware of how close UNLV has come to landing that breakthrough win.

“When you say that cliché of it’s a game of inches — it is,” Arroyo said. “It’s eight points in the last one, and it’s one inch in the first one.”

When UNLV does finally secure its first win it’s probably not going to be a cruise to the finish line. It is more than likely to be decided by a razor-thin margin, and plays will have to be made in crunch time in order to come out on the right side.

How close is the program to making it happen?

In the Eastern Washington game, UNLV caught fire offensively down the stretch, scoring 14 points in the fourth quarter and reaching the end zone on both of its overtime possessions. The defense was unable to come through, however, allowing a long drive at the end of regulation that ended in a missed field goal by the Eagles; in OT, they let Eastern Washington score two touchdowns (on two plays) and a 2-point conversion.

At Fresno State on Friday the offense was the issue. UNLV struggled to move the ball after starting quarterback Doug Brumfield went out with an injury, as they averaged just 1.9 yards per rush in the second half and converted just 1-of-6 third downs. They also lost two fumbles.

If UNLV is going to finish off one of these games, those kinds of slumps can’t happen.

Arroyo believes his players can sense they’re getting close.

“When you get a chance to give guys feedback,” Arroyo said, “guys can see, wow, it really does come down to some plays where it’s one or two things away from breaking through.”

But while Arroyo obviously wants his team to execute when it matters most, he doesn’t want them to stress about it. He wants his guys to approach each play with the same energy and focus, whether it’s a 1st-and-10 on the opening drive or a 4th-and-goal with mere seconds left on the clock.

“You’ve got to be careful about overmagnifying the most critical moments of a game, because then they get anxious,” Arroyo said. “If I called a timeout and told [kicker Daniel Gutierrez], ‘Hey, I’m about to kick a 51-yard field goal and this is the biggest field goal of your life,’ that’s probably not a really good idea before he does it. In that fourth quarter [against Fresno State] with one drive to go score, we were smiling and exciting and looking at each other’s eyes and talking about how this is a four-minute drive that we’ve had in practice, just like we do in a 2-minute with two timeouts, and let’s go down and get it.”

UNLV will be a 21-point underdog on Saturday at UTSA. If the game is still up for grabs in the final minutes, it’s going to take a complete, error-free performance on both sides of the ball to pull it out. We’ll see if the scarlet and gray are up for it.