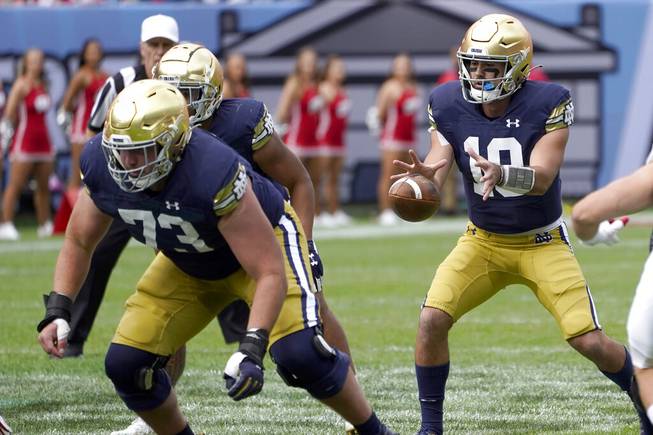 Notre Dame quarterback Drew Pyne taks a snap from center in the shotgun formation during the second half of an NCAA college football game against Wisconsin Saturday, Sept. 25, 2021, in Chicago. Notre Dame won 41-13.

BYU and Notre Dame will play each other at Allegiant Stadium in Las Vegas next season.

The Cougars and Fighting Irish said Tuesday they will play Oct. 8 in a Shamrock Series game for Notre Dame. This will be the eighth location Notre Dame has played one of its home games away from South Bend, Indiana.

This past week, the Irish had a Shamrock Series game against Wisconsin in Chicago. Notre Dame improved to 10-0 in series games. Fox Sports said the game with the Badgers drew 5.37 million viewers and was the most-watched college game of the weekend.

For BYU, the game with Notre Dame completes its schedule for 2022, which will be its last season as a football independent before joining the Big 12 in 2023.

Notre Dame leads the series with BYU 6-2. The teams last played in 2013 at Notre Dame Stadium.

After close calls, UNLV hoping to break through for first win