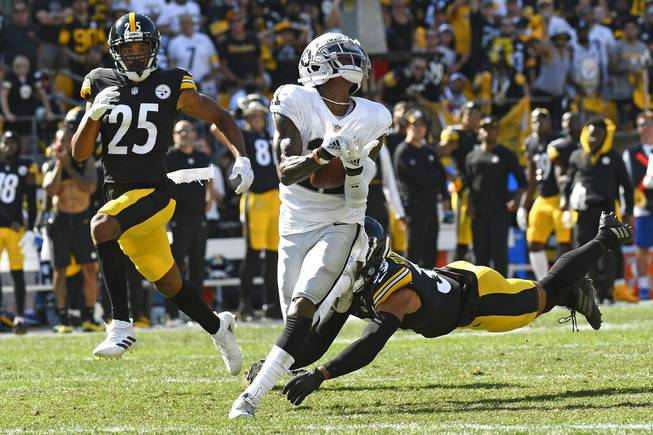 Las Vegas Raiders wide receiver Henry Ruggs III (11) hauls in a pass from quarterback Derek Carr between defenders Pittsburgh Steelers free safety Minkah Fitzpatrick (39) and cornerback Ahkello Witherspoon (25) and takes it for a touchdown during the second half of an NFL football game in Pittsburgh, Sunday, Sept. 19, 2021.

The Raiders took some heat for drafting Henry Ruggs 11th overall in 2020, making him the first receiver off the board ahead of highly rated prospects like CeeDee Lamb and Jerry Jeudy. But Jon Gruden had a specific role in mind to take the Las Vegas offense to the next level, and he felt Ruggs, with his top-end speed, was the man to execute it.

Last year it looked like it wasn’t going to work. Whether it was due to the pandemic-truncated offseason or a normal rookie learning curve (or a combination of both), Ruggs never clicked within the offense. Though he made a handful of big plays, such as his game-winning 46-yard touchdown catch in the final seconds against the New York Jets, he was mostly a non-factor.

The team continued to show trust in Ruggs throughout the offseason, however, and it’s paying off now. Through three weeks Ruggs is Las Vegas’ leading receiver with 237 yards, and just like Gruden envisioned, he is doing it via chunk plays, as he’s averaging 16.2 yards per target.

So how did Ruggs make the leap from rookie afterthought to game breaker in the span of one offseason?

Much of the credit has to go to Ruggs himself. He is still a young player working to absorb Gruden’s voluminous playbook, and he’s making tangible progress. Sunday’s overtime win over the Dolphins—in which Ruggs caught four passes for 78 yards—provided a good example of Ruggs learning in real time.

On the second play of the game, the Raiders ran a designed play to get the ball in Ruggs hands. Starting from the top of the formation, Ruggs goes in motion and uses his running start to launch into a wheel route up the left sideline. The play works, as Ruggs’ raw speed gets him wide open. The problem is, there is a safety coming over to cut off the deep route. Quarterback Derek Carr reads that and adjusts his throw, aiming a back-shoulder line drive to the sideline.

Ruggs doesn’t read the defense and continues flying straight upfield, into the coverage. The pass sails incomplete, and Carr showed some frustration after the play:

That’s a veteran quarterback understanding the action on the field, and a young receiver just relying on speed. But Ruggs figured it out.

In overtime, the Gruden dialed up the same play, again sending Ruggs in motion to set up a wheel route. The coverage is similar—the linebacker trailing Ruggs is rubbed at the line, again giving him a free run up the sideline—and this time Ruggs reads it the same as Carr.

With the safety approaching, Ruggs stops and adjusts to the back-shoulder throw, leaping and tapping his toes to secure a clutch 16-yard gain:

Give Ruggs props for making the in-game adjustment and nailing it the second time around. That’s a sign of maturity and development.

Carr noted as much after the game.

“He was trying to win with speed like he should, and I tried to throw it at him,” Carr said. “We came to the sideline and he said, ‘Hey I completely saw what you saw so if they do that again, I’ll be ready.’ And we ran that play again. Kind of a similar look, so he looked at me and we were able to hit that time. And so that’s just an in-game adjustment from a young receiver saying I saw what you saw and now just trust me, I’ll get it next time. And when I threw it, I thought I threw it to high he just went up and got it and made the play, but that stems from a in game adjustment of him coming up to me not freaking out.”

Another factor in Ruggs’ early breakout has been Gruden’s increased understanding of how to utilize his skill set. Ruggs is not a conventional receiver, so he’s not someone you want to line up on the outside and run a traditional route tree against cornerbacks all day. The Raiders still do this from time to time, like in the Miami game when they asked Ruggs to run a short out against man coverage:

A polished receiver with short-area quickness and elite footwork could get open on that play—someone like Davante Adams or Keenan Allen or Hunter Renfrow—but that’s not Ruggs’ bread and butter.

He’s had much more success working across the field horizontally, where he can use his speed to separate over longer distances.

On this play, Ruggs lines up in the right slot and releases down the seam before cutting across to the wide side of field. He gets a step on Miami cornerback Xavien Howard and is in position to make a catch and turn upfield for a huge gain.

The throw is off target; instead of leading Ruggs smoothly, Carr’s pass forces Ruggs to stop and leap for the catch, which he does, showcasing his athleticism by high-pointing the ball over one of the best corners in the league. The play still goes for a sizable gain of 23 yards:

Gruden is also mixing in more plays designed to get the ball to Ruggs with room to run. Here, Ruggs goes in motion and reverses course—boomerang motion—and gears up to full speed, giving him a step on the cornerback before the ball is even snapped.

At the snap, receiver Bryan Edwards rubs the defender tasked with covering the flat, clearing space for Ruggs to make a short catch and turn up the sideline for an easy 21 yards:

These are chunk plays, and now that Gruden is playing to Ruggs’ strengths and Ruggs is responding, they are coming more frequently.