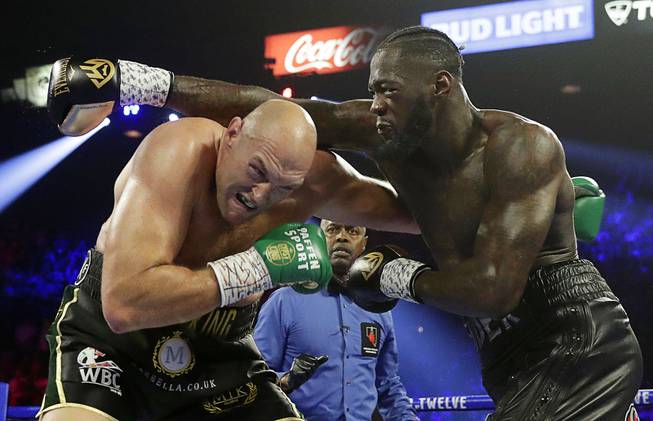 Deontay Wilder took a seat in front of the media, placed headphones over his ears and zoned out. At the lone pre-fight-week news conference to announce his upcoming WBC heavyweight championship trilogy bout against Tyson Fury on October 9 at T-Mobile Arena, Wilder had no interest in promoting the rivalry. After a brief address when he came out onstage, he ignored all questions, allowing his trainer, Malik Scott, to speak for him.

• PPV: $80 on Fox via television providers or ESPN+

“He’s very stubborn, even though he’s rededicated his life and everything to the craft,” Scott said of Wilder. “Like most legends or gifted people, he has his things with him. … As long as he gives me what I want in the gym, I don’t care about the stubbornness.”

Perhaps silence is the right choice for Wilder, given that he has talked exhaustively about Fury for the past year and a half, and for the most part, that has created nothing but trouble. After Fury won the second matchup between the two fighters via seventh-round TKO in February 2020 at MGM Grand Garden Arena, Wilder started offering a string of increasingly bizarre excuses for his subpar performance.

First, he blamed the blowout loss on a 40-pound suit he wore for his walkout to the ring, explaining that it tired out his legs. Wilder eventually veered into even more outlandish conspiracy theories, including that his own then-trainer Mark Breland had spiked his water bottle and that Fury had tampered with his gloves.

A great deal of mockery and ridicule followed the comments, including from Fury, who posted on his Instagram account a list of 26 excuses Wilder has used. Only about half of them—“Fury did voodoo magic,” for example—were embellished.

The way the 35-year-old former champion from Tuscaloosa, Alabama, responded to the first loss of his career has done considerable damage to his reputation. The fallout has added extra significance to the upcoming rematch with Fury: Wilder’s career might be winding down, and the way he performs could ultimately dictate how he’s remembered.

“Look, enough said, time to cut off his head,” Wilder said in his only public comments. “There will be bloodshed.”

Fury, the 33-year old “Gypsy King” originally from Manchester, England, laughed at Wilder’s antisocial routine and offered to role-play his opponent in interviews. “He said all this last time—decapitation, bloodshed and all that,” Fury joked. “And we all saw what happened there.”

Wilder was hailed as the knockout artist worthy of bringing heavyweight boxing back to mainstream prominence in America when he won his first major title in 2015. He mostly succeeded in that—but largely because he found a more than capable rival in Fury.

Wilder came in as a minus-200 favorite—risking $2 to win $1—when he first met Fury in December 2018 at LA’s Staples Center. Fury surprised many by outboxing and outlanding his opponent but had to settle for a split draw when Wilder scored a pair of knockdowns late in the fight.

“I gave my game plan away the first time, because he wasn’t good enough to do anything about it, and I’ll do the same thing this time, because he’s not good enough to do anything about it. Deontay Wilder is a one-trick pony. He’s got knockout power. We all know that, great,” Fury said. “But what I’m going to do to Deontay Wilder is, I’m going to run him over as if I’m an 18-wheeler and he’s a human being. And I guarantee you he doesn’t go past where he did before.”

Wilder was completely outclassed in last year’s rematch—which was priced as a pick’em in sports books—to the extent that most boxing fans hoped Fury would move on to a different opponent. After initially saying he would grant Wilder another shot, Fury recanted and all but announced a title unification bout against WBA/IBF/WBO champion Anthony Joshua.

But Wilder sued over a rematch clause in the second fight’s contract, which Fury claimed had expired, and an arbitration judge sided with the former.

“It was a crazy roller coaster of what was going to happen and not going to happen, but I’ve always said you’re never fighting someone until you’re in the ring opposite them,” Fury said. “So it wasn’t really hard for me. I wasn’t in training camp when all these negotiations were going on.”

Betting odds tab Fury as more than a minus-300 favorite for the trilogy match, and his father recently told BT Sport that his son’s goal is to beat Wilder into retirement. It wouldn’t be a shock if Wilder steps away from boxing win or lose, since he has recently used his success in the ring to explore other opportunities such as acting.

There’s no question he’s a star; Wilder vs. Fury II reportedly sold 1.2 million pay-per-views, with both fighters making $30 million base pay in addition to undisclosed sales bonuses. Wilder has lived up to his promise in generating long-dormant national interest in heavyweight boxing, but he might now need a victory against his biggest adversary to secure his place among the all-time greats.

“I hope he brings something different than he did last time,” Fury said. “He needs to, let’s face it. Let’s hope he can give me a challenge.”