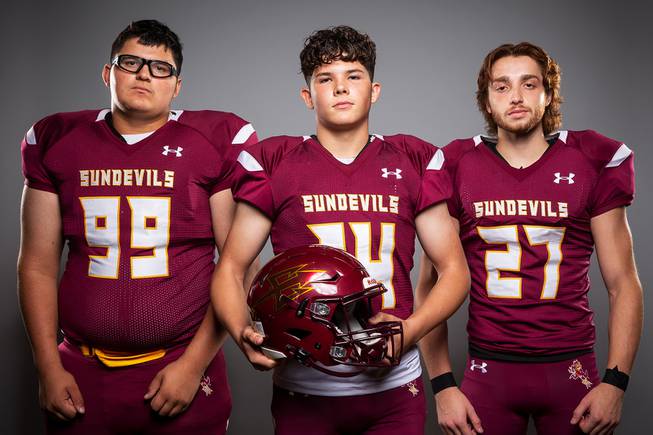 Members of the Eldorado High School football team are pictured during the Las Vegas Sun’s high school football media day at the Red Rock Resort on August 3rd, 2021. They include, from left, Misael Pelayo, Matthew Gallegos and Emilio Quiroga.

The Eldorado football team trailed by two touchdowns at the end of the first quarter tonight against visiting Boulder City.

Making matters worse: Boulder City was at the Eldorado 1-yard line with a first down play looking to build on the lead. But the Eldorado defense held strong in keeping Boulder City out of the end zone on four straight plays, giving the ball to the Sundevils offense to start the comeback.

Matthew Gallegos wound up scoring on two short runs, and Eldorado shocked Boulder City with a 15-14 win in a class 3A league game.

Eldorado botched the snap on the point after kick following the second score, but Gallegos scooped up the loose ball and connected with Marcus Reynolds for the 2-point conversion for the winning points.

“The defense stepped up and won the game for us,” Eldorado coach BJ Jackson said.

So did the offensive line, which was vital in a 16-play drive in the fourth quarter than drained the clock. Boulder City never touched the ball in the final 12 minutes, Jackson said.

“The kids are starting to realize they have what it takes. They understand you have to fight until the end.”

Xavier Delgado had a 70-yard reception from Gallegos to bring the ball to the Boulder City 1-yard line on Eldorado’s initial touchdown.