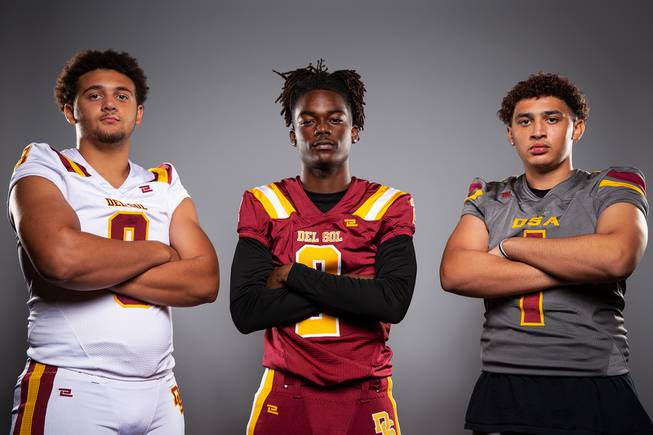 Members of the Del Sol Academy football team are pictured during the Las Vegas Sun’s high school football media day at the Red Rock Resort on August 3rd, 2021. They include, from left, Chaz, Vonta Halloway and Michael Brown.

Michael Brown and Jauhmeir Pink had short rushing touchdowns in the second half tonight for the visiting Del Sol football team in a 14-7 win over Western for the Dragons’ first victory of the season.

The bus ride back to campus featured plenty of laughter and singing in celebration.

“The kids were excited after the game, as you could imagine,” Del Sol coach Clint DuBose said.

Del Sol trailed 7-6 midway through the fourth quarter and scored the winning points with 5:30 remaining. After a defensive stop, they took a knee in victory formation to seal the win.

“You are holding your breath waiting for them to run the clock down,” DeBose jokingly said.

Alejado, Stockham pass for two touchdowns each in Gorman win