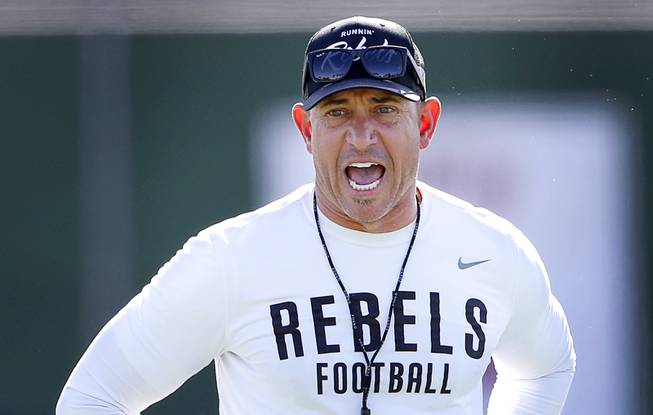 UNLV’s comeback attempt came up short as UTSA held on for a 24-17 win at the Alamodome.

After Justin Rogers’ touchdown pass kept the scarlet and gray alive, UTSA drove to the UNLV 28 but missed a game-sealing 45-yard field goal with 1:34 remaining. Cameron Friel came back onto the field and immediately hit passes to Zyell Griffin and Steve Jenkins for 16 yards apiece, moving the ball into UTSA territory.

Three straight incompletions followed, setting up a 4th-and-10 from the 41-yard line. Friel dropped back but the pressure was immediate, and he was brought down by Clarence Hicks for a loss of 19 yards and a turnover on downs. Friel was sacked six times on the day.

Friel finished 25-of-37 for 307 yards, with one touchdown and two interceptions. He also lost a fumble, but despite the turnovers it was by far the best performance turned in by a UNLV quarterback so far this season.

UNLV is now 0-5 on the season and will have a bye week before hosting Utah State at Allegiant Stadium on Oct. 16.

UNLV attempting comeback, down 24-17 at UTSA

UNLV isn’t out of this one yet.

Justin Rogers just made an emergency appearance and threw a touchdown on 4th-and-inches to pull UNLV within 24-17 with six minutes on the clock. If the defense can manage to get a stop, the scarlet and gray could have an opportunity to steal their first victory under Marcus Arroyo.

Starting QB Cameron Friel was injured on the previous play, as a planned sneak went awry due to a fumbled snap. Friel dove into the pile to attempt to recover the ball and had to come out of the game. Rogers stepped in and delivered under duress; the UTSA pass rush chased him out of the pocket, but Rogers remained calm, rolled right and hit Zyell Griffin for a 9-yard TD.

UTSA pulling away from UNLV in fourth quarter

Things are starting to get away from UNLV, as UTSA has a 24-10 lead and will enter the fourth quarter on the doorstep of another score.

Frank Harris hit De’Corian Clark with a 31-yard touchdown pass late in the third quarter to give UTSA a two-score cushion, and disaster struck for UNLV shortly thereafter. Cameron Friel was chased out of the pocket and, perhaps trying to do too much, was sacked and stripped. UTSA recovered deep in UNLV territory, and they’ll have a 2nd-and-8 from the UNLV 9-yard line when the fourth quarter begins.

Friel has mostly looked good throwing the ball today, hitting on 16-of-22 passes, but turnovers have hurt him. He was intercepted (for the second time) to set up UTSA’s last scoring drive, and his fumble may have slammed the door on UNLV’s upset bid. Friel has been sacked five times on 27 dropbacks.

After back to back fourth-down stops UNLV will have the ball at midfield, down 17-10 with 5:53 left in the third quarter.

UNLV got the ball into the red zone on its last possession, but a 4th-and-1 screen pass to Kyle Williams was stopped cold at the line of scrimmage. UTSA took over at its own 19 and quickly drove to midfield before being faced with its own fourth-down decision. Needing to gain a yard, the Roadrunners handed the ball to Sincere McCormick and the UNLV defense swarmed, bringing him down short of the line to gain.

UNLV has had trouble running the ball today (49 yards, 2.9 per carry) and has had to rely on the arm of freshman Cameron Friel (15-of-20, 203 yards, one touchdown, one interception). If they’re faced with another 4th-and-inches, however, it might make more sense to hand the ball to Charles Williams or Chad Magyar.

Cameron Friel’s hot streak came to an end, and UNLV finds itself trailing UTSA at the half, 17-10.

UNLV was faced with a 3rd-and-20 from its own 40-yard line late in the second quarter, and Friel threw an ill-advised pass into traffic even though the intended receiver was well short of the line to gain. A UTSA defender picked it off and the Roadrunners began their next possession in UNLV territory.

Quarterback Frank Harris quickly led UTSA inside the 5, and after converting a 4th-and-inches Sincere McCormick plowed in from the 1-yard line to put the Roadrunners ahead with 21 seconds left in the half.

UNLV will get the ball to start the second half. We’ve seen UNLV hang around in several games this season only to completely fall apart over the final 30 minutes, so it will be important for Friel to shake off the interception and put some points on the board.

Cameron Friel is having himself a day. The freshman has hit on 7-of-8 passes for 130 yards and a touchdown, and UNLV is tied with UTSA, 10-10, with less than seven minutes left in the first half.

Friel almost led UNLV the length the field on the last possession, starting with a clutch completion from his own end zone to Steve Jenkins for 18 yards. The drive ended inside the red zone, however, when Friel was sacked on third down. Daniel Gutierrez kicked a 34-yard field goal to put UNLV up, 10-7.

UTSA threatened on its ensuing drive but UNLV stiffened up on the goal line (aided by a UTSA false start). On third down, cornerback Cameron Oliver nearly had an interception on the sideline, but a UTSA receiver closed late and pushed Oliver out of bounds before he could make the pick. The Roadrunners settled for a game-tying field goal.

UNLV has flipped the script after a rocky start, and at the end of the first quarter this game is tied, 7-7.

Marcus Arroyo did decide to stick with Cameron Friel for another drive, and the freshman rewarded his faith. On the first play of UNLV’s second possession, Friel spotted Steve Jenkins running behind the defense and hit him in stride for a 63-yard touchdown to tie the game.

The scarlet and gray have got some momentum now. The defense forced a punt on UTSA’s ensuing possession, and after taking over on the goal line, Friel and Jenkins hooked up again for 18 yards and Charles Williams broke off a 14-yard run to get UNLV back near midfield. They’ll have a 1st-and-10 at the 47 to open the second quarter.

Cameron Friel started at quarterback for UNLV, but let’s see how long he’ll last. After one drive—which resulted in a punt—backup Justin Rogers began warming up on the sideline.

Friel managed to move UNLV past midfield on his one possession at the helm, completing 2-of-3 passes for 19 yards, but when faced with a 3rd-and-12 from the UTSA 46 he took a sack. It was the eighth sack for Friel on 39 dropbacks this season.

After UNLV’s punt, UTSA drove 92 yards and took a 7-0 lead on a 9-yard touchdown pass from Frank Harris to Joshua Cephus.

It looks like Friel will come back out to lead the offense on its second drive, but the leash can’t be very long.

No Brumfield for UNLV, Friel to start at QB

Pregame warmups delivered some unsurprising but still disappointing news for UNLV, as starting quarterback Doug Brumfield did not take the field.

Brumfield, a sophomore who has started two games this season, reaggravated a knee injury last week at Fresno State and has not practiced since. In his absence it looks like freshman Cameron Friel will once again get the nod under center; Friel started against Iowa State two weeks ago and worked in relief after Brumfield was forced out against Fresno State.

Friel has hit on 17-of-28 passes this year for 205 yards, with no touchdowns and one interception. The true frosh has struggled most with pocket presence, taking seven sacks on 35 dropbacks, so it will be vital that the offensive line gives him plenty of space to operate.

Justin Rogers and freshman Matthew Geeting were the other quarterbacks who participated in early on-field warmups. Rogers would appear to be the No. 2 QB today; Geeting has not played yet this season, but seems to have been elevated to No. 3 on the depth chart while Tate Martell continues to work his way back from injury.

QB carousel expected to continue when UNLV takes on UTSA

Eight days after turning in their best performance of the season in a 38-30 loss at Fresno State, the still winless UNLV football team is once again hitting the road, venturing to the Lone Star State to take on UTSA at the Alamodome (3 p.m., ESPN+).

The last time UNLV had a quarterback start every game of a full season — no, Max Gilliam’s six-game run last year doesn’t count — was 1996, when Jon Denton took the first snap in all 12 contests. That long, long streak of instability will continue this season, as the scarlet and gray have already used three different starting QBs. But they’ve somehow taken the carousel to the next level, as head coach Marcus Arroyo can’t even find a quarterback to play an entire game.

UNLV has used at least two passers in each game this season, either due to injury or ineffectiveness, and four different quarterbacks have seen the field. The best option has been sophomore Doug Brumfield (17-of-39, 320 yards, two touchdowns, one interception), but recurring injuries have knocked him out of both his starts, including a knee issue that forced him out of the Fresno State game.

Brumfield didn’t practice this week, ceding first-team reps to freshman Cameron Friel. If Friel gets the start at UTSA, as expected, Arroyo will have to carefully craft his offensive game plan to take advantage of Friel’s strengths and limit his weaknesses.

Last week, Friel came on in relief of Brumfield and hit 9-of-15 passes for 138 yards, but he took four sacks. Getting the ball out quickly — and maybe getting Friel through the whole game — will be the top priority.

For the second time in three weeks the scarlet and gray are going up against one of the elite run defenses in the country. Iowa State is ranked sixth nationally, allowing 2.3 yards per carry, and UNLV was completely stuffed in that Week 2 contest as their running backs gained just 49 yards on 23 carries.

UTSA is just as stout up front, allowing 2.5 yards per carry, but there’s reason to believe UNLV might have a shot at moving the ball on the ground. They had some success last week against Fresno State (another solid run defending team at 3.4 yards per carry), especially senior Charles Williams, who racked up 102 yards and a touchdown on 19 carries.

UNLV’s pass protection has been a mess all season, but the run blocking has looked good in spurts. If they can open up a few holes against the UTSA front, it will take a lot of pressure off Friel.

For the fourth week in a row UNLV’s defensive front is going to be challenged by one of the elite running backs in the country. And so far, the scarlet and gray have actually done a decent job of holding up against that onslaught.

Not a great job, mind you, but decent considering the opponents. First it was Arizona State back Rachaad White, who was held somewhat in check (22 carries, 90 yards, two touchdowns). Then it was Iowa State’s Breece Hall, who churned out 100 yards and two touchdowns on 21 carries. Last week, Fresno State star Ronnie Rivers posted just 48 yards on 14 carries. Arroyo will probably take those numbers.