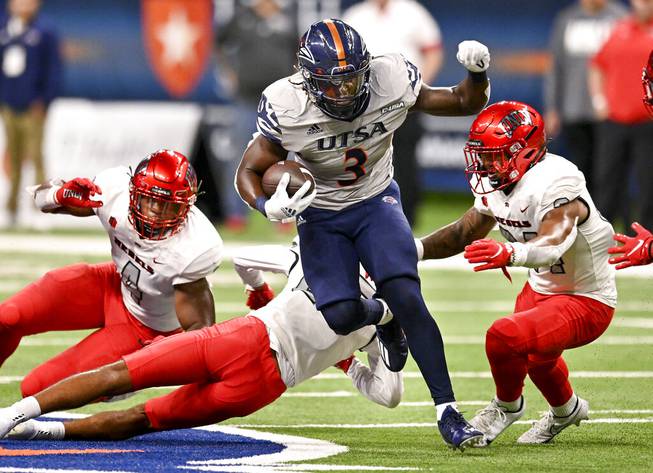 This one felt different.

Sure, UNLV has lost all of their games since Marcus Arroyo took over as head coach last year, but Saturday’s 24-17 defeat at UTSA was not like the others. It was a game UNLV could have—and perhaps even should have—won.

That’s what had Arroyo so frustrated after the loss, as he blasted his players’ lack of discipline and criticized their propensity to commit penalties at the worst times.

So yeah, the whole “moral victory” vibe that that the team had been trying to cultivate through an 0-4 start? That’s gone. In its place is now a hardened, bitter 0-5 malignancy.

“I don’t need stats,” Arroyo said. “That was our most undisciplined game. We beat ourselves in a lot of ways.”

That point is inarguable, as UNLV blundered away the game on both sides of the ball.

Freshman quarterback Cameron Friel was thrust into the starting role due to Doug Brumfield’s knee injury and performed admirably, but he was sacked six times. He threw two interceptions and lost a fumble. The defense jumped offsides on a crucial 4th-and-1 late in the game, handing UTSA a first down and allowing the Roadrunners to burn more time off the clock.

And left guard Julio Garcia, a sixth-year senior with 19 career starts, was ejected in the fourth quarter after getting flagged for a second unsportsmanlike conduct penalty.

All the errors added up, but Garcia’s absence came back to haunt the scarlet and gray in an especially big way.

After UTSA missed a 45-yard field goal that would have sealed the game, UNLV had one final chance to tie or win. Friel and the offense took the field with 1:34 on the clock and drove past midfield with ease. Three straight incomplete passes set up a 4th-and-10, however, and UTSA called its final timeout to set its defense.

On fourth down, Friel dropped back but was immediately besieged by the UTSA pass rush. He was sacked for a 9-yard loss, ending the game.

Would Garcia’s veteran presence have made a difference on the final play? Could he have perhaps given Friel a bit more time to find a receiver downfield?

Arroyo seemed to think so, and he didn’t hold back in addressing Garcia’s ejection.

“We put ourselves in a position to hurt us and let the emotions of the game get to us,” Arroyo said. “That’s the first time I’ve seen that with this group since we’ve been here. We’re going to cut that out like cancer. That hasn’t been part of what we’ve done. That will be eliminated.”

UNLV did not make any players available to the media after the game.

Arroyo and his squad will have a long time to think about the one that got away, as they’ll have a bye this weekend and won’t take the field again until hosting Utah State on Oct. 16.

The next 13 days should tell us a lot about the UNLV football program under Arroyo’s leadership. As it turns out, holding a team together might be easier after a blowout loss than after squandering a winnable contest—especially when the team is as starved for victory as this one is.

“When you lose your composure and you’ve got penalties and you’re playing an undisciplined football game in a fashion that you haven’t played before, you limit your success,” Arroyo said. “We know what it takes to win a football game, in regards to what we’ve done here as a staff and what we’ve done in the past. We know what wins football games. We’re right there in some of these games but this one here, we took ourselves out of a lot of situations.”