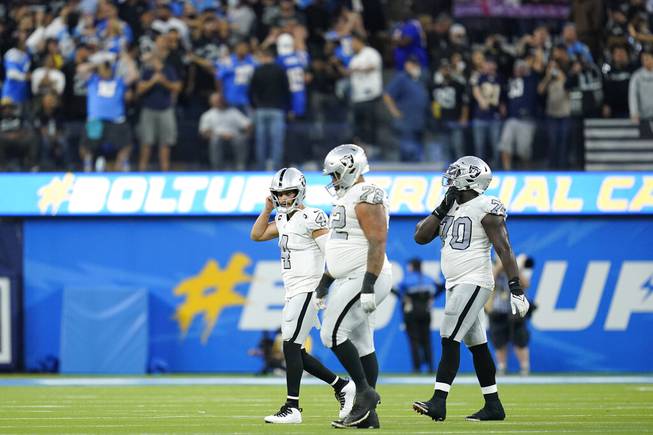 ‘A bizarre night’: Raiders’ slow-starting ways cost them in loss to Chargers

Las Vegas Raiders quarterback Derek Carr, left, and teammates walk off the field after an interception during the second half of an NFL football game against the Los Angeles Chargers, Monday, Oct. 4, 2021, in Inglewood, Calif.

Silence spread over the crowd at SoFi Stadium when the Raiders’ first pass on Monday night ended with their surest-handed receiver dropping a ball delivered right to the middle of his body.

Hunter Renfrow recovered from the uncharacteristic gaffe to play well against the Chargers, but the third-down conversion attempt slipping out of his fingers wound up representative of the night. Something was just off as the Raiders fell for the first time this season, 28-14, in front of a partisan crowd on the road.

“This was a bizarre night for all of us,” Raiders coach Jon Gruden said.

Silver and black engulfed the four miles from Los Angeles International Airport to the Chargers’ new $5 billion home from mid-Monday morning. It was a reunion of sorts for a franchise that remains immensely popular in Southern California with jerseys from all eras and “Raiders” chants acting as precursors to a celebration of the team’s best start in nearly 20 years.

But then the party was delayed 30 minutes with lightning strikes visible from the open-air section behind the stadium’s end zones and it started to feel like the guests of honor never showed up. Las Vegas never gave itself much of a chance to improve to 4-0 and emerge as the AFC’s last unbeaten team on its second and final appearance on Monday Night Football this season.

The Raiders gained only one first down in the first half while the Chargers piled on three touchdowns behind the arm of second-year quarterback Justin Herbert.

“Not just a slow start — a slow half,” Renfrow said. “We played pretty bad in the first half, so that’s something we’ve got to get better. Look ourselves in the mirror and get better.”

That’s something Las Vegas had talked about coming into its AFC West opener considering it fell into first-half holes in each of their first three games including trailing 14-0 to both Miami last week and Baltimore in Week 1. But those were a little different because the Raiders at least showed some early firepower.

There was none against the Chargers with all their biggest problems flaring up in one spectacular 30-minute blaze.

The offensive line was the main incendiary as it could provide neither any protection for quarterback Derek Carr — who got sacked twice early and four times total — nor much push for a ground game. Rookie right tackle Alex Leatherwood’s rude welcome to the NFL continued as star edge rusher Joey Bosa continually schooled him.

Raiders Pro-Bowler Josh Jacobs returned at running back after missing the last two games but could manage only 40 yards on 13 carries after constant contact around the line of scrimmage. Las Vegas’ defense held the best it could — including four straight drives without allowing a first down in the first half — but Herbert eventually took advantage of a rash of injuries that claimed the team’s second and third cornerbacks Trayvon Mullen and Damon Arnette, respectively.

The reigning Rookie of the Year threw for 222 yards on 25-for-38 passing, beating the Raiders for the second straight time dating back to late last year.

“Your feelings are going to get hurt in this league sometimes,” Gruden said. “Certainly, ours are hurting right now.”

Gruden didn’t express much depression otherwise, however, as he was ornery and even optimistic after the loss. He took exception to both the weather delay and SoFi’s visiting locker rooms — “like a maze” — and pride in how his team handled the 21-0 halftime deficit.

The Raiders scored on their opening two drives of the second half, with Carr doling out picturesque touchdown passes to Renfrow and tight end Darren Waller.

First, Renfrow fooled Charger rookie cornerback Asante Samuel Jr. on a double, if not triple, move for a touchdown catch across the middle of the field in the end zone. Then, about seven minutes later, Waller skied over Charger safety Nasir Adderley for a catch in the corner of the end zone.

Waller spiked his helmet on the ground as he sprinted back to the Raiders’ sideline, “trying to get the team live and back in it,” with the score suddenly a manageable 21-14.

“We fought back to put ourselves in position to make a dramatic comeback tonight,” Gruden said. “We just didn’t make the plays.”

Las Vegas’ defense made one more stop, but Los Angeles burst out of its slumber to send the visitors home empty-handed from there.

After a 50-yard completion from Carr to Henry Ruggs — who had three catches for 60 yards total — the Chargers bore down. They collapsed Carr’s pocket, leading to defensive tackle Christian Covington getting a decisive sack on third-and-3 from the 28-yard line with 11 minutes remaining.

“I think that our offensive line is battling,” Carr said. “They’re doing a great job. We’re still able to throw the heck out of the ball. When you throw it a lot, try and throw deep shots and take shots and all that kind of stuff, sacks are going to happen, pressures are going to happen.”

Daniel Carlson missed a 52-yard field goal after Carr took the sack, and the Chargers sent the large Raiders’ contingent to the exits early on their next drive. Herbert led a 10-play clock-draining possession capped by running back Austin Ekeler scoring on an 11-yard touchdown run with five minutes to play.

Ekeler had 18 touches for 135 yards and two touchdowns. He did almost all of his damage at the beginning and end of the game.

Gruden was “proud” of how Las Vegas played overall in between but puzzled on how he can find a way to prolong those stretches. There were a lot of things that happened on Monday that he couldn’t quite comprehend.

Raiders can’t claw back on Chargers, fall for first time this season