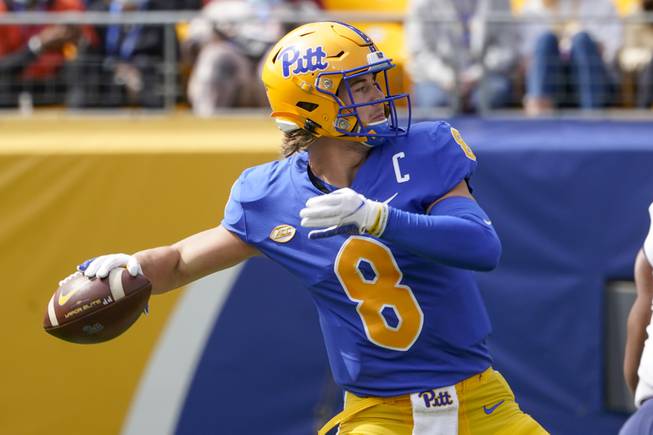 College football by the odds: Vegas preview and picks of every Week 6 game

Betting odds painted the ACC as the least competitive Power Five conference coming into the season. Less than halfway through the year, betting odds have now done a 180 and have the ACC as the most wide-open league.

The Tigers’ disappointing season is the major driver of the odds change. Clemson was a late Boston College fumble in the red zone from losing its second straight ACC game last Saturday, holding on for a 19-13 victory.

The Tigers are still the most likely ACC champion, assuming they can find any semblance of offense, but their vulnerability has created a feeding frenzy on prices of other contenders. I got in on the ACC futures action last week after Clemson’s loss to NC State but to mixed results — taking shots on Pittsburgh at 17-to-1 and Miami at 22-to-1.

The former looks like great value but the latter is now 32-to-1 after a 30-28 loss to Virginia. Pittsburgh may still be worth a look at around 5-to-1 given the conference’s best offense with veteran quarterback Kenny Pickett, but I wouldn’t recommend any play at the current prices. The ACC is too volatile.

Read below for picks on every Week 6 game, with write-ups on the biggest contests and some of the strongest positions. Lines are the best currently available in Las Vegas on the chosen side. Picks are labeled in three separate confidence categories — plays, leans and guesses.

Oklahoma -3.5 vs. Texas in Dallas, over/under: 63.5. Oklahoma’s defense has been quietly solid and playoff-caliber over the last two years since coordinator Alex Grinch got settled in. It’s the offense that has dawdled, but the Sooners have too much talent for that to last forever. Spencer Rattler and Co. eventually broke out last year, and they showed signs they’re on the verge this year in last week’s 37-31 win at Kansas State. Play: Oklahoma -3.5.

Georgia -14.5 at Auburn, over/under: 45. The betting market has been oddly low on Auburn all year with the trend continuing here in the form of a couple extra bonus points. The Tigers have the most talented defense, led by a deep pass rush, the Bulldogs have faced since a season-opening 10-3 slugfest with Clemson. To lay more than two touchdowns, I’d want confirmation that Georgia quarterback J.T. Daniels is fully healthy — something hasn’t happened all season. Lean: Auburn +14.5.

Arkansas +5 at Ole Miss, over/under: 66. Last week’s final scores aren’t misleading in this case, as the Rebels hung with the Crimson Tide in a 42-21 loss much better than the Razorbacks managed with the Bulldogs in a 37-0 defeat. That’s just another data point supporting my perception coming into the season that Ole Miss was a level above Arkansas and should be separated by at least a touchdown. Play: Ole Miss -5.

Penn State +2.5 at Iowa, over/under: 41.5. Maybe Iowa will continue to get all the turnover luck, as it did for yet another week in a 51-14 win over Maryland as 3-point favorites last week. In fairness, it’s more than good fortune at this point as the Hawkeyes have consistently stolen possessions for years. But they’re leading the nation in turnover margin this year at +12 and it should regress at some point. Why not start against the best team Iowa has seen yet? Lean: Penn State +2.5.

Michigan -3 at Nebraska, over/under: 52. Don’t laugh, but what if this is the year and Michigan is a real Big Ten conference championship threat? Aside from a sloppy second half against Rutgers, the Wolverines have looked the part all year. They’ll have the best defense the Cornhuskers have seen to make selling high with the also-hot home team an attractive option. Lean: Michigan -3.

Alabama -18 at Texas A&M, over/under: 53. Justified or not, this is the very definition of an inflated point spread. Two weeks ago, this number was at -10 in Game of the Year lines with Texas A&M still viewed as having the best chance to trip Alabama up. More evidence has made that feel like more of a long shot, but the Crimson Tide lacks just enough offensive explosiveness and looked just flustered enough in its one true road game to give Aggies’ fans a smidgen of hope. Guess: Texas A&M +18.

Wake Forest -6.5 at Syracuse, over/under: 42.5. The Orange’s defense has been a revelation this season, ranking just outside the nation’s top 25 in allowing 4.7 yards per play against Football Bowl Subdivision opponents. Wake Forest’s dynamic offense won’t be able to run free like it has so far this season. Play: Syracuse +6.5.

Wisconsin -8.5 at Illinois, over/under: 42.5. One last chance for the Badgers, which have probably taken too much heat for their admittedly pathetic 1-3 start considering they’ve played the nation’s toughest schedule per the SP+ ratings. That changes here as Wisconsin is just an upgraded version of what Illinois hopes to become under new coach Bret Bielema. Play: Wisconsin -8.5.

Oregon State -4 at Washington State, over/under: 59. There’s nothing fluky about the Beavers’ four-game straight-up and against the spread winning streak, even though the betting market’s sluggishness to adjusting upwards may indicate otherwise. The Cougars don’t have the rush defense that slow the Beavers’ creative, explosive ground game. Play: Oregon State -4.

Memphis +4 at Tulsa, over/under: 62. The defense that propelled Tulsa to a breakout season a year ago is gone and it’s causing problems with the Golden Hurricane not built to keep up in shootouts. It should be another issue here with the Tigers’ offense flying high on a weekly basis behind freshman quarterback Sean Henigan. Play: Memphis +4.

Utah +4 at USC, over/under: 51. From a personnel standpoint, this is a fair number. From a coaching and situational perspective, it’s way off. The Utes are coming off of a bye week and almost sure to play better going forward behind veteran coach Kyle Whittingham while the Trojans are playing their sixth straight game, now behind an interim coaching staff. Play: Utah +4.