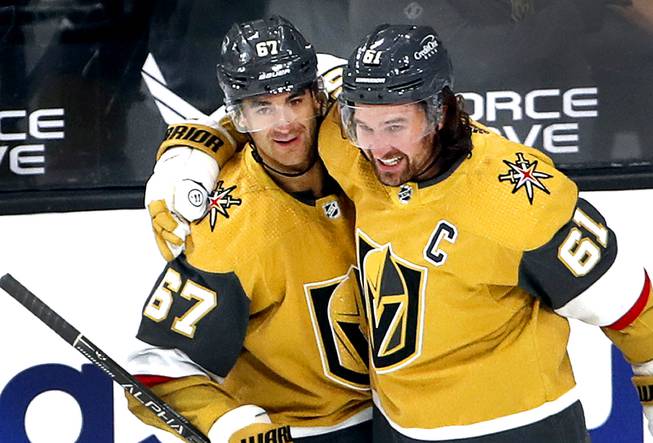 Preseason expectations have never been higher for the Golden Knights, according to the betting market. Here are three places where that’s most evident.

■ In future odds to win the Stanley Cup at the Westgate Las Vegas SuperBook, the Golden Knights are co-favorites with the Avalanche at 5-to-1. That’s the lowest they’ve ever been coming into a season, as they were 9-to-1 in 2019 and 10-to-1 last year.

■ Similarly, lines are up for most teams’ first games, and there are only two spots where the favorite is priced higher than -200 (risking $2 to win $1). The Golden Knights are one of them, installed as a -240 favorite over the Seattle Kraken on October 12.

If the Golden Knights’ front office had an approval rating, it would have taken a nosedive this past summer and still be firmly submerged heading into the upcoming season.

Fan support of President of Hockey Operations George McPhee and General Manager Kelly McCrimmon appeared to plummet in July, when the duo traded face-of-the-franchise goalie Marc-André Fleury to the Chicago Blackhawks for nothing beyond cleared cap space. It seemed to sink even further when it became apparent the Golden Knights wouldn’t add a splashy big name, instead focusing on incremental changes.

Timing also played into the local response. Emotions remained raw just a month after Vegas had bowed out of the Stanley Cup Playoffs at the hands of the seemingly beatable Montreal Canadiens in the semifinals. It also didn’t help that Fleury had just been awarded his first career Vezina Trophy as the league’s most valuable goalie.

But even now, some time after the initial uproar, wounds remain raw. Some fans say they don’t feel the same passion for the team, threatening to stay away from T-Mobile Arena this season.

Fans—or former ones—will feel how they feel about what’s gone down with Las Vegas’ most beloved sports franchise. But the smart money is on all the defectors and discontents getting over it and coming back before long.

That’s largely because the 2021-2022 Vegas Golden Knights are going to be too good to ignore or disown. The “Fortress” will be rocking, the highlights flowing and the wins piling up—quite possibly more than ever before.

Even minus Fleury and without significant additions, Vegas is poised to challenge for the President’s Trophy, awarded to the league’s top point-producing team, and, ultimately, the Stanley Cup.

It might not seem like Vegas came all that close to the latter last season, considering Montreal won the semifinal series in six games, but it was undoubtedly close to the former. The Golden Knights and Avalanche technically tied for the league’s top mark, but Colorado held the tiebreaker by way of victory in the penultimate game of the regular season.

That was the infamous contest in which Vegas became the first team in a decade to suit up only 15 skaters, largely because of salary-cap restraints borne out of keeping a pair of high-priced goalies in Fleury and Robin Lehner.

With Fleury gone, there are fewer roster holes this season. In fact, at press time, it looks like the Golden Knights might have more NHL-ready forwards than they can even accommodate.

Captain Mark Stone said he’s never played with a better group of forwards in his career. Assistant captain Max Pacioretty deemed the group the deepest Vegas has ever assembled.

It’s difficult to argue otherwise, especially considering McPhee and McCrimmon made a long-overdue philosophy shift with their fourth line by prioritizing scoring over hitting. That meant making another controversial move by trading fan favorite Ryan Reaves to the New York Rangers, but the team’s efficiency should improve because of it.

Nicolas Roy and Keegan Kolesar, each of whom played a lot on the third line last year, should slide down and skate alongside underrated mainstay William Carrier in this year’s final group.

On the third line, new acquisitions Nolan Patrick and Evgenni Dadonov—both of whom have shown scoring ability in the NHL despite subpar seasons last year—could provide an offensive punch alongside Mattias Janmark, who produced a memorable Game 7 hat trick against the Wild in last year’s playoffs.

The top two lines are unchanged, as they should be. Few teams in the NHL, and none in Vegas’ Pacific Division, boast a better top six.

After a season in the rugged, pandemic-realigned West Division, the Golden Knights also have a soft Pacific Division going for them. Gone are the Avalanche, a historically dominant team, analytically speaking, last season, and the Wild, which presented consistent problems for Vegas, replaced by flawed teams. At Westgate Las Vegas SuperBook, 13 teams in the league are listed at lower than 30-to-1 odds to win the Stanley Cup, and the Golden Knights (5-to-1) are the Pacific’s only representative in the group.

The Golden Knights’ defensemen further separate the team from its Pacific Division rivals. Alex Pietrangelo was Vegas’ best player last postseason, flashing the ability that led McPhee and McCrimmon to lock him up with a seven-year contract two free-agency periods ago.

Shea Theodore might be the team’s most valuable player overall, and he’s just now entering his prime after turning 26 years old in August. And re-signed veteran Alex Martinez revitalized his career over the past two seasons with Vegas.

If either Dadonov or Patrick can follow Martinez’s trajectory, the Golden Knights should be able to endure without Alex Tuch, out indefinitely to start the season while recovering from shoulder surgery.

The announcement of Tuch’s absence came the same week as the Fleury and Reaves trades, adding to fan negativity. But it’s long past time to re-litigate the way McPhee and McCrimmon handled the offseason. Healing should be the focus now, and the best remedy is winning—something the Golden Knights should do plenty of this season.