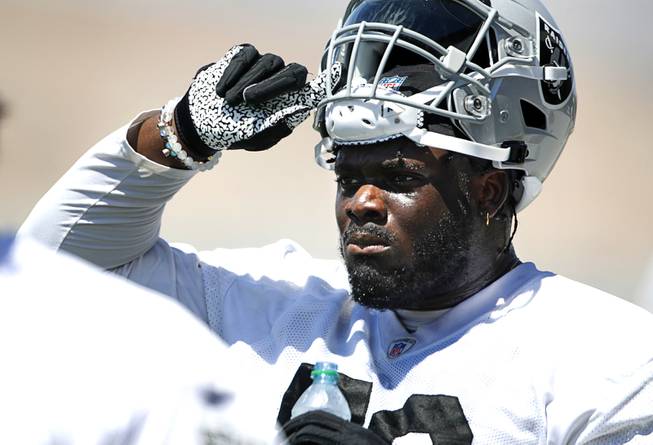 The Raiders didn’t make Alex Leatherwood their surprise selection with the No. 17 overall pick in April’s NFL Draft just because they judged him to be the best prospect available. No, the Las Vegas braintrust also weighed his pro-readiness as a major factor, as the team was going through an offseason reconstruction along the offensive line and needed a right tackle capable of holding down the fort from Day 1.

So far, Leatherwood has not proven to be the plug-and-play solution the team had hoped.

The Alabama product has struggled through the first quarter of the season, especially in pass protection, and it came to a head in the team’s 28-14 loss to the Los Angeles Chargers on Monday Night Football. The 6-foot-5, 312-pound rookie went head-to-head with ace pass rusher Joey Bosa, and the sack artist got the upper hand.

Bosa notched a sack and recorded seven QB pressures, with most of that coming when lined up opposite Leatherwood.

Bosa set the tone early; on Las Vegas’ second offensive possession, he used an outside move to blow by Leatherwood and hit the arm of quarterback Derek Carr, forcing a fumble:

That play seemed to get into Leatherwood’s head. On the Raiders’ next offensive snap, he came out of his set early in an attempt to get a head start on Bosa’s rush. He was flagged for a false start:

Leatherwood simply couldn’t contain Bosa coming off the edge. On this play, Bosa again swept past the rookie with ease and got a free run at Carr; only Carr’s quick decision making and fast release saved this from becoming another strip-sack:

Later in the game the coaching staff made an effort to give Leatherwood help against Bosa. Sometimes that meant keeping a tight end on his side to block, sometimes it meant chipping him with a running back, and sometimes it meant sending pre-snap jet motion toward Bosa in an attempt to occupy him for a split second longer. It helped—a little.

On this crucial 4th-and-3, the team used a running back to chip Bosa before releasing into the flat. The chip kept Bosa from coming around the edge, but he simply went to a bull rush and drove Leatherwood straight back into the pocket instead. Though Leatherwood stayed in front of him, Bosa was able to help collapse the pocket and force Carr to throw to the RB—who had to stay in to chip, remember—well short of the first down marker:

It’s not just a one-game sample size for Leatherwood. Through four games he has allowed four sacks and 18 QB pressures, numbers that would make him all but unplayable at right tackle unless he shows drastic improvement throughout the season.

There is a possibility the team could move Leatherwood to guard for now in an attempt to take advantage of his strengths (power, toughness, short-area agility). That could provide a temporary solution—especially with a matchup against the Chicago Bears and outside linebacker Khalil Mack looming on Sunday.

If the Raiders want a full return on their investment, however, Leatherwood is going to have to start playing like the bookend tackle they drafted him to be.

College football by the odds: Vegas preview and picks of every Week 6 game